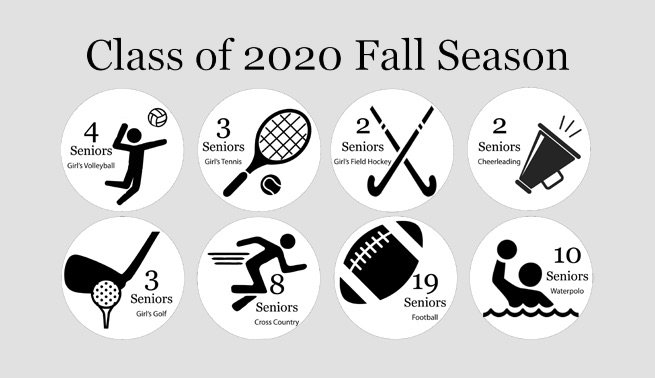 As senior Sanaz Ebrahimi reflects on her lacrosse career at Paly, she remembers when the sport was just a hobby. However, after joining a club, everything changed. Lacrosse has become more than a sport to Ebrahimi, who is going into her senior year. She knows that she has a community of people with the same goals: wanting to help one another.

Fall kicks off the start of Paly seniors’ last year of sports as they prepare for their final season of high school competition and the camaraderie that sports bring. After three years of intensive practice schedules, dedication and hard work, their senior year serves as a culmination of their devotion and skills.

Paly’s class of 2020 has played an integral role in the introduction of several  inaugural sports, including the first boys volleyball team and first field hockey team. Vikings have shown their athleticism, whether it be on the court or on the track. As they enter their final year of high school athletics, many seniors plan to continue their sporting career in college and beyond.

According to Ebrahimi, who is a girls lacrosse defensive player, Paly boys and girls lacrosse teams are leaving the Santa Clara Valley Athletic League and entering the Central Coast Section, a more competitive league which requires more teamwork and effort from players.

“I definitely think our team will have to really come together and learn to play with each other fast so that we can have a chance at the championship,” Ebrahimi said.

“The competition near the end of the season is going to increase dramatically,” Dwight said. “My goal is to provide a consistent (number) of goals in these more difficult games. I hope that I can also slow down the tempo on offense when required so that our defense can catch a break.”

Performing well and winning games seem to be the greatest motivators for teams to improve this year, as is for senior Teddy Butler, who is on the two years old boys volleyball team.

Especially as a senior on the team, Butler recognizes his additional responsibilities as a leader and is focused on prioritizing the team’s goals over his individual aspirations.

“My goal is to come together as a team so we can win as many games as possible,” Butler said. “Winning as a team is more important than my individual achievements.”

After three years of sports, the now senior class has had many experiences that have helped them grow and learn as both players and people. Senior football lineman Bryon Escarsega-Calderon said he learned the importance of training and a positive mindset through his experience on the football team.

“My mindset has definitely changed for the better,” Escarsega-Calderon said. “I’m doing a lot more training than I was in freshman year, and it’s just something that I feel I want to do for the rest of my life.”

Butler said that throughout his sporting career, the biggest impact on him has been from Dan Starrett, or “Superfan Dan,” whose cheers and support at nearly all the games have been widely appreciated among the Paly sporting community.

While some athletes opt to play their sport for fun after high school, others plan on entering college at either the Divisions I, II or III. Senior pitcher Dean Casey hopes to play baseball at the collegiate level.

“I plan on either playing D3 or Ivy D1 in college, depending on where I get recruited,” Casey said.

Whether playing after high school for collegiate teams or not, these athletes hope to continue their sports in one form or another.

“My goal is to keep lacrosse in my life because it has helped me develop into the person I am today,” Ebrahimi said.