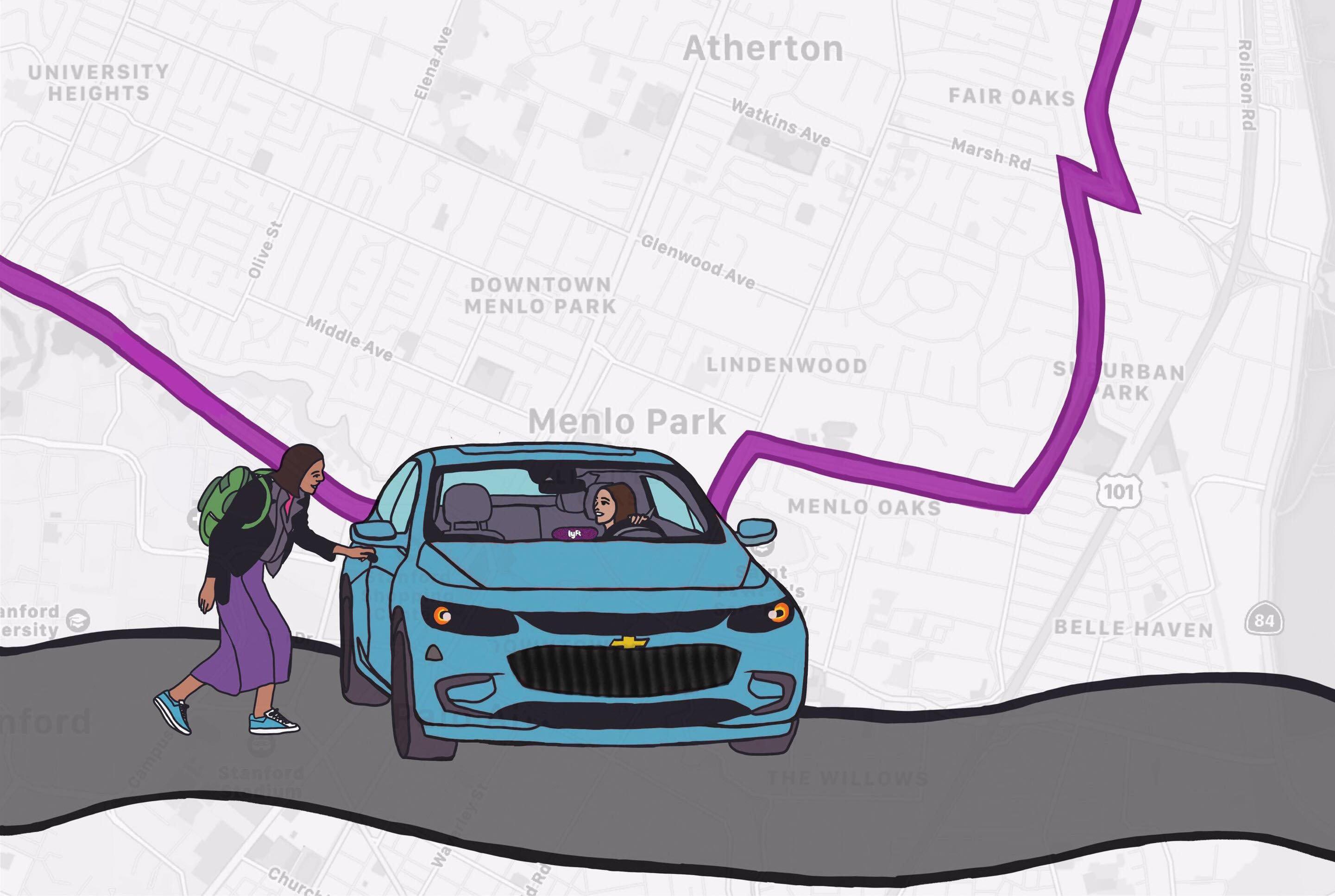 Hesitantly stepping into the dark abyss, or rather, a 2012 grey Prius, a Paly junior, who agreed to be interviewed only if his name wasn’t used because he fears termination of his rideshare apps, greets the driver with a simper. His particularly young age is confronted by the driver in which he falters unnervingly. Unperturbed, the driver speeds off, nonchalantly driving off with an unattended minor.

Students often face a myriad of dilemmas over the intricacies of transportation. Whether it be over the Caltrain, the bi-hourly shuttle system or the Valley Transportation Authority Bus, many students don’t find most of the available options feasible. Unaware of any other methods that are both safe and convenient, they resort to rideshare apps like Uber or Lyft.

Despite the volume of minors utilizing these apps, the rideshare app companies continue to abide by their policies. Uber explicitly states in its terms and conditions that, “A rider must be at least 18 years of age to have an Uber account and request rides. Anyone under 18 must be accompanied by someone 18 years of age or older on any ride.”

It’s not Uber or Lyft’s responsibility to ensure that each user is of age. According to Uber and Lyft’s policies for its drivers, the onus is on the driver to determine the validity of each passenger’s age. Uber states on its website, “As a driver-partner, you should decline the ride request if you believe the person requesting the ride is under 18. When picking up riders, if you feel they are underage, you may request they provide a driver’s license or ID card for confirmation.”

However, some minors choose to simply lie, telling their drivers that they are 18.

“One time, someone (a rideshare driver) was making sure that I was old enough,” he said. “Obviously, I lied.”

Many students and parents aren’t aware of these policies and use rideshare apps unknowingly.

“My parents weren’t made aware (of rideshare apps’ policies against unaccompanied minors) in the beginning, but we had this conversation at one point, and they realized I’m not allowed to, but, regardless, they still let me go anyways,” he said.

Students battle with the moral dilemma of dishonesty, especially when making the choice of whether or not to violate rideshare apps’ policies and the law.

“Honestly, it’s kind of frustrating that this (rideshare apps) is what I have to resort to. I’m not even going to lie, I feel pretty guilty whenever I do ride these services because I feel like I’m straight-up lying as a front.”

Another Paly junior who would only be interviewed if her name wasn’t used since she also fears revocation of her rideshare apps, said she faces the same transportation issue, often having to use Lyft whenever in dire need.

“A lot of people think I’m older than I actually am, which doesn’t always go well, but I haven’t really felt unsafe in a Lyft. But there have been drivers who have been flirting with me and I can’t tell them that I’m under 18 because I’m not allowed to be under 18.”

The possible risks of safety involved while using rideshare apps are taken into consideration, but the pros often outweigh those risks.

“My parents have very few concerns because they want me to be safe, but they know I can take care of myself,” she said. “I usually keep a knife on me whenever I’m going in a Lyft car. It just makes me feel safer to have something to protect myself.”

A father of former Menlo-Atherton High School students, who agreed to be interviewed only if his name wasn’t used because he allows his underaged children to use rideshare apps, said he wasn’t too concerned about his children’s safety because they were already relatively old when they started using the rideshare services.

“There were some awkward situations that obviously weren’t great,” he said. “They would do the Uber Lines or Lyft pools and get some other people in the car as some drunk guy got in the car one time.”

Despite safety concerns, many parents still utilize rideshare apps. “I think you’re concerned about that in any instance, and it doesn’t need to be an Uber or Lyft driver. It can be anywhere in your life. And genuinely, I sort of trust people, so I feel like there’s not a big risk there,” the parent said.

For many parents, Uber provides services to their children that they can’t offer, often saving hours upon hours of what would’ve otherwise been wasted time.

“By large, the amount of time and energy I had to put into driving my kids around versus having a service do it was a fairly significant benefit,” the parent said. “It was pretty crippling when we had younger kids and they had various after school activities having to take time off work to take them places and do things was bad for everyone involved.”

The popularity of Lyft and Uber among minors remains prevalent despite alternative rideshare options specifically designed for minors existing.

“There might have been other services, but we (them and their spouse) weren’t made aware of them at the time and they were hard to figure out,” he said.

Kidzjet, a rideshare app designed and tailored for children, was founded in 2013 and operates in the San Francisco Bay Area as well as the Los Angeles area. Distinguishable by the big white van they use alongside their plastered green and yellow logo, they can be seen across Palo Alto, especially around elementary and middle schools.

When the student was first introduced to the service, she noted that it lacked the same appeal as other apps.

“I feel like it’s different as a middle schooler than as a high schooler as kids don’t really want to be seen getting into a big white van that says KidzJet,” she said.

When addressed with all available modes of transportation for minors, many face the moral plight of violating policies in the face of convenience, timeliness and economic reasons. But through an emerging culture, the policies are being rendered futile and even illogical given how many minors rely on this app as their mode of transport.

Often having to find a balance between convenience and dishonesty, students find themselves questioning their morals and how to make do with the given circumstances.

“I definitely feel a sense where it’s (using rideshare apps as an unaccompanied minor) unethical,” he said. “I wish there was something else I could use instead.”