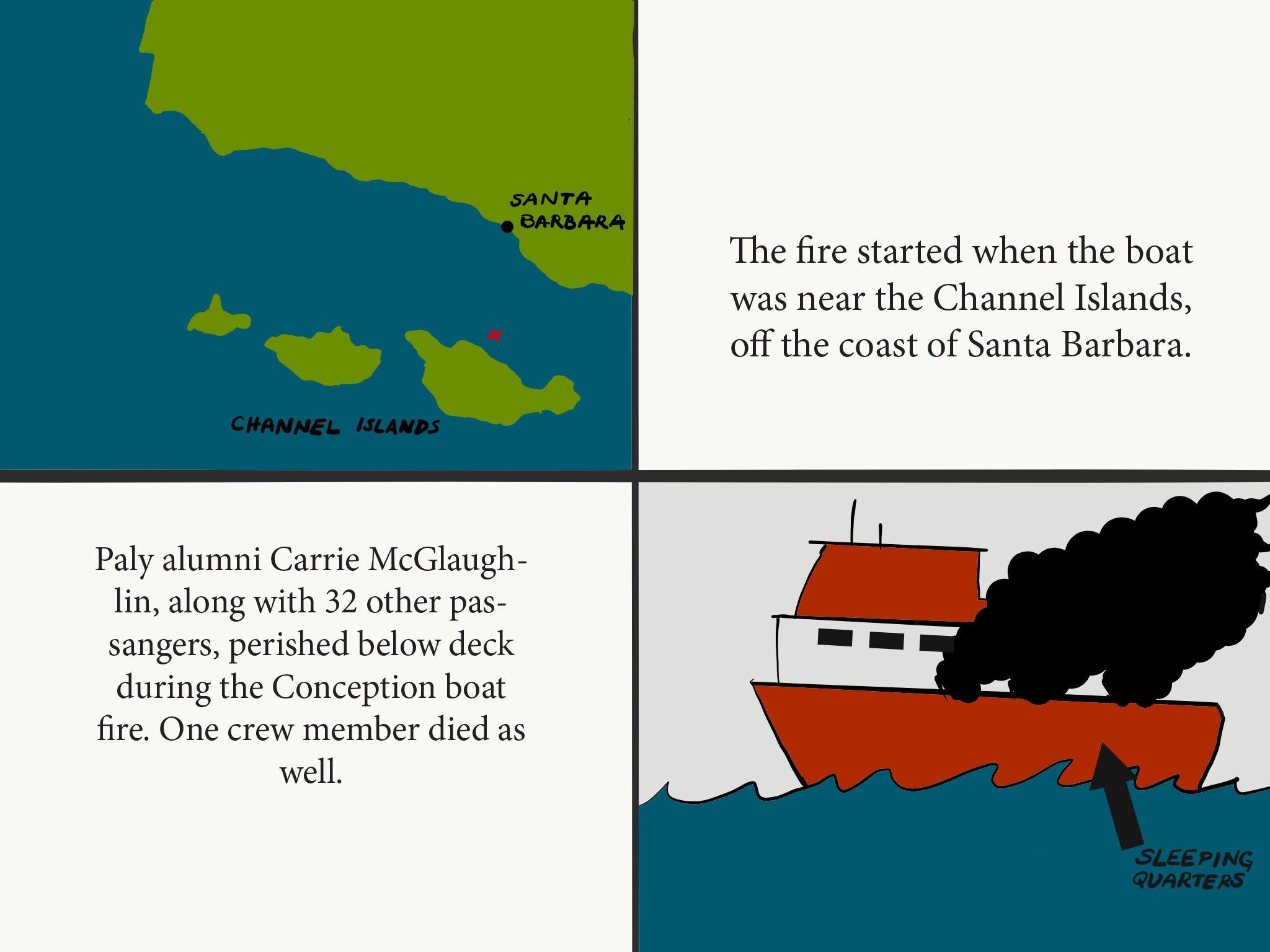 A horrific fire aboard the scuba-diving boat Conception earlier this month claimed the life of 2001 Paly graduate Carrie McLaughlin.

McLaughlin, a 35-year-old Oakland resident, was a fervent activist for women’s and LGBTQ rights, according to her father, Don McLaughlin.

“She was very passionate,” McLaughlin said. “She drew and painted every day of her life.”

Ms. McLaughlin was one of the 33 passengers who perished while on a Labor Day weekend recreational dive excursion. Built entirely of wood, the Conception was regularly used for commercial scuba trips but erupted in flames on Sept. 2 near the Channel Islands in Southern California during the final night of a three-day voyage.

Subsequently, the National Transportation Safety Board released a preliminary report mentioning that all six crew members were asleep as the fire began.

The report reveals that one of the crew members awoke to a noise and quickly noticed fire on the sundeck. By the time the crew could take action, it was too late to save the passengers sleeping below deck.

All but one of the six crew members survived by jumping overboard after being unable to rescue the passengers from the burning sleeping compartment.

According to the NTSB, the captain later confirmed the fire did not start in the engine room. No mechanical or electrical issues were reported before the boat took sail.

Investigators are uncertain where the fire began, but do know it started shortly after 3 a.m. However, they do not believe it began below deck.

The descriptions of the fire hit close to home for Palo Altan Mary Nemerov, who was a passenger on a similar boat owned by the same company and taking the same route a few months ago.

“To hear about the fire and what happened, I immediately pictured where all the passengers were because you do go down this staircase, and it’s this pretty small place with bunk beds stacked along the wall,” Nemerov said. “It is very tight quarters, and I could readily imagine that it would have been really easy if a fire happened that you would not have been able to get out of there.”

Despite these concerns, Nemerov found the boat’s staff to be safety-conscious.

“The crew seemed to be really aware of safety and all of the crew were really experienced boaters,” Nemerov said. “Me and my daughter had talked to all of them, and most of them had, if not many, several years of experience on boats.”

The trip that Nemerov took with her daughter Anna was her first  boat excursion of this sort.

Although an overall enjoyable experience, according to Nemerov, there was a concern that arose in her mind one evening during  a barbeque for dinner.

“They had built a barbeque on the deck near where the engine was, and it was a little weird that they were barbecuing meat on top of this wooden boat,” Nemerov said.

A memorial service has been scheduled for McLaughlin, but the family has not released details. to the public.

Editors note: Nemerov is the mother of Lucy Nemerov, a senior and Editor’s-in-Chief of The Campanile.