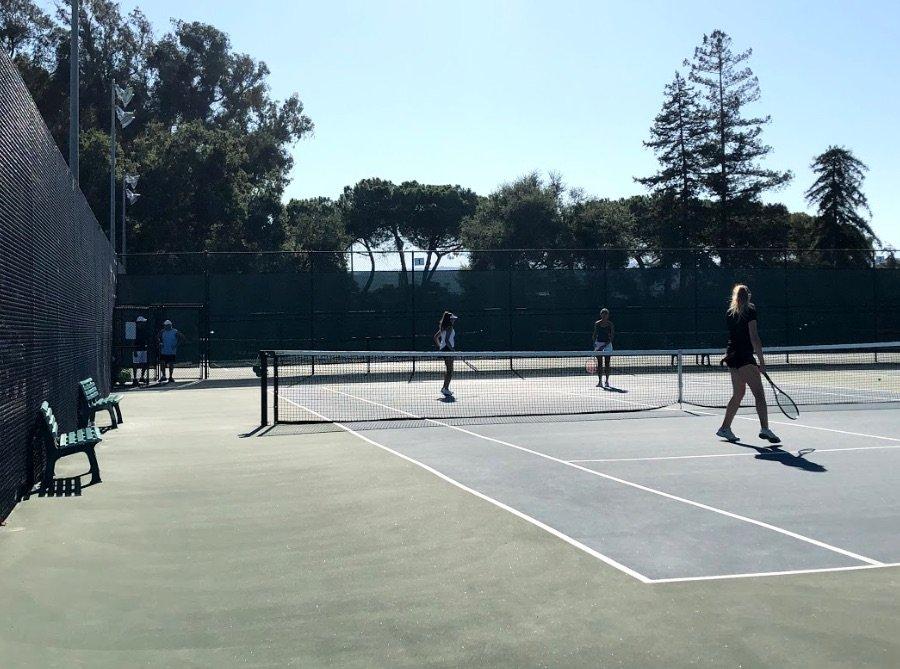 fter playing ten matches and winning six, the girls tennis team have built themselves a strong foundation. According to junior  Anya Yakimenko though, this has not come without hardships. Nevertheless, Yakimenko said the team hopes to continue and finish the season strong.

Last week at the Golden State Tournament hosted at Stanford, the team placed sixth out of 64 teams.

Yakimenko said she was pleased with how the team placed especially because of the high competitiveness of the tournament.

“Many teams from Southern California came up to play for the tournament at Stanford,” Yakimenko said. “It was pretty tough especially due to the aggression other teams played with.”

Although the team was pleased with their placement in the tournament, the aspirations of the team are still set high as they hope to do well in Central Coast Section according to co-captain junior Rachel Owens.

Owens said she hopes to carry the team to victory this season after its disappointing run last year where the team lost in the semi-final.

“We came so close last year.” Owens said. “We are really looking forward to redeeming ourselves.”

The team’s hopes are set high, leading every member to push themselves, striving for the best outcome in their matches, according to Owens. But the opponents are not the only aspect of competitiveness the team has to go through. The team has 16 members, and only a handful of members are able to play,  which leads to some competition within the team.

“With every match, only about 10 team members play, leaving many people fighting for a spot on the court,” Owens said.

However, the team is coming together in hope of beating their number one opponent, Cupertino, according to junior Myra Xu.

Junior Myra Xu is anticipating the team’s upcoming match against Cupertino on Oct. 1.

“Our top competitor this season is probably Cupertino,” Xu said. “We already lost to them once, but we are hoping to come out on top in our next match against them.”

Co-captain and sophomore Kamila Wong said she admires this year’s improvements and hopes the team can move from the De Anza League to a more competitive league.

“I hope that we can place in the top four this season in our league so that we can be a higher speed when we play in playoffs,” Wong said. “I think the team is capable of winning the close matches that we lost last year, mostly because we are a more experienced team this year.”