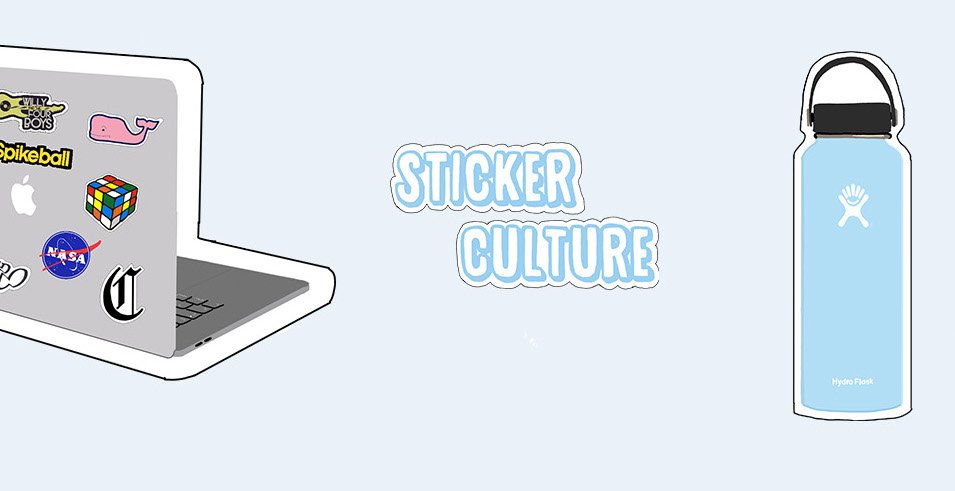 Junior Joey Edmonds’ green water bottle is plastered with stickers, ranging from a Rubik’s cube to Captain America’s shield. According to Edmonds, her stickers represent her personality and the topics she is passionate about — and other students say the same. An online survey of 50 random Paly students through a Google Form distributed on social media showed that 74% of respondents have stickers on their personal possessions — and of those respondents, 97% said they use them to represent themselves.

“I think (stickers) are like a little intro to who I am before you meet me, as well as just being a topic of conversation,” Edmonds said. “It’s a lot more approachable if you see somebody and you already know what they’re into.”

Stickers often operate as conversation starters and can establish similarities between people even before they start talking to each other.

“I could be wearing a plain blue T-shirt and people would not know as much about me as they would see from my water bottle,” Edmonds said.

Seeing a stranger with a sticker from a favorite artist or of a quote from a popular movie can reveal common interests that may inspire people to start talking, according to Edmonds.

“A lot of people are picking them up and placing them on their water bottles and computers, and it’s become a big part of solidifying one’s identity,” sophomore Victoria Liao said.

Stickers are also commonly distributed as keepsakes or prizes at events. Rather than a keychain or an article of clothing, they generally stay permanently attached and go wherever their owner goes. As such, many music artists, like the indie-alternative student band Metro, choose to create and distribute stickers to publicize and start conversations about their music.

According to Marina Buendia, the lead singer of Metro, the band chose to create and sell stickers with their band logo as their first form of merchandise.

“It’s a good starting place to make (merchandise) because it’s pretty inexpensive to make them and you don’t have to sell them for that much,” Buendia said. “And it’s also very good publicity because people put them on their water bottles and sometimes, people will ask each other, ‘What’s this?’ and then start talking about the band.”

On top of mass-produced stickers — for example, those distributed by restaurants like In-N-Out or Boba Guys — more niche stickers have begun to appear on sites like Etsy and Redbubble. All stickers sold on these sites are digitally or hand-drawn by individual users who submit artwork then have it printed on-demand.

Liao chooses to hand-produce her own stickers.

“I first started making my own stickers because the stickers I wanted to buy online were too expensive,” Liao said. “And so I just decided, if I have sticker paper, then why not just do it myself?”

According to Buendia, stickers can communicate the kinds of things people like, such as their unique music taste and the niches that they are part of.

“I think my aesthetic directly correlates to my water bottle,” Buendia said.

These stickers give students a tangible way to commemorate events, places or people they want to remember every day — Buendia said that every time she sees her Golf Wang sticker, she is reminded of Flog Gnaw, a music festival in Los Angeles she attended last year.

“(Making stickers) is just a way of showing my artistic abilities and what I think — if I draw something, for example, and I really like it, I’ll make it into a sticker,” Liao said. “It’s kind of like a way of showing other people parts about me that I can’t really say.”