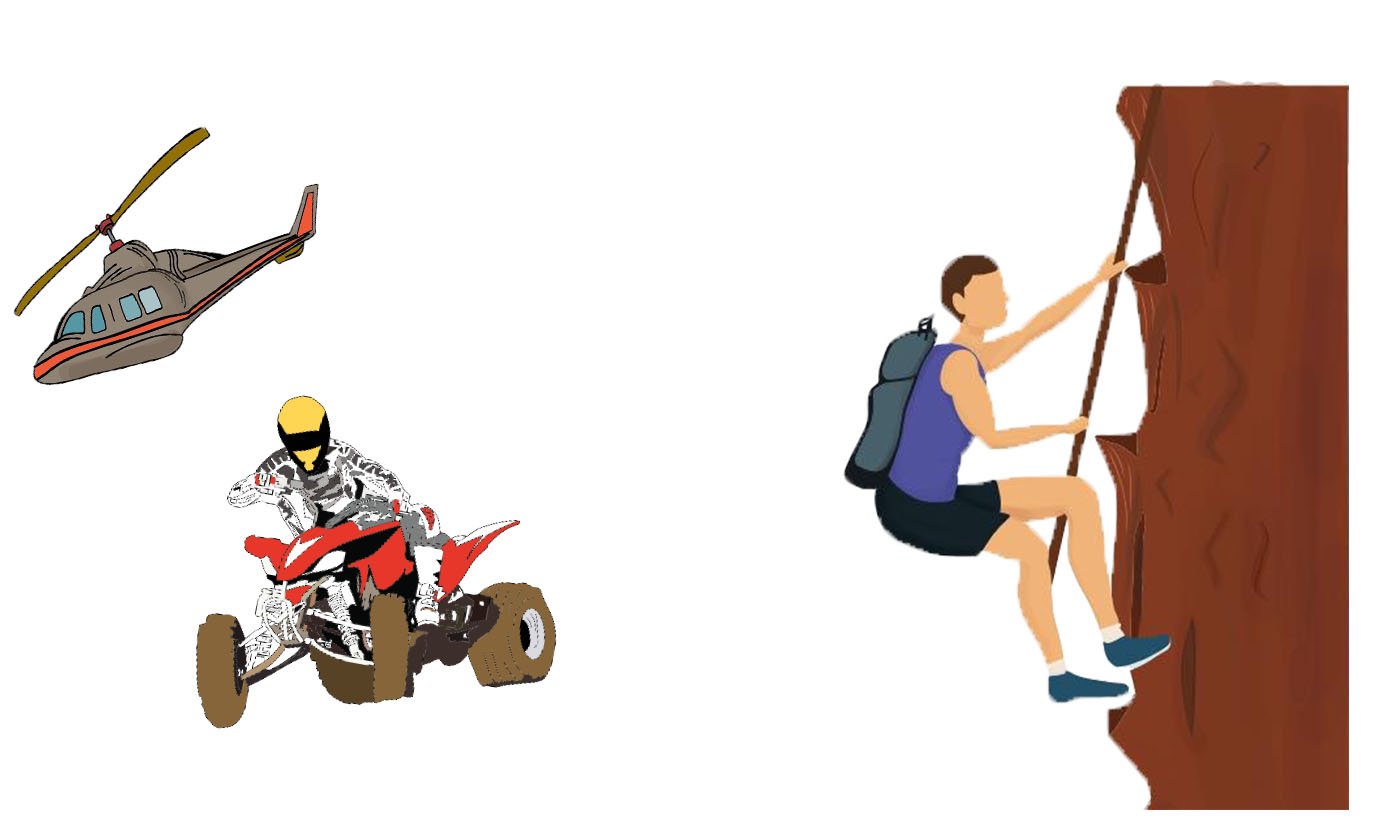 In today’s technology infested world, many seek solace in nature; namely, the mountains. It is common to see people go up the mountains to get exercise, go for a bike ride or to simply explore. However, some thrill seekers decide to take it a step further. Instead of driving, they take All Terrain Vehicles. Rather than simply skiing down the mountain, others prefer to throw themselves off helicopters before “hitting the slopes.” Instead  of a peaceful hike, these adrenaline junkies would rather scale up the mountain on all fours, secured to the rock with almost nothing but their hands. This is the world of extreme mountain sports.

Former Paly student August Ramberg-Gomez reaches the top of a mountain with nothing but a single rope attached to his waist. Ramberg-Gomez is doing one of his favorite activities, free climbing.

The most popular type of free climbing is known as “free soloing,” according to Ramberg-Gomez. This is a type of rock climbing that relies solely on physical body strength to ascend a mountain, boulder or any other route without ropes or other safety precautions. Therefore, this poses to be the most dangerous kind of free climbing, according to Evo Rock and Fitness, a gym that focuses on exercise through rock climbing.

“Most risk can be avoided through proper knowledge of climbing systems and gear,” Ramberg-Gomez said. “Any discussion of risk in climbing is lengthy, but I will mention some of the ways that accidents happen: rappelling or lowering off the ends of your rope, taking a ledge fall, gear failure when you fall, taking a ground fall, slicing your rope and rockfall from above to mention a few.”

One way  free climbers prevent injury is by training with an experienced climber.

“Historically, people generally find a more experienced climber to show them how to safely partake in any of these disciplines,” Rambeg-Gomez said. “A mentor is important to have  as they can correct any mistakes you make before they become deadly.”

Despite the hazards, Ramberg-Gomez, has found a love for the sport.

“I enjoy climbing because it gets me to really crazy locations on beautiful rock,” Ramberg-Gomez said. “Climbing is slow and meticulous and requires a somewhat analytical mind as certain routes are somewhat like a puzzle which I enjoy.”

Senior Zoe Baghaie feels a gust of wind as dust clouds her goggles as she zooms past green landscape. Baghaie is riding her ATV as part of her family’s annual camping trip. With her father and siblings, they make their way up to the top of the Colorado mountains, paving the path as they go.

Baghaie said she found her love for off-roading at a young age, and has since practiced to master it.

“Since I was born in Colorado, I grew up camping, and first learned to ride when I was six,” Baghaie said. “My dad would take me ATVing which is a form of four wheeling, similar to a dirt bike where you ride on trails and all sorts of terrain.”

Baghaie and her family take day trips up to the Colorado mountains to go ATVing.

“I usually wake up around four or six in the morning to get our gear ready for the day,” Baghaie said. “Before we leave we take an hour or so to make sure we have everything from our helmets to lunch and that the ATVs are in good condition. This includes filling up the gas tanks and strapping them onto the trailer which we connect to the car to take up to the mountains.”

Once they reach the base of the trail, they park their car, and start their journey up the mountain.

“We normally take a three hour trail up to a scenic view or to a lake where we have lunch, then head back down,” Baghaie said. “It’s a lot of fun because its really thrilling and rewarding.”

However, when she was 13,  Baghaie was in a serious accident.

“A few years ago, I tested my ability too much, and went riding in the rain,” Baghaie said. “With a muddy road, and unclear vision, I found myself at the edge of a very steep drop, and before I could take control, I ended up rolling over multiple times, and the ATV fell on my head. Luckily, I only got exterior injuries, one being a cut on the forehead where my helmet got crushed.”

Off- roading comes with risks like these, including losing traction with the terrain. Because of this, off- roaders learn ways to avoid these situations, providing them with a safer ride, according to Baghaie.

“I would say that in really rocky or muddy areas that do not provide a lot of traction, it is safest to get down quickly as possible by pressing on the gas, rather than slowing down which could make you trip and potentially roll,” Baghaie said.

“I would accredit my life to my helmet because if I hadn’t been wearing it, I would have suffered from more extreme injuries, and my life could have been at risk,” Baghaie said.

After her accident, Baghaie took a break from ATVing, but soon after recovering from her minor injuries, was back on her vehicle. She continues to go every year with her family still loves it.

“I enjoy it because of the scenery as well as the adrenaline rush that one gets from speeding,” Baghaie said. The fresh air, the view from the top of the mountains, and the fun of it, is the most amazing feeling. Because I have been ATVing for so long and have encountered a lot of difficulties, I have learned to get back up and keep going.”

While most kids travel to Lake Tahoe to ski and snowboard, Schwan makes the trip to New Zealand to go helicopter skiing.

Helicopter skiing is a type of off- road skiing where people take a helicopter up to the top of a mountain, and ski down without a trail. The helicopter then meets you back at the bottom of the hill, where you fly up to your next location.

When skiing on slopes, there are several dangers involved, like avalanches.

“Since it is off-road terrain, the snow has not previously been skied on or avalanche bombed beforehand,” Schwan said. “In the case that you do get caught under an avalanche, you are supplied avalanche trackers and instructions of what to do if you are caught in one.”

According to Schwan, the unmarked terrain can be dangerous if skiers lose control and or fall.

“Another danger is catching an edge and losing control,” Schwan said. “Since the mountains are steep, if you fall, you will go fast down the mountain. There are lots of obstacles that can come into your paths like a rocky cliff, a tree or a tree well. Running into these can cause extensive injury or even death.”

Schwan said it’s important to be a well rounded skier before trying something this extreme.

“In order to do it, you need to have lots of experience skiing as you will need to be able to make noncontrolled turns on downhill and steep terrain, most the time with lots of heavy snow,” Schwan said. “You will also need to be able to traverse and sidestep up and down the mountain to get to areas that the helicopter can reach you.”

According to Schwan, helicopter skiing is a once-in-a-lifetime opportunity.

“I love doing it because I get to ski on a big, empty mountain with fresh powder and make my own tracks,” Schwan said. “Mountains are absolutely incredible. I love skiing anywhere, but helicopter skiing is truly a breathtaking experience.”