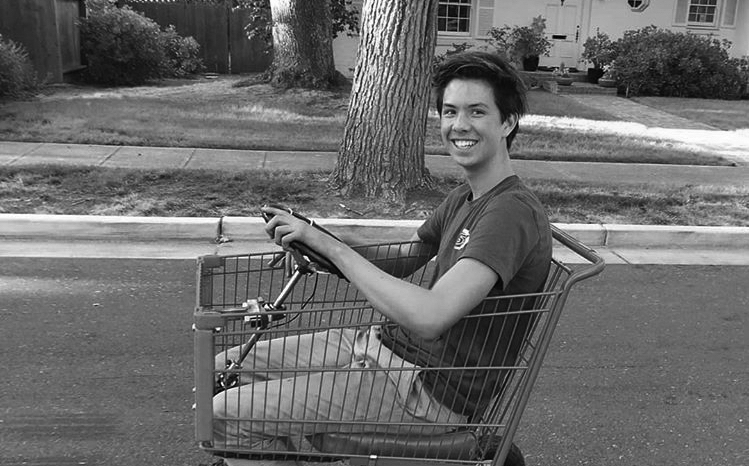 Transportation is an issue that many Paly students struggle with. Whether due to traffic, parking, or other factors, students often complain about how they get to and from school.

However, students are also uniquely positioned to creatively take advantage of resources available to them both inside and outside of school, such as tools, funds and workspaces.

Some Paly students and alumni have taken it upon themselves to find more convenient and creative means of transportation that transcend the traditional biking, driving and walking.

Junior Spencer Soohoo built a motorized shopping cart a few years ago that he uses to drive to and from school.

Soohoo broke down the construction of his shopping cart into three main parts: the initial construction welding components onto the cart and working electronics into the vehicle.

“It uses a universal joint for steering, has a 48 volt 20 ampere hour, lithium ion battery pack and a 1800 watt brushless motor which is attached to a keyed axle,” Soohoo said. “It also uses shimano disc brakes.”

Soohoo welded the spindles, motor mounts, battery holder and mounts onto the axle.

With respect to the electronics, Soohoo said that he soldered connectors for the electronic speed controller, motor, lights and battery. One challenge that Soohoo faced while constructing his shopping cart was wiring it.

“The wiring was tough, because I was using a wire that was way too skinny and kept breaking, so eventually, I had to just buy new wire,” Soohoo said.

Soohoo said he prefers his shopping cart to a bike or car, especially on local streets.

“I don’t have to pedal like a bike, and unlike a car, I can weave through traffic,” Soohoo said.

Regarding the legality of the shopping cart, Soohoo said that he knows it’s illegal, but has never been pulled over by the police.

“Cops are cool about it,” Soohoo said. “I’m not exactly sure which laws I’m breaking but I know it’s illegal.”

Soohoo said his shopping cart goes 30 mph, which makes it fast and convenient to use.

“I put hours and hours of work into it and $800,” Soohoo said. “So, of course, I use it. But on top of that, I really like seeing people’s reactions to seeing me drive by them.”

Before Soohoo got his driver’s license, he said his shopping cart was his favorite method of transportation, and it remains a viable alternative when he cannot use his car.

“(The shopping cart) was way, way nicer than a bike before I got my license,” Soohoo said.

Unlike Soohoo, who built his method of transportation, sophomore Nick Hoffs, who moved to Palo Alto from Orange County before this school year, purchased an electric bike, or e-bike, a few months ago.

According to Hoffs, he first got the bike as somewhat of a bribe — Hoffs was unhappy with the move to Palo Alto, and his parents got him the bike as a consolation.

“It’s a good time to get (a motorized bike) because prices are just going down,” said Hoffs, who purchased his bike for $1,399.

Hoffs rides an Aventon Pace 500 bike, which can reach up to 28 mph. The bike is convenient and allows him to travel fast when he is tired or late, two problems faced by many Paly students.

“I’d say the important thing is getting places faster…when I’m running late,” Hoffs said. “If I’m really running late to school, I’ll just push it to the max, but also when you’re just tired and need to go long distances, it really comes in handy.”

Hoffs also said that the e-bike makes it easier to climb inclines.

“Going up hills is a lot easier,” Hoffs said. “You kind of feel like you have super-strength when you’re going up a hill because you’re pedaling normally and you can just get up, and it makes it way easier and actually fun to do.”

Though Hoffs said he is satisfied with his e-bike, he does have some safety concerns. He said he has felt nervous at high speeds sometimes, due to experiencing speed wobbles.

Another of Hoffs’ concerns with it is the possibility of the technology going out of control.

Hoffs’ e-bike is powered by a battery, and he uses a throttle to activate the bike. However, he has imagined a scenario where the throttle could malfunction and lead to severe and potentially deadly consequences.

“Normally, you have to be pedaling for the throttle to go,” Hoffs said. “If I wasn’t pedalling, but still holding the throttle and I got to an intersection, I would go straight into traffic.”

However, according to Hoffs, there are many factors of the e-bike that makes it more efficient along with the throttle.

“You can either have pedal assist,” Hoffs said, “which is just like all the time you’re pedalling you get a little battery, but the throttle just gives it as much power as possible.”

While Hoffs and Soohoo use souped-up versions of things that are used to transport people or items, one former Paly student turned a different everyday object into a motorized vehicle: a desk.

Peter Martin, who graduated from Paly in May, also built his own desk cart that he drove to school. Martin said he built the desk in his garage using his own equipment.

“I am very fortunate to have a small-scale machine shop in my garage, as well as welders and space to make it,” Martin said. “To put it simply, I built the desk with experience, machine tools and a design.”

Martin’s desk is cheaper than both Hoffs’ e-bike and Soohoo’s shopping cart, with the cost coming in at about $600.

While some people might assume that any motorized vehicle is basically a car, Martin disagrees.

“It’s closer to a bike than a car, and anywhere a bike would normally travel, I would take it there as well,” Martin said.

Like Soohoo and Hoffs, Martin said he prefers his device to a conventional bike, but added that there are pros and cons to his desk.

“It’s better than a bike in the sense that it’s faster,” Martin said. “I don’t have to put any effort into making it move, and I just get to sit down, so it’s surprisingly comfortable. On the other hand, it is quite wide and draws a lot of attention, and it’s heavy.”

Like Soohoo, Martin enjoys the attention he received when spotted on his vehicle.

“It was fun to receive confused looks, to hear people shout out positive remarks, but particularly the high speed, 27 mph in a chair is quite exhilarating, and allows for the joke that we are student drivers or fast learners,” Martin said.

Martin also said he has found the desk to be a calling card for his abilities, and opened up opportunities for him.

“It has become sort of a moving resume, and it is a good, eye-catching demonstration of my abilities and work, and has resulted in work opportunity and recognition,” Martin said.

While students may find the process of building or buying a motorized mode of transportation intimidating, Soohoo expressed the construction of his shopping cart simply.

Soohoo said, “I found a shopping cart, then I welded parts to it, then bolted components onto those parts, then I did electronics. Now it go zoom.”