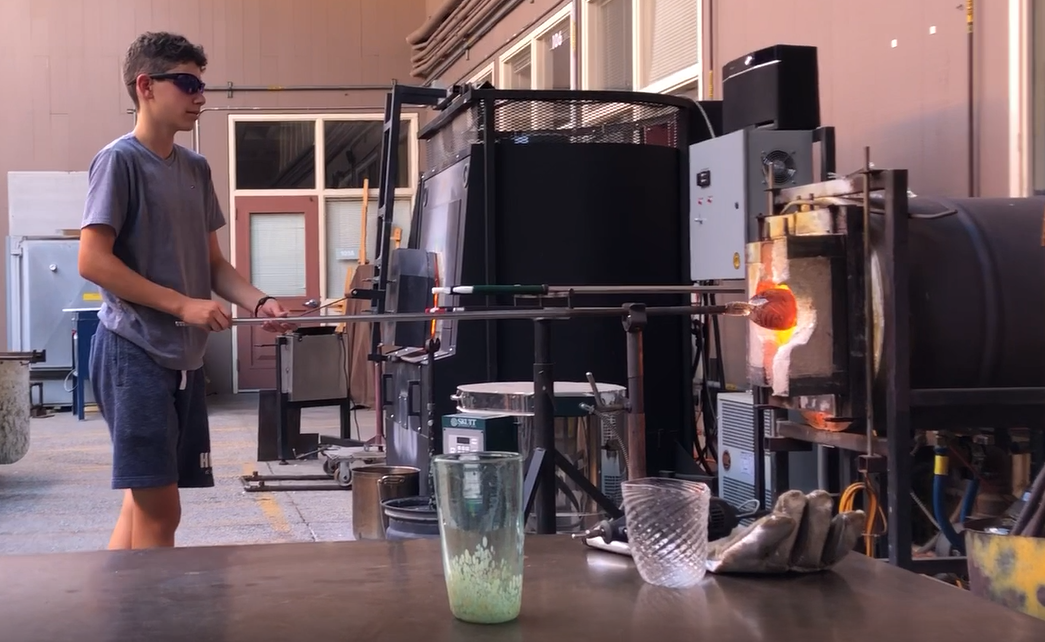 The Call for Creativity

Paly junior Eli Crystal steps back from the 2,100 degree furnace and gently places an elegant teal-colored glass vase with swirls of blue on the cooling rack where the still radiating heat buckles the air around it. Satisfied with his work, Crystal begins preparing a colored glass rod, called a cane, for his next piece.

“I’m really grateful to the school.” Crystal said. “Only six public high schools in the United States offer glass blowing, so without the Fiery Arts program here at Paly, I would never have found my passion.”

For many Paly students, art is just another graduation requirement: a roadblock standing in the way of a successful career in science and medicine. Around campus and across the nation, starving artists are featured in the punchlines of one-liners. As well as being unwarranted, these jokes have no basis in fact.

According to the Bureau of Labor Statistics, the average annual salary for independent artists in the United States was $52,200 in 2018. The national average for all jobs is $56,516, according to data from the 2015 U.S. Census.

Even so, in cities like Palo Alto, with such a high cost of living, students interested in careers as artists have to put an exceptional amount of time into perfecting their craft while still in high school in order to distinguish themselves in their field and build a solid reputation early on.

Crystal has been glassblowing at Paly since he joined the class at the beginning of his sophomore year. He said he’d developed a passion for working with glass from the first time he tried it, and is interested in doing glassblowing as a career.

“Each piece I make takes an average of six hours,” Crystal said. “That’s not (even) counting the time I spend preparing glass for other projects and helping students, since you always need at least one person helping you for safety.”

Time is not his only investment: Crystal said he now buys his own powdered metal oxides since he blew through his school allotment so quickly. Metal oxide powders are used to color glass, and they can cost up to $75 per kilogram in the U.S., according to Crystal. Because the material is often a third of the price or lower in Europe, he has imported hundreds of dollars of color to fuel his work.

Crystal said he has already seen returns on his investments.

“I recently started selling my work,” Crystal said. “A collector bought one of my best vases last week, and I was able to cover the cost of (22 kilograms of) colors. My next step is to open an online store like Etsy so my work is more accessible to potential buyers.”

After high school, Crystal is interested in attending a fine arts school where he can further hone his craft.  Because of his talent and demonstration of entrepreneurship, Crystal feels confident he will have a solid portfolio and application.

Sandra Cernobori is a College and Career Counselor at Paly who works with seniors and juniors in the second semester.

“Students can aim for a BFA, or Bachelor of Fine Arts degree, which is a specialized professional degree.” Cernobori said. “That’s what most art students would pursue. And two thirds of that is studio time. These schools still have some liberal arts classes, but it’s mostly studio time, which is why it’s a very talent based admission process.”

According to Cernobori, arts degrees can be extremely prestigious, and they are desirable in the business and technology worlds as well.

“There is this new idea that the MFA (Master of Fine Arts) is the new MBA (Master of Business Administration),” Cernobori said. “The argument is that artists are more capable of skills like creativity, and (these kinds of thinkers) are who is needed for the jobs of the future, because they’re more flexible.”

When Paly artists are unsure of their future, it is almost always because they have other interests and passions, not because they are worried about a potential lack of success. Senior Jenny Shi has been drawing since a young age, and took up painting in earnest in middle school. Her works, consisting of multiple series of oil paintings, have been featured in exhibitions from LA to DC.

“Art is definitely a viable career pathway,” Shi said. “I’ve sold a couple of pieces, as well as prints. Also, I’ve sold a sculpture and a large painting.”

Even so, Shi doesn’t plan on attending a fine arts school.

“I’m just not sure yet what I want to do in the future since I also have other interests, and I’d like to keep my options open.” Shi said.

According to Cernobori, students’ majors may change or evolve several times over a long career and employers recognize this which is why they tend to put an emphasis on hiring people who can demonstrate flexibility, she said.

“Students majors these days are not always directly related to their future career. The world changes much too quickly,” Cernobori said.

In fact, studies show people typically change their careers two to three times within their lifetime.

“Graduates need to be adaptable, right? And artists are very adaptable,” Cernobori said. “So this is a benefit that they have: they think outside of the box, they’re creative, they’re adaptable. These are skills that translate to a variety of industries and careers.”