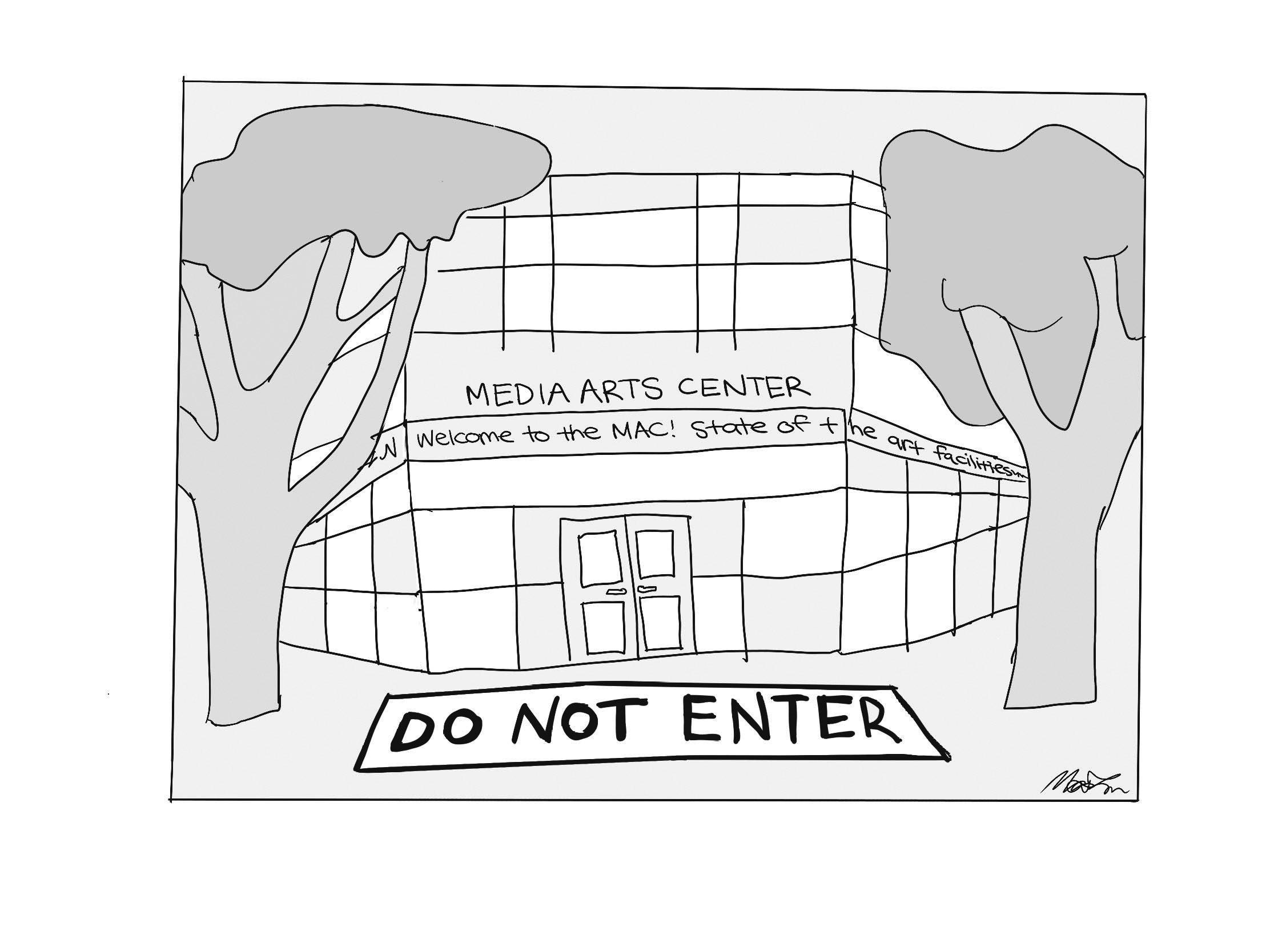 Trial period ought to be implemented to re-open MAC

Walking into the Media Arts Center just one year ago, one was immediately immersed in student life — from groups chattering around a table in the atrium to solemn studiers burying their noses in textbooks in quiet corners, the MAC quickly became the unofficial student union center of Paly.

Surprisingly, this was not the intended purpose of the MAC. In fact, according to journalism teacher Paul Kandell, the initial plan for the MAC was to be an open space for media-centered classes to collaborate using the multitude of resources available for students.

However, not all classes that are held in the MAC are media or arts-centered, and, more importantly, all classes on Paly campus are closed. In other words, the collaboration that justified the cost of the technology and amenities of the MAC did not, and cannot ever happen.

With this knowledge in mind, it makes perfect sense that the student body instead used the MAC’s assets to fit their individual experiences. Whether it was hiding from the weather, running in to print a paper last minute, charging your devices while you study or simply hanging out with friends, the MAC was a place of solace for many students.

These days, dust collects on the tabletops, and the rows of TVs on the walls play 3-year-old InFocus reruns for empty clusters of chairs. “Sorry,” the sign just within the MAC door reads, “but the MAC is no longer supervised, and is therefore not open during your preps, lunch or tutorial.”

Why close such an important student hotspot? According to Assistant Principal Jerry Berkson, the MAC had become overcrowded and loud, making it difficult for classes in session to focus.

Additionally, there were frequently many more students present in the MAC than had preps, posing an additional need for supervision and regulation. For example, Berkson said, the MAC would be left unsupervised if the chaperone on duty had to leave for an emergency.

Berkson continued, saying that having a staff member stuck in the MAC all day isn’t the most efficient use of resources, and because the MAC continued to be left filthy, sometimes trashed by the students, the administration opted to close the MAC instead of devoting more resources to keeping it manageable.

Despite the challenges that come with having many students in one area, it is a larger waste of resources to leave the MAC as it is now. With so much time and money dedicated to providing a space that differentiates us from other top-notch high schools, a place where students can choose to use the incredible resources they think will best benefit them, it seems ironically misguided (although well-intentioned) to shut down the MAC for everything except classes.

To solve this problem, a trial period should be implemented where supervision is returned and there is a check-in system to the MAC. This would effectively stop the problem of students being in the MAC when they don’t have a prep period in which to work.

The effect of this would be fewer students and therefore less noise in the MAC than in previous years. The students there would have to have their schedules checked on a computer system upon entry and inform the supervisor on duty whether they plan to study or simply hang out. Fewer students would mean less required supervision, which would be covered by a campus supervisor or administrator.

Another aspect of this trial period would include more trash cans being located around the MAC, particularly near areas where students tend to convene. If it’s more convenient for students to throw away their trash, the amount of litter left behind in the MAC will most likely drop and will not be a nuisance for custodians.

If students are made aware, perhaps by a sign on each table, that the trash they leave behind means extra work for another real person, we would all take more initiative in cleaning up after ourselves.

This would provide justice for the custodial department which cleans the MAC and has dealt with the staggering amounts of trash left behind by students over the years.

It is completely valid that the misuse of a resource like the MAC should warrant changes and/or punishments, but with the graduation of last year’s seniors, the Paly student body should be given another chance to earn their access to the MAC back. If disruptive behavior and littering continue during this trial period, it would be more than fair to shut down the MAC again.

However, if the administration does not allow the current students a chance to prove that they can behave maturely in the MAC to reap all the benefits it offers, they would be denying students opportunities to learn, study or take a mental break, as well as effectively negating the entire purpose of the MAC being built on campus.