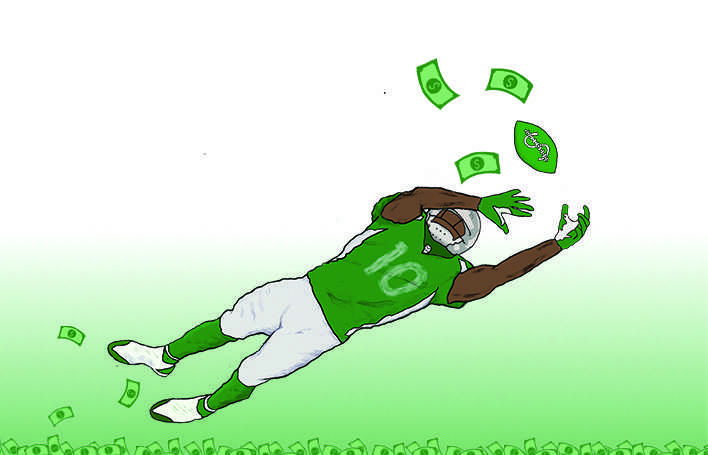 This year alone, dozens of Paly athletes have committed to play for Division I colleges such as Fresno State, Stanford University and UCLA. They will not only represent their school at every game, but also the brand the school has made a deal with.

An unmissable Nike swoosh is stitched in the corner of the jersey of every player on the University of Michigan football team. The Under Armour logo is plastered on the shoes of all UCLA basketball players. These Division I colleges rake in tens of millions of dollars per year from athletic company brand deals — yet their athletes receive no share of the profit. However, in 2023, that will change for collegiate athletes in California.

Gov. Gavin Newsom signed the “Fair Pay to Play” act on Sept. 30, which will allow collegiate athletes at both private and public universities in California to hire agents and make money from brand endorsement deals. The bill takes effect in 2023 and received overwhelming bipartisan support — the vote in favor was unanimous in the state assembly and 31-5 in the state senate.

According to Newsom, the bill was passed in an effort to make big-money college sports more fair for the athletes themselves. Peter Snodgrass, a 2017 Paly graduate and long snapper for the Northwestern University football team, supports the bill’s sentiment.

“(Student athletes) are putting all their time into the sport, and they’re really not seeing any benefit — meanwhile, universities are making millions and millions of dollars,” Snodgrass said. “Our school has a $100 million (TV) deal just because of the football team, and not a single dime of that is going to the guys on the team.”

In 2014, several players on the Northwestern team worked with the National College Players Association to create a union for student athletes nationwide in the “All Players United movement” — and according to the NCPA’s website, one of their main goals was  to “eliminate restrictions on legitimate employment and players ability to directly benefit from commercial opportunities.”

Some other vocal supporters of the bill include Warriors players Draymond Green and Jordan Poole, and Duke University men’s basketball coach Mike Krzyzewski.

Professional basketball players Lebron James and Ed O’Bannon sat alongside the governor as he signed the bill, and have shown strong support for it. O’Bannon won a class-action lawsuit against the NCAA in 2014, in which the judge ruled the NCAA’s use of names, images and likenesses of college athletes without compensation violated antitrust law.

The NCAA has raised concerns about the logistics of the bill once it comes into effect in 2023, though. Just after the bill was signed, the organization released a statement that said the bill “is creating confusion for current and future student athletes, coaches, administrators and campuses, not just in California.”

While the bill was still being debated, the NCAA urged the governor to veto it, saying it would blur the lines between amateur and professional athletics. The bill also conflicts with NCAA bylaws, which state that college athletes cannot make money off appearances or be paid for athletic brand endorsements.

The organization also said that if a change in the policies regarding college athletes and endorsements is implemented, it ought to be reflected nationwide. According to the NCAA, implementing the bill exclusively in California would give California schools an unfair recruiting advantage.

Alexa Malone, the Associate Director of Football Recruiting Operations at Stanford University, and Scott Swegan, Stanford Director of Communications for football and golf both said they did not want to comment on the issue and referred a reporter from The Campanile to the university’s statement, which echoes part of the NCAA’s sentiment.

In this statement, Stanford University says it supports the goal of improving flexibility in the use of the names, images and likeness of student athletes, but that “true progress can only be achieved when it is undertaken at the national level, with appropriate safeguards against unintended consequences.”

According to Snodgrass, one consequence of the California bill, regardless of whether or not it is implemented nationally, could be potential improper use by recruiters.

“What stops a major donor from saying, ‘Hey, tell this recruit that if he comes here, I will give him $1 million to be the face of my car dealership?’” Snodgrass said. “Some of these (recruiters) and these donors will severely inflate their value just to get these kids to go to the schools.”

Lawmakers in states including Washington, Maryland, New York, Minnesota and South Carolina have already introduced or are moving to introduce similar policies as California’s, and the NCAA has said that it is looking into next steps.

“(The bill will) give a lot of (athletes) an opportunity to benefit from putting their lives on the line,” Snodgrass said. “And also to finally see some rewards and benefits from these 40 plus hours a week put in just for their sport.”