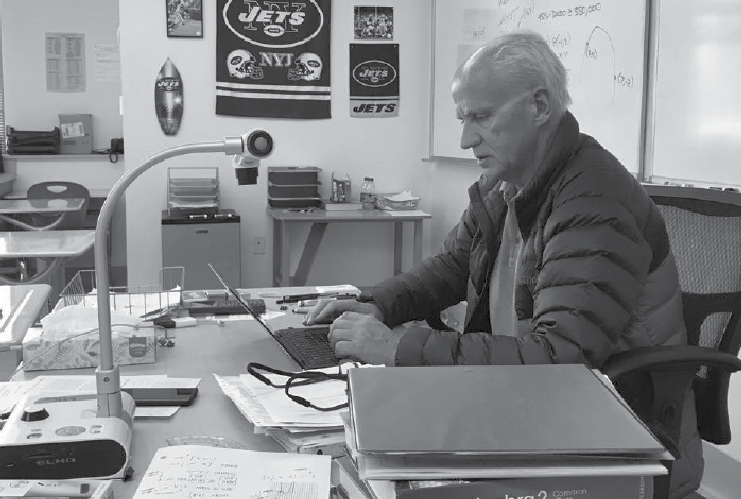 Staff members had diverse experiences prior to coming to Paly

Toma, Mishali and Bungarden. A math teacher, a science teacher and a history teacher. A political refugee, a traveler and a soldier. Each one of these teachers come from different backgrounds, with different reasons to teach, and different stories to tell.

<strong>From student to political refugee to working at Paly, math teacher Radu Toma has lived a life full of experiences, one  memorable and rich.

Toma’s story began at the University of Bucharest in Romania, where he earned a his degree in math. He taught  there for five years in a special math program, helping with Math Olympiad preparation before moving to the U.S.

Originally from Romania, Tomas’ parents and grandparents were also teachers. Toma attributes his teaching career not only to his parents,  but also to the profitable nature of the job.

“(Teaching) was well respected at the time in Romania,” Toma said. “The income was significantly higher than other incomes if you were teaching math because of the fact that there was a whole industry of private tutoring going on. Math came easy to me, and I liked it. I think I am a people person, so it was a relatively simple choice to make. And I never regretted it.”

After teaching for five years in Romania, Toma moved to the U.S. due to the ongoing political turmoil.

“At the beginning of the ‘90s, we had a revolution in the country,”  Toma said. “There were tanks in the streets. Our ex-president was executed after a two day trial. It wasn’t clear where the country was heading when the communists lost power and the neo-communists took over. So it was a very sketchy political environment. ”

Once reaching the U.S., Toma obtained his political asylum.

After that, he began teaching middle school math at a private school, ultimately transitioning to teach at Paly.

“Well, I feel very privileged to work with (this) group of kids,” Toma said. “They care and they’re smart and they are funny. I know they’re going to go somewhere in life, and I feel like I can make a difference in their education.”

<strong>As a college student, Michael Mishali biked around in the Long Island snow to tutor kids in chemistry.

Known then as the kid with the bike lights, Mishali now teaches to kids at Paly.

“I wanted to become a teacher since I was in high school,” Mishali said. “I had (a) bunch of teachers who inspired me; I had Ms. Bert and Ms. True. They were my two major influences.”

Mishali describes his teachers as people who went above and beyond to improve his education.

“Ms. Burt and Ms. True, and the other teachers that left me with positive memories, were the ones who saw me as more than just a student,” Mishali said. “They were approachable, kind and reliable. They seemed genuinely interested in my present and my future. That, and we would talk about the TV show Lost together.”

However, Mishali said he ended up going into college thinking he wanted to be a doctor due to parental pressure.

“I was misled for a time, and I thought I wanted to be a doctor … I applied to medical school, I took my MCATs and everything,” Mishali said. “And then after I’d applied, I rescinded my applications because I realized that’s just really not what I wanted to do. I went forward with becoming a teacher, and I have not regretted the decision since.”

After acquiring his teaching credentials at UC Berkeley, Mishali went on to teach 8th grade science at Greene Middle School for four years before deciding to take a two year hiatus.

“After working at (Greene) for a couple years, I kind of began to feel like there was a lot that I hadn’t done when I was young,” Mishali said. “And now I had some savings. And I thought I can go see things and do things, so finally after my fourth year, I decided it would just be time and I would travel. It was nice to have a different type of stress. My stresses were sometimes where I’m going to sleep and what I’m going to eat, stresses I don’t have here. It’s good to have different challenges.”

Mishali ended up abroad in Spain and Israel, where he spent most of his trip.

“In Spain, I worked at an English immersion camp in Basque country,” Mishali said. “I lived with Spaniards, made friends, practiced my Spanish and walked across the country on the Camino. In Israel, I lived in Tel Aviv and Jerusalem, practiced my Hebrew, tutored English a little bit, worked on a peach farm and hiked in the desert.”

After Mishali’s trip abroad, he ended up teaching at Paly. Mishali said he hopes to build lasting connections with his students and see them grow — something he did not have the opportunity to do before.

“I’ve seen my old students around campus and seen how they’ve grown and changed since middle school,” Mishali said. “I’m just excited to be on campus with my old students but also with new students and see them grow over the course of their high school. It’s one of the things you lose teaching eighth grade — I teach the kids for a year, and they’re gone.”

<strong>Before coming to Paly, history teacher Jack Bungarden served in the Army, worked at a small electronic startup, worked in financial services, as a manager of a local branch of a small environmental services company and taught at Mission San Jose High School.

“I was an artillery guy (in the army),” Bungarden said. “So I served. I had a stint in missiles in Germany. I was in an artillery unit in Korea. When I wasn’t in either of those places, I was a student at the Artillery School in Oklahoma.”

Commissioned to the Reserve Officer Training Corps in 1978, Bungarden went on to serve for six years before leaving active duty in 1984.

After leaving active duty in 1984, he went on to join an electronic home automation startup created by a friend of his.

“The (company’s) technology wasn’t really great, and user interface was close to what was state-of-the-art, but state-of-the-art for a small company is not the same for a big company,” Bungarden said. “Home automation is a huge industry now. So we were maybe a bit before our time. But it lasted for a while, went through a couple rounds of funding, and it certainly was an interesting experience.”

After six to seven years at the startup, Bungarden moved on to work in financial services, then as a manager at an environmental services company before getting his teaching credentials at San Jose State University.

Looking back, Bungarden said that given a second chance, he would have taken the same exact route.

“Each of the experiences I have had in the past were interesting at the moment, made sense at the moment and to some extent they helped with the things that happened after,” Bungarden said. “Most of those experiences in some way directly or indirectly helped me be a better teacher.”