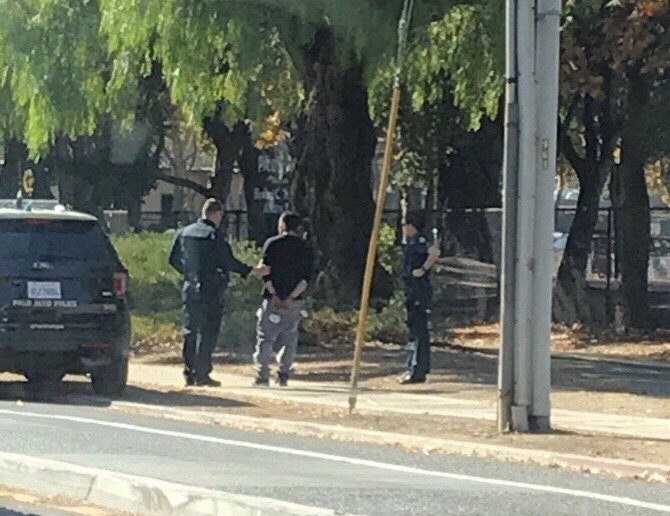 Armed Palo Alto police officers chased suspected robber David Esqueda Jr. across Paly campus shortly after noon on Monday. He was subsequently arrested on the bike path behind the school and taken into custody, according to the Palo Alto Police Twitter.

According to a press release by the Palo Alto Police Department, the police received a dispatch call reporting that Bank of America on Quarry Road was robbed just before 12 p.m.

The suspect, who was wearing a face mask at the time, handed the teller a note demanding money, according to the press release. The teller complied with his demand, and the suspect then fled on a bicycle.

Palo Alto police responded to the call and found the suspect, later identified as Esqueda, on Paly campus. A police officer was injured while pursuing Esqueda, and was treated by paramedics outside the 800s building before being taken to the hospital, according to an officer at the scene.

Due to panic incited during the chase, many students ran into nearby classrooms, and some staff members began lockdown proceedings, although no instructions were given by administration. Assistant Principal Jerry Berkson and Palo Alto police later confirmed that there was no official lockdown.

During the pursuit, the alleged robber, who was not recognized as the suspect, entered the library, approached the librarian and asked where the restroom was, according to a source who agreed to be interviewed on the condition of anonymity.

An anonymous student said she called the police during the pursuit when she saw the alleged robber inside the library.

“As I was walking past the library, I saw him (inside),” she said. “He was an adult and he had a stack of cash in his hand. I wasn’t sure what to do, but eventually I figured out that I should call the cops. There was 30 seconds (on the phone) and then the cops were there, yelling and asking people which bathroom he was in.”

The anonymous student said she saw the suspect run from the hallway in the library into the boys’ bathroom attached to it. She had previously seen the suspect run between the Haymarket Theatre and 100s building and was asked by a police officer about his whereabouts.

“I had seen someone running through (campus) and I just thought it was a bizarre place, to run to a school campus during the day,” the anonymous student said. “I didn’t think much of it until the cops asked where he went.”

According to the student, the suspect was dressed in sweatpants and a dark shirt, and looked to be in his 20s.

“I don’t really know what his face looked like,” she said. “He had dark hair and a beard and he wasn’t wearing a baseball cap at first, but he was when I saw him in the library.”

According to Paly administration and the Palo Alto Police Department, a press release with more details will be published soon. More information will be added as it becomes available.