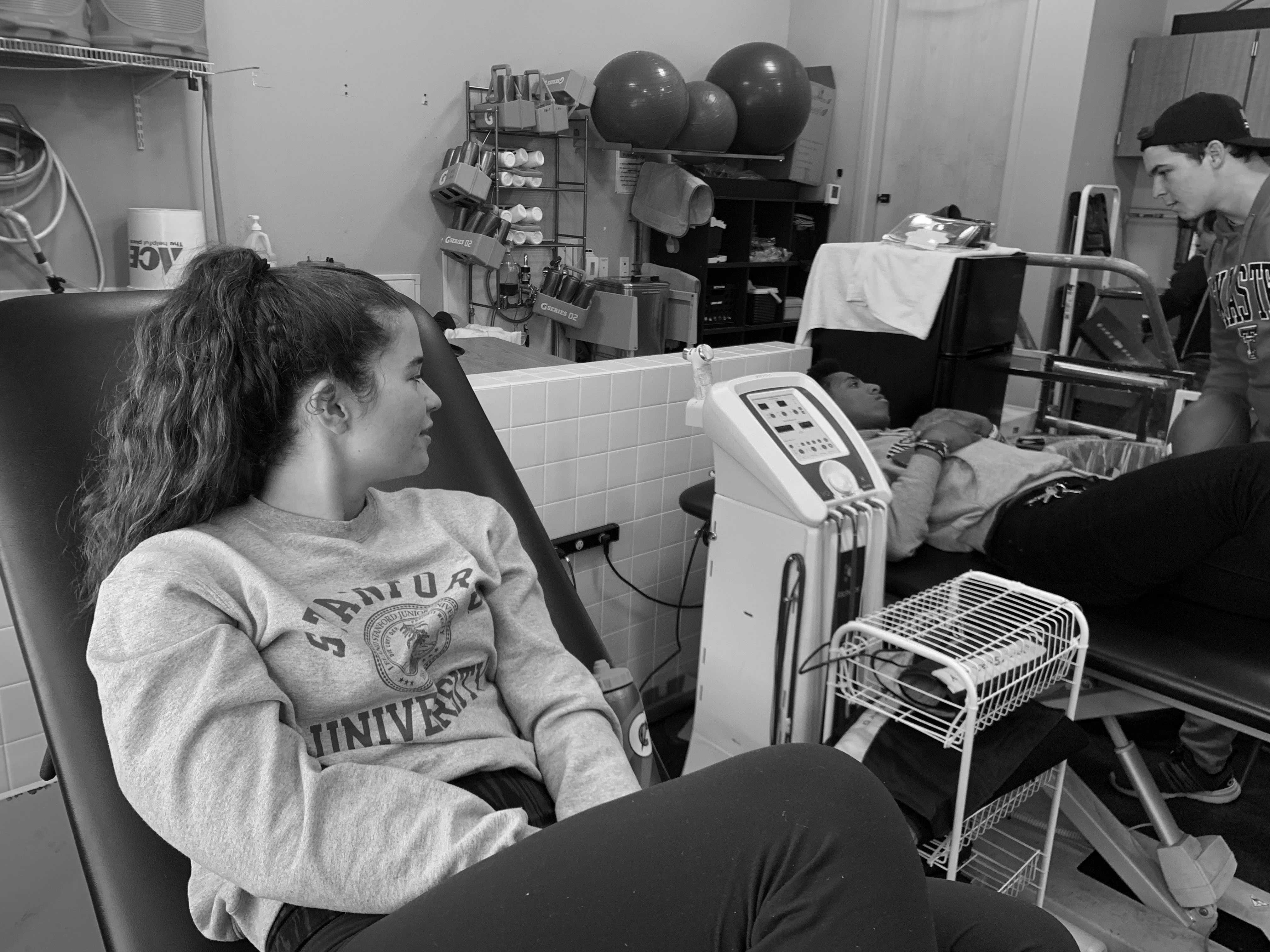 Twice a week, during season as well as off-season, senior Grace Thayer makes her way to the Peery Center for a regular cupping appointment.

Cupping has become a popular method for reducing muscle tension and removing knots in the body for athletes playing competitive high school sports, but is more effective when paired with other muscle treatments. It involves a suction on the skin where the negative pressure loosens muscles and allows for more blood flow.

According to Pacific College of Oriental Medicine and Paly athletic trainers, cupping sedates the nervous system and relieves back and neck pains, stiff muscles, anxiety, fatigue, migraines, rheumatism and cellulite.

Athletic trainer Justine Iongi, who is known by students as Mrs. E, said she utilizes the cupping mechanism on two to three students per day.

“Cupping is considered an instrument-assisted soft tissue mobilization technique for myofascial release,” Iongi said. “In a perfect world, the fascia that surrounds your muscles moves independently from muscles. But, adhesions happen when the muscle and fascia collide and get stuck, and that’s when you feel tightness or restriction in your movement.”

Cupping lifts the fasia from the muscle and helps return the athlete’s full range of motion in that part of their body, according to Iongi. However, she uses the cupping treatment as her last resort because other methods are easier and less painful.

Thayer said she combines cupping with other muscle rehabilitation techniques, including electrostimulation therapy, scraping and cryotherapy.

“I get cupped on my shoulders, back, calves and my upper legs once a week,” Thayer said. “I’ll do legs at the same time and then back and shoulders together the next day.”

Thayer has experienced two different types of cupping based on the preference of the two athletic trainers, and she said both are beneficial in different ways.

Thayer has had several severe injuries in her athletic career. Before freshman year, she fractured her spine while playing beach volleyball. Both times, cupping helped, she said.

“Once I stopped my rehab, I noticed that my back was constantly tight, so I started getting cupped regularly and that was the best I had felt in a year,” Thayer said.

According to Iongi, there is no particular sport that garners more cupping treatment than others, as it depends on how often the athlete is training and what they specifically do in their position, which directly affects the tension of their muscles.

“For example, water polo players swim a ton for conditioning, and they also throw a lot, so their upper shoulders and traps are tight,” Iongi said.

“I get it done every one or two weeks on my right shoulder and upper back,” Henry said. “It helps loosen my muscles and not have any muscle pain.”

Cupping has also been used by baseball players who train in the off-season and continuously utilize their arms in drills to strengthen their trapezius in preparation for the season, senior varsity baseball player Dean Casey said.

Casey said he uses cupping in unison with other treatments including electro stimulation, which utilizes pads that send shocks to muscles to activate them, and GameReady, a wrap that goes around a certain body part that fills with ice water.

“I get it all across my back and down the shoulder and arm of my throwing side,” Casey said. “I don’t necessarily prefer it over other methods because it would work in unison with other treatments (such as) general stretching out on a table with the trainer, electro stimulation and GameReady.”

Some students continuously use the technique and suffer more pain if they stop receiving treatment.

“I can’t walk sometimes because my muscles hurt so much, but then I get cupped and (the pain) goes away,” Thayer said.

Although some are skeptical about the effectiveness of cupping alone, it has become a valuable technique in muscle treatment for student athletes when paired with other methods.