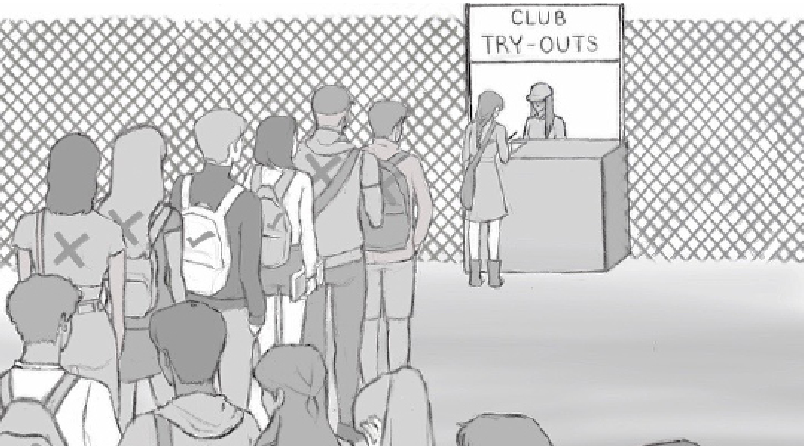 For about three years before high school and even after, the most common advice I have heard on how to make friends or simply be happier in high school is to join as many clubs and teams as possible. Joining interesting groups introduces you to interesting people, supposedly.

But oftentimes, joining these groups can be harder than it seems.

To become a part of many of the academic teams at Paly, including Science Olympiad and Paly Robotics, students have to compete with their peers through an exam or a try-out period.

This can discourage some students who are genuinely interested in learning more about the subject because they may be worried that they will not be able to make it onto the team. Teams offered at schools should be used as a learning opportunity so that even if the student cannot initially pass the test or try-outs, they will be able to improve their experience and enjoy doing it.

If a student’s initial knowledge is not up to par with the standards of the team to be competitive in regards to other student members, they are unable to join and cannot reach their fullest potential in terms of their knowledge and experience. Because of this, academic opportunities at schools ought to be more inclusive to allow a broader range of people to join.

This is just one of the things that contributes to Paly’s culture of prioritizing competition and intelligence over interest and a genuine passion for learning. This culture leads to the mindset of “not being good enough,” which can be detrimental on the students’ mental health, especially at this age where we are just beginning to discover our potential and passions.

Students should be allowed to join any academic team that captivates them so that they learn that they are able to try new things that they are really interested in, rather than being discouraged to join new groups because they feel they are not good enough.

Though I understand a major reason for the current try-out or test entrance is to enhance the group’s competitive edge, there are many ways to keep the competitive spirit alive while still including all interested students.

One option for a solution could be to have a no-cut or amateur version of all academic teams on campus so that students  would be able to join a no-cut team if they are interested and potentially build their way up to the cut team if they wanted to.

This way, students could see if they really enjoy the activity and the no-cut teams would still be able to participate in and attend competitions against other amateur leagues.

This ensures that students who are genuinely interested in the subject can test out of teams and are encouraged to explore their interests. Not only that, but it helps to alleviate the stigma and pressure of trying out.

Though students could possibly join teams outside of school that promote inclusivity, those options tend to have a higher price tag, so many people may not be able to afford it.

Academic opportunities should be more inclusive, as high school is the time when students are able to explore and develop their interests. Their ability to join extracurriculars should reflect that.

The exclusivity of teams along with the negative attitude towards trying to do new things students are interested in but may not exceed in adds to the toxic culture at Paly.