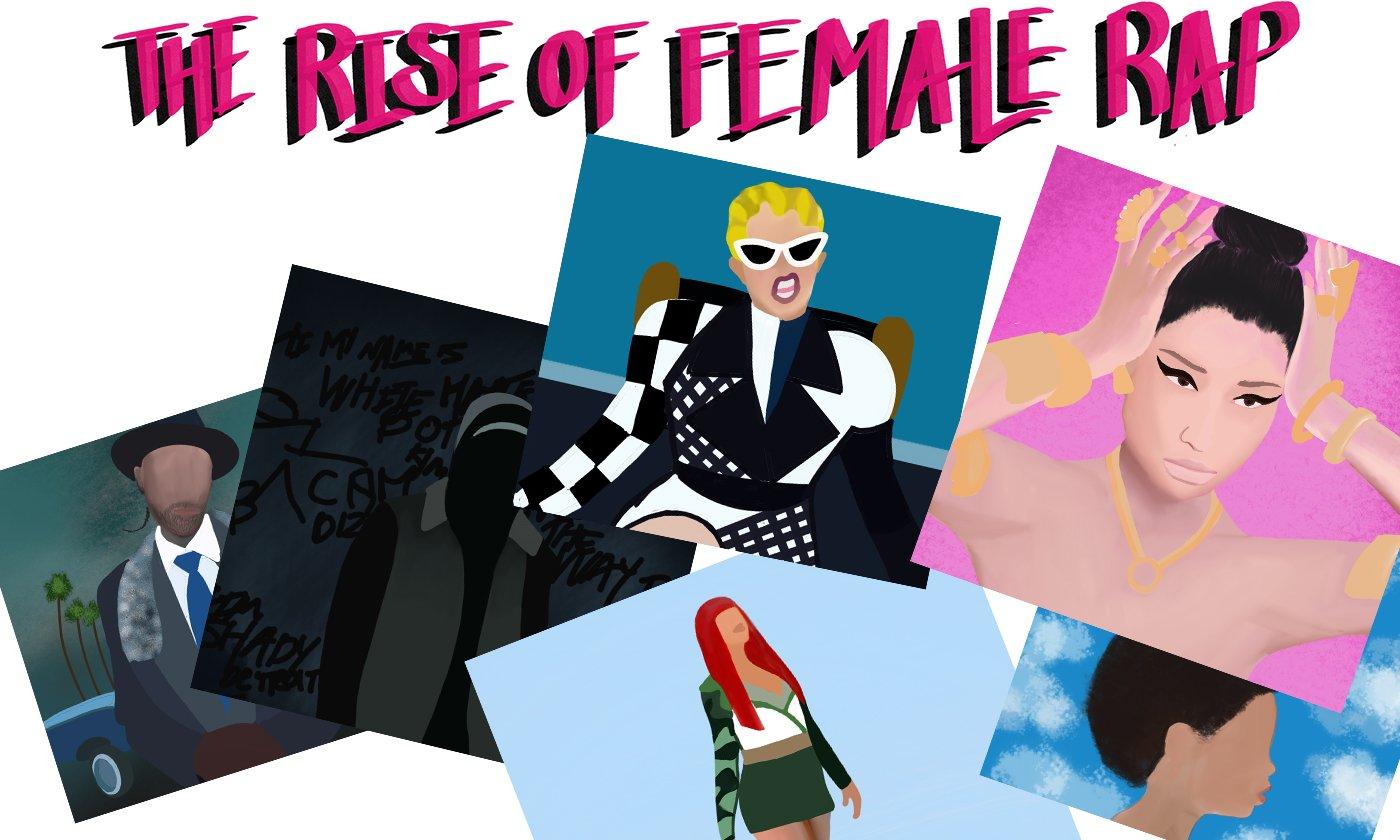 The Rise of Female Rap

Lately, however, a new group of people have entered the rap scene: women. Since the 1990s, female rappers have been gaining recognition, with  the first Grammy nomination for a female rap single being MC Lyte’s “Ruffneck” in 1993.

Despite this groundbreaking event, it was not until 2018 that a woman won a Grammy for Best Rap Album, when Cardi B won for “Invasion of Privacy.”

Furthermore, 2018 featured the highest ever number of female rappers on the list of top 100 hip hop albums.

Junior Laura Malagrino frequently listens to rap and said that Cardi B’s award can be attributed to the increased popularity of female rap.

“Female rap didn’t enter the mainstream until recently and a lot of these award shows are just a popularity contest,” Malagrino said.

According to Malagrino, the surging prevalence of female rap is influenced in part by the popularization of “ghetto” culture.

“I believe (female rap) is a mixture between feminism and the popularization and gentrification of ghetto or hood’ culture,” Malagrino said. “A lot of these female rappers are girls that grew up in poorer neighborhoods.”

Malagrino said Cardi B is one of the many examples of a rapper overcoming a tough past, speaking about how the famous rapper grew up in the Bronx and worked as a stripper.

“These situations have become romanticized and glorified, allowing for these girls to express themselves to the world.” Malagrino said.

“Having faced discrimination and sexism, that creates that new sound that you might not hear in normal popular rap,” Malagrino said.

Female rap is also gaining recognition because women, including Malagrino, can easily relate to it.

“With male rap, it’s a lot harder for me to identify with the artists because it’s a guy talking about gangs, drugs and sex from a male perspective,” Malagrino said.

“Female rap tends to be more about confidence and the hot-girl-summer ideals,” Malagrino said. “I actually would maybe consider it not confidence, but rather empowerment.”

Although male and female rappers sometimes act in similar, questionable ways, public perception towards their actions vary. While Cardi B came under fire for accusations of rape and burglary when she was a stripper, Snoop Dogg, who was once tried for murder, emerged unscathed and has had a successful career since then.

Malagrino said  that female and male rappers are frequently held to different standards, and that they are judged differently, even when they are rapping about similar topics.

“In reality, both girls and guys rap about similar stuff,” Malagrino said. “But because women have been told that it’s unattractive to be arrogant and cocky in the same manner that men are, it’s more noticeable when a woman does it.”

Similar to Malagrino, rap fan and junior Trisha Razdan finds that the themes in female rap generally differ from those in male rap.

“Male rappers often bring up (mention) women in their music and female rappers don’t,” Razdan  said. “One similarity I see sometimes is when listening to Cardi or Nicki, they both sometimes talk about men the way a lot of male rappers talk about women, but overall, female rap seems to have less talk about h–s and such.”

“I like the sound of it better and I find that female rap has a lot of interesting tones and beats that I haven’t heard before,” Malagrino said.

“Rap should communicate a message that’s deeper than money and lust, which is precisely why I prefer Rapsody’s music to other, more famous female rappers,” Singh said.

However,  Singh agrees with Malagrino that double standards exist in rap.

“Among casual listeners, double standards do exist,” Singh said. “Average people tend to listen to female rap through the subconscious lens that a female rapping is unconventional, while someone who seeks to objectively value a rapper by their musical and lyrical skill does not care what gender the rapper is.”

“It’s important for anyone to see themselves represented in an industry,” Razdan said. “Having prominent female rappers will allow younger girls to know that could be a career option if that’s something that they’re interested in.”

Despite the tremendous growth of female rap, it still has not reached an equal popularity level with male rap. Rolling Stone only featured seven albums by female rappers in their list of top 30 hip hop albums of 2018.

Furthermore, despite increasing social acceptance of female rap, double standards regarding lyrics lead to female rap being criticized for dealing with themes of similar gravitas as male rap.

But Malagrino doesn’t let the criticism of the lyrics bother her; in fact, she finds them to be one of the aspects that makes female rap so empowering.

Malagrino said, “Something about a woman telling you how much money she’s made and how much she doesn’t give a f–-k really just does something for me.”