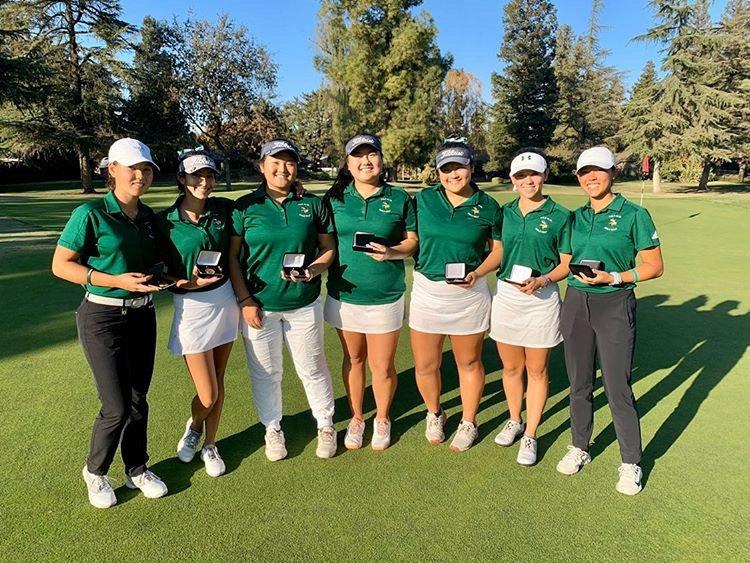 By a razor-thin margin, the girls golf team defended its Central Coast Sectionals title at the Laguna Seca Golf Ranch on Oct. 29, cementing back-to-back-to-back wins at CCS over the last three years.

The team is intent on maintaining its winning streak after going 8-0 in the regular season and sweeping the local league tournament three weeks ago at the Santa Teresa Golf Course, placing first by a comfortable 38 strokes.

With the CCS title under its belt, the players have set their sights on gold in the California State Tournament, which they qualified for on Monday.

Head coach Doyle Knight said he is proud of the skill and concentration his team exhibited during the CCS tournament. Even with additional CCS pressure, the team was able to bring a solid game.

“At the CCS tournament, Valley Christian was playing really well at the beginning, and we were only doing OK,” Knight said. “After the first nine Valley Christian started to lose steam and get higher scores, but we were able to stay consistent.”

Paly won the nail-biter over Valley Christian by seven strokes, 370-377.

“In the seven years that we’ve had a girls golf team, we’ve won four CCS championships, and we’ve had four individual champions including Sydney (Sung),” Knight said. “If you look at the history of the CCS girls tournaments, no other public school has been so successful.”

Sophomore and medalist Sung was the first Paly player to win the champion title in three years. Stephanie Yu last did it during the 2016 season.

“I was really calm the day we played CCS,” Sung said. “I just wanted to go out on the course to have fun and play my best. After my first shot, I knew I was going to play well, and I wanted to win CCS for the team. Winning the individual title was just an added bonus.”

Both team and individual placement came down to the wire.

“In the final stretch of the round (Coach Knight) told me that the team was struggling a bit,” Sung said. “This pushed me to make two birdies on my last two holes to go one under.”

Sung won the title with a score of 70, besting rival Valley Christian’s Varnika Achanta by a single stroke.

According to junior Marina Mata, the team is looking forward to the state tournament.

“Qualifying for the state tournament has been a goal of ours for this season and we are extremely excited to have accomplished it,” Mata said. “It is the first time the Paly girls golf team has qualified since 2013.”

The team placed third in its qualification matches and was automatically promoted to the state tournament. The top three teams from both the NorCal region and SoCal region are set to duke it out on Nov. 19 at the Poppy Hills Golf Course in Pebble Beach.