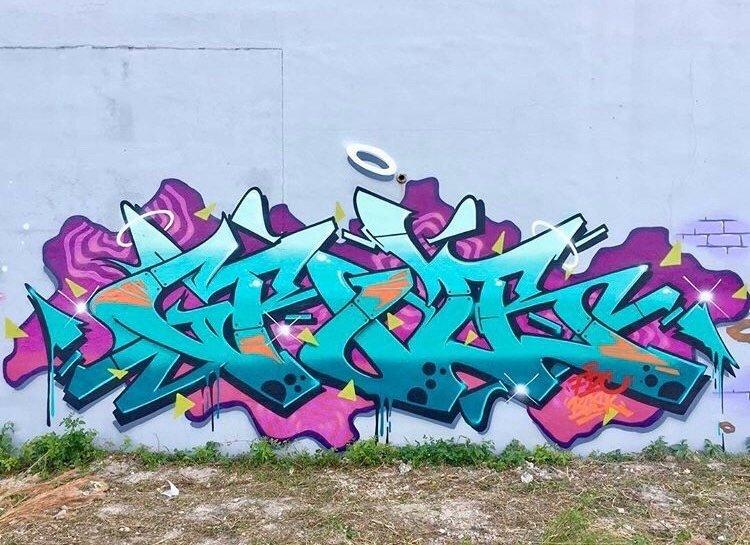 As he follows the sea of art masking the “Gunn Tunnels,” a former sewer system turned graffiti hub, a Paly senior, who agreed to be interviewed under the condition of anonymity, rattles his third can, lays out his new stencil and carefully sprays his initials on his illicitly tagged art.

Street art, including graffiti and tagging, became a popular art form during the 1980s, but has stirred up controversy as artists’ public statements and messages are often seen as vandalism and are usually painted over.

“When I do street art, I always ask myself whether or not I would count it as graffiti,” the senior said. “Whether or not I have been given permission, I will never paint in a highly visible area or on private property. Tastefulness is one of the most important responsibilities when it comes to street art, because people may appreciate a well-placed art piece, but certainly not vandalism.”

Tagging and graffiti, both unauthorized markings of public structures with writing or drawings, are just a fraction of the forms of street art created by the senior and his friends.

The senior started doing street art in ninth grade and said he was inspired by the unexpected placement of artwork rather than any specific artists.

“Whenever I see something I like, I take note of what is working well for that particular artist and try to incorporate it into my own practice,” he said.

A Paly junior, who asked to remain anonymous because she is engaging in illegal activity, also enjoys the thrill that comes with venturing into the Gunn tunnels and getting the chance to create her art on a vast public space.

“Spray painting is exciting, and it’s like you can create whatever you want and other people will see it, and I think that’s special,” she said. “Any wall to someone who graffitis is like a blank canvas.”

The junior said she has always been familiar with materials like spray paint and has been experimenting with them for years. What started as a few small projects became a newfound passion that expanded to graffiti art.

“I started messing around with spray paint when I was in seventh grade, starting with spray painting my bike multiple times,” she said. “I then started to go to tunnels and the creek to actually spray paint designs and symbols and stuff.”

Another Paly senior, who also wanted to stay anonymous, said graffiti art is harder than it looks and it took him a couple months to develop his skills. Once he practiced using spray cans frequently, he said he started to do big tags on walls and skate parks in the area.

However, not all street art is against the law. If an artist receives permission from the owner of a building or public space, then they can legally create street art there. This is the case for one of the most notable and extensive public art contributors in San Francisco: Sirron Norris.

Norris is best known for his murals “The Calumet” and the “Victorion: El Defensor de la Mission” located in Balmy Alley, home to one of the biggest collections of murals in San Francisco.

According to Norris, he started to make street art and create murals legally in 1999, and since then, he has built a business around it.

“All my work is commissioned,” Norris said. “I have had my own company for ten years. I have only done one free mural in my entire life. My work is called ‘cartoon literalism.’ It’s an art form I created for storytelling.”

For Norris, public art is a medium where he can share his message and opinions about various topics including politics.

“‘The Disruption’ on Bryant and 20th (is) very personal and political,” Norris said. “I raised funds to paint it. I never get that many opportunities to be political. No one pays for that.”

The Paly senior said street art often offers its creators many benefits. For him, tagging and graffiti are effective ways to relieve stress and are rewarding to view later on.

“Doing graffiti is sort of a way for me to pass time, and it’s a bit addictive in the way that it lets you meditate and see your tag somewhere months after you throw up your art,” he said.

For the senior, although the act is illegal, he said he tries to give himself a calm environment for him to create his pieces.

“Doing graffiti/street art should be as relaxing an experience as possible,” he said. “I usually try to paint in covered areas, so that I can focus on the art rather than not getting seen.”

The rush of producing art on public spaces contributes to the excitement of street art, according to the senior.

“I have placed some stencils and stickers in plain sight, which usually brings an adrenaline rush,” he said. “Mostly though, my street art is an outlet for creativity. I enjoy it because of the anonymity that comes with painting in public places.”

Street art, although illegal, has given many students an outlet for expression and a refreshing passion for art, the junior said. Legally created or not, these artists all use public surroundings to tell stories through their spray cans and creative visions.

She said, “Usually when I go to spray paint I try to create things that relate to me and who I am, and try to create a sense of individuality and leave a specific mark that represents me.”