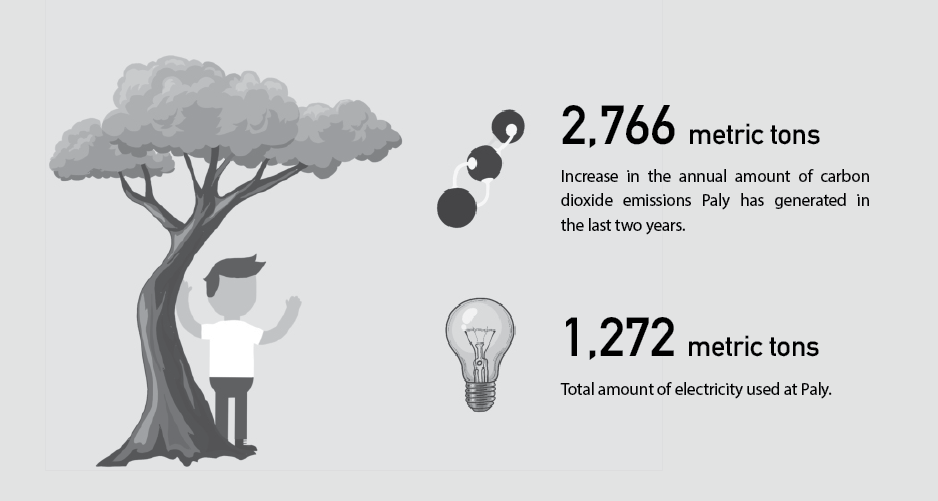 With the prominent fire danger and risk of destruction of many homes in Northern California, global warming is in effect.

In response to the increase in global temperature due to pollution from humans, many people are taking action in order to reduce practices that may negatively affect the environment.

A carbon footprint is an estimated calculation of the amount of carbon that an individual contributes.

A report released by Paly in 2015 showed that the total electricity used at school is 1,272 metric tons.

However, during the past two years, there has been an increase by 2,766 metric tons in the amount of carbon dioxide Paly has generated.

Most of Paly’s increase in carbon dioxide levels comes from the addition of new buildings, according to Paly Sustainability Program Manager Rebecca Navarro.

“The biggest contribution to Paly’s increased carbon footprint would be additional square footage, particularly the expansion of the gymnasium and the addition of the Media Arts Building and Performing Arts Center,” Navarro said. “Fortunately, the additional square footage is all built to CHPS (Collaboration for High Performance Schools), and the overall impact is significantly offset by the solar array and the LED conversions.”

Navarro said that changes to the use of lighting in classrooms has helped decrease the amount of carbon dioxide each school produces.

“In the past three years, Paly has had all exterior and interior lighting upgraded from a variety of different styles, most frequently (from) fluorescent tubes to LED lighting,” Navarro said. “Paly also has a new solar array in the football field parking lot, and the one in the PAUSD (Palo Alto Unified School District) courtyard also serves to offset Paly’s electricity consumption.”

With an increase in the amount of carbon dioxide levels in the atmosphere, Navarro said the direct impact on the Palo Alto community will be seen through drastic weather changes.

“The most relevant impact of climate change for many Paly students will be increases in extreme temperatures,” Navarro said. “Palo Alto will probably see longer, colder freezes during the winter months, and has already seen an increase in heat waves with higher maximum temperatures sustained for longer periods of time than is historically common for this region.”

Many Paly students are engaging in small changes in order to ensure a brighter future, one of them being junior Stella Essenmacher.

“A major way I reduce my carbon footprint is by going on three-week road trips because it teaches me to appreciate the outdoors while also consuming a lot less carbon than traveling abroad (in a plane) would,” Essenmacher said.

In addition to going on road trips, Essenmacher said her family uses an electric vehicle on a daily basis.

“Electric and hybrid cars have become a lot more popular,” Essenmacher said. “My family has a hybrid car, and we use it more than our (standard) gasoline-fueled car.”

According to Essenmacher, who is currently enrolled in AP Environmental Science, with the increase in carbon emissions into the atmosphere,  there is a potential for health problems.

Science teacher Nicole Loomis also said that students have many transportation options such as biking and carpooling, which will reduce the carbon dioxide levels in the atmosphere.

“As a school, we can turn off lights and unplug appliances when they aren’t in use,” Loomis said. “We’ve already installed solar panels in the parking lot, so that helps. The new buildings also have updated lighting systems that are more energy efficient.”

As a community, Loomis said that alternatives can be put in place in order to reduce risks of further global warming.