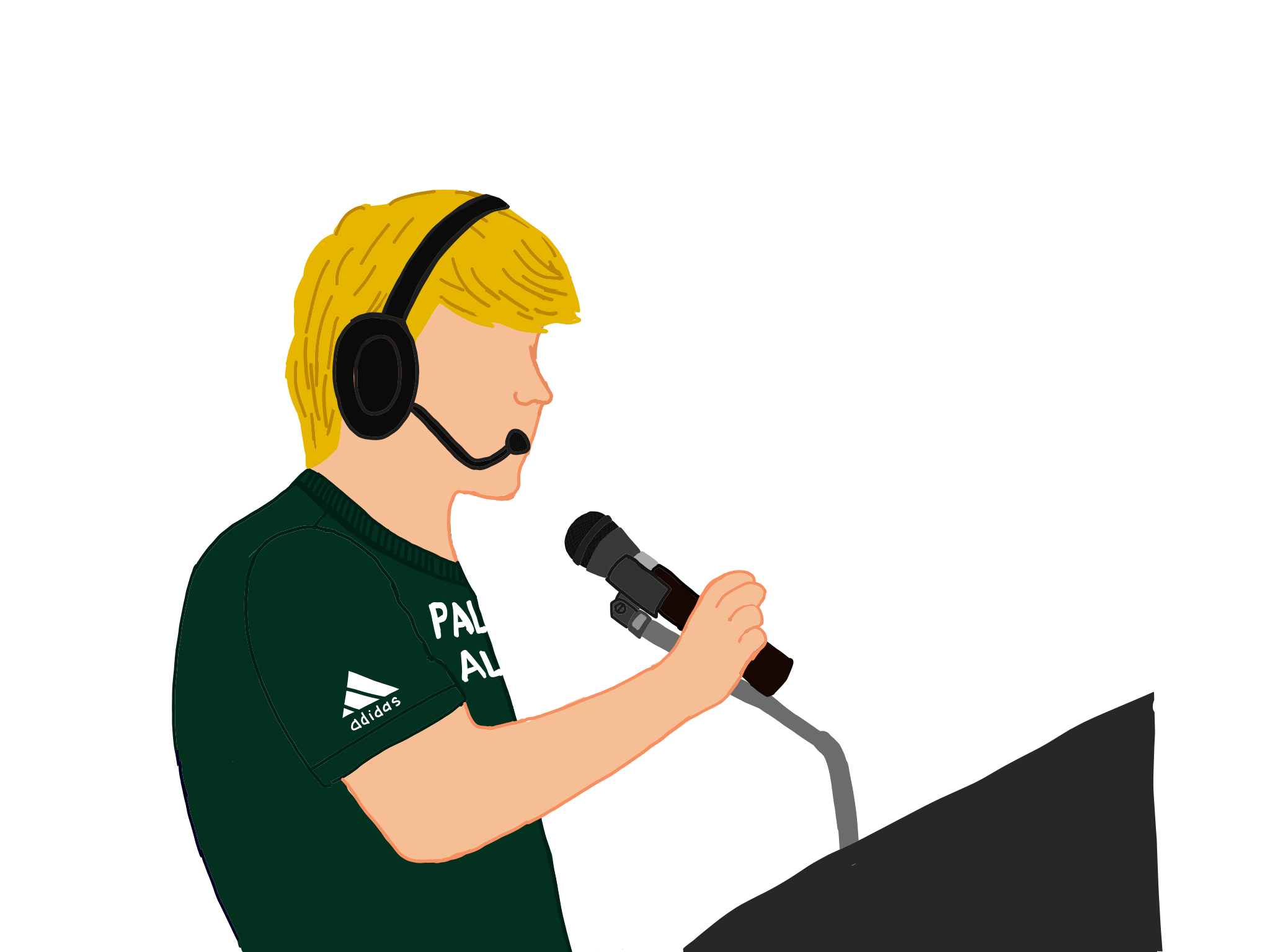 The Voice of Paly Sports

The “On Air” sign glows a threatening red, pixelated blue words cascade down the teleprompter, and three imposing black cameras point towards junior Jason Goldie’s face as he stands in front of a nylon green screen to recount the latest sports news.

Though Goldie has been a sports anchor on InFocus since his sophomore year, he has long been passionate about sports broadcasting and recently began doing commentary for Paly football, baseball and wrestling.

“With the help of some parents and coaches, he learned to keep score on a baseball scorecard (in elementary school), and later on iScore, which he loved,” his mother Karole Goldie said. “I also started taking him to Giants games, 49ers games and Stanford baseball and football games. That’s where he learned how to announce.”

Goldie said he hopes his passion will eventually lead to a career in sports broadcasting.

“I started doing broadcasting in eighth grade, and I found out that it was my hidden talent,” Goldie said. “As soon as I discovered this, I knew this was what I wanted to be.”

“Last year, (Gifford) was co-teaching my math class, and he wanted me to announce the varsity football games and, of course, I accepted,” Goldie said.

Arne Lim, a Paly math teacher, said he announced football games for about a year before Gifford introduced him to Goldie through Dias.

“I get this contact … from Tina Dias, saying that Jason Goldie would like to also announce games,” Lim said. “I explained what I do and how it operates and he seemed quite amenable to it.”

According to Lim, Goldie was quickly learned the ropes of commentating despite facing communication challenges due to autism.

“In a nutshell, we (people with autism) see the world differently,” Goldie said. “Our social skills aren’t that great. (Christina Dias) wanted the other academic communications students to come to the first JV game that I announced just so they could hear me.”

Lim said Goldie is especially adept at the preparation aspect of broadcasting because he memorizes things easily.

“He’s also very good at remembering names that he repeats over and over again,” Lim said. “For example, I would not be surprised if he actually knows everybody on the team right now by number and name.”

According to Paly Education Specialist Christina Dias, who manages Goldie’s individual education plan, he has improved both his confidence and communication skills as a result of his experience with sports broadcasting.

“He’ll reach out to the other teams and get the list of the names of the players … he’s going to be announcing,” Dias said. “He wants to make sure he pronounces their names correctly and knows how to say their names, so he puts a lot of time into prepping for it.”

In August, Goldie began announcing at other Paly athletic events, including baseball and wrestling, after a Paly parent approached him.

“I was at the Paly Christmas tree drive and there was a wrestling mom there,” Goldie said. “She said that the announcer for the wrestling events was an outgoing senior and she wanted me to take over.”

Despite never having played sports competitively, Goldie said he loves talking about them because sports are a major part of his family life.

“Football is the play-by-play, baseball you announce who’s at-bat and wrestling you announce who the next wrestlers are,” Goldie said. “It’s a great career for a sports fan like me.”

“I really enjoy listening to the announcer at the football games,” Jones said. “His voice is very soothing.”

According to Dias, Goldie’s participation in sports broadcasting is part of a pattern of increased inclusion for students with disabilities.

Dias said, “The District is really embracing the idea of inclusion, (which) means that they’re given the same opportunities as your typical peers.”