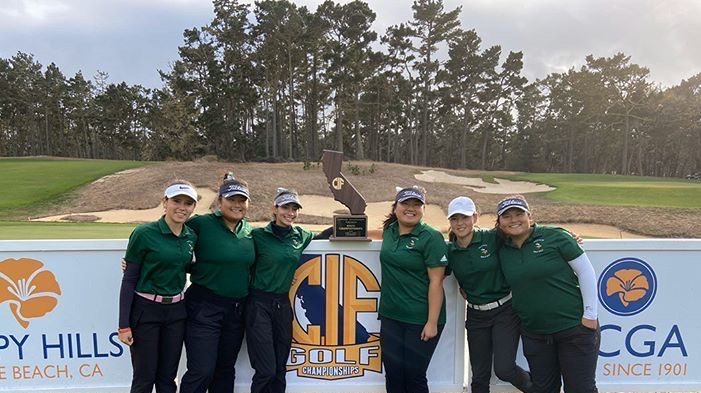 After a transformative season, Paly Girls Golf added the California Interscholastic Federation state title to its trophy shelf following a thrilling eight stroke win over Southern California rival Troy High School. Winning the coveted championship title marks a first for the northern California region as a whole—the tournament had previously been dominated by southern Californian teams since its creation fifteen years ago.

Sweeping comfortably through all ten regular season matches, the team went on to win the local league tournament on Oct. 22 by 38 points. The heat only kicked up when they defended their CCS title on Oct. 29 by a razor-thin margin of seven strokes, where sophomore Sydney Sung clutched the individual player title over her Valley Christian counterpart by a single stroke.

“After my first shot, I knew I was going to play well,” Sung said. “I wanted to win CCS for the team. Winning the individual title was just an added bonus.”

The team held on to third place in the CIF state qualifier tournament to proceed to the next round. This year is the first time the team has qualified since 2013. With CIF state tournament veterans waiting for them at Poppy Hills Golf Course in Pebble Beach, Paly’s girls golf team was the undisputed underdog going into the finals tournament on Nov. 19, according to Head Coach Doyle Knight.

However, the team did not allow their underdog status to interfere with their mentality. From the start of the fall season, Knight said the players had their minds set on the gold.

In preparation for the showdown, the team’s primary focus was practicing key techniques and learning the greens that the tournament was set to be played on.

“We figured it (the championship) was going to come down to chipping and putting,” Knight said. “I wanted to make sure (the girls) had these fine-tuned.”

The familiarity of the course is vital to a golfer’s performance, according to senior captain Katherine Sung, especially at the States level.

“I had played at Poppy Hills in other tournaments before, so I knew the course pretty well,” Katherine said. “The team also went down on Veterans Day to do another practice round, which really helped us gain confidence on the course.”

Forgoing their time off from school, the team traveled to Pebble Beach to play on the course in advance.

“We went down for a practice round as a team on Veterans day,” Knight said. “They had played the course quite a bit already, but it’s always nice just to see it one more time. (Players) Bridget and Marina went down an extra time the weekend before, by themselves, just to get more familiar with it.”

According to Katherine, perhaps the most impressive aspect of the win was the team’s ability to persevere and play around their mistakes.

“One of my worst moments during the match was when I missed a two foot putt for par,” Katherine said. “Putting on this course was extremely tough with the firm and fast greens, so it was really frustrating to (take three putts), especially from a short distance.”

Even so, Katherine came back with resolve on the 18th and final hole. After escaping the back bunker (sand pit), she sank a 30 foot putt to go two strokes over for the entire match, placing sixth individually.

“As the putt fell, my entire team stood up and started cheering for me, along with other players and parents that were watching,” Katherine said. “It was a surreal experience to end my last high school event ever.”

When asked about what makes this year’s team so special, Knight attested to the flexibility of his roster.

“We were deeper, meaning that my girls, from one through seven, could all intermingle,” Knight said, explaining that this gave him the ability to play any combination of six girls from his seven player talent pool, all without losing many strokes. “Whereas with other teams, (players) five and six (are inconsistent), kind of back-and-forth, because maybe one is having a bad day.” According to the players, the team was not aware that its prospect looked as good as it did during the tournament: perhaps coach Knight employed an alternative tactic. Sydney says she was under pressure the entire match.

“Coach Knight actually made me believe that we were in last place on the 13th hole, so I made a few birdies to try and help the team,” Sydney said. “But it turns out we were leading throughout the day.”

Katherine was not sure of the team’s placement until the final tally.

“I had no idea that we were going to win,” Katherine said. “I teed off last so I didn’t know the scores until the very end. After I sunk my last putt, a (group member) told me ‘I think you guys won,’ and I responded, laughing because I thought she was joking, with ‘no way.’”

After Katherine spoiled the unbelievable news of victory,  junior Marina Mata said the team was elated and even shed a few tears of joy.

“It was a unique moment and I would never change it for anything in my life,” Mata said. “It took a while before (winning the tournament) hit me, but when it did, I was so happy because I realized that our team was the best in California.”

According to senior Priya Bakshi, the most exhilarating part of winning was getting to tell her teammates of their success as they returned from the 18th hole.

“We were the underdogs going into the tournament,” Bakshi said. “So that made winning feel so much better. Making history at States was the best way to finish out my high school golf career. Winning with the team at our last tournament together is a feeling I know I’m never going to forget.”

For many players, specifically the seniors on the team, the big win was bittersweet.

“The worst part was realizing that this was our last high school tournament together ever,” Bakshi said. “Katherine and I started on the team together four years ago. We are so lucky to be part of such an amazing program. I’m really going to miss the team energy and playing with all the girls who I’ve gotten to know so well over the last four years.”

This sentiment is shared by the rest of the team, according to Mata.

“I am beyond grateful for what we have accomplished,” Mata said. “I truly believe that we got to where we are because of our close relationships and friendships. It was an amazing season, and I’m sorry to see it come to an end.”