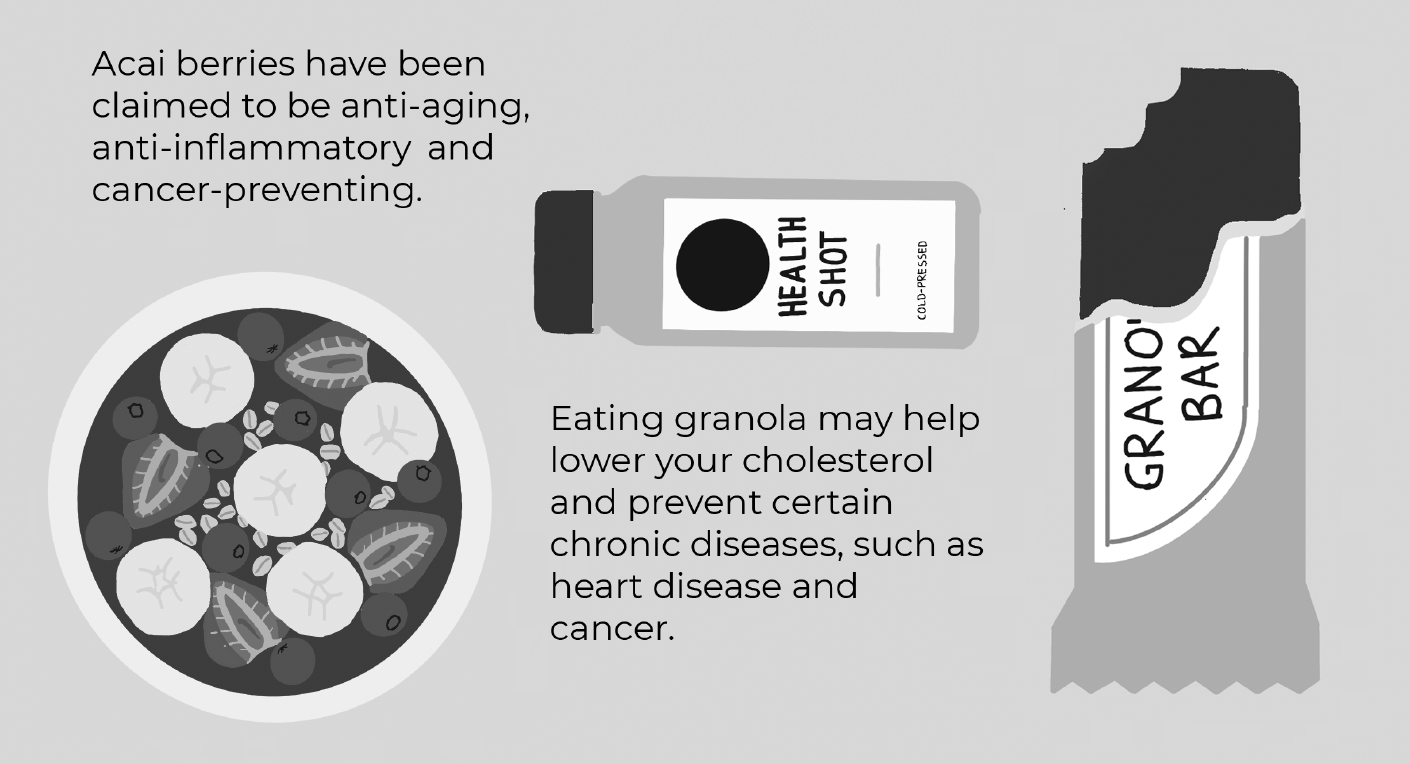 Almost every morning, junior Loren Olsen wakes up and downs a cup of water and apple cider vinegar. According to Olsen, integrating apple cider into her morning routine is an attempt to cleanse her system and be healthier. However, it appears that practices like Olsen’s may not actually be as beneficial as influencers and health fanatics make them out to be.

With food trends that cater to active lifestyles and convenience, it can be hard to distinguish fact from fad. So whether you are looking to improve your diet or impress your Instagram followers, take a look below for a critical take on some of today’s trendiest foods.

In a generation that values instant gratification and trendy, healthy choices, the popularity of detox drinks is on the rise. Among these drinks, apple cider vinegar stands out as one of the top choices, according to Healthline Media, a website dedicated to health and wellness. Healthline Media says drinking a small amount of plain apple cider vinegar daily has many health benefits. Proponents say it can improve digestion, lower cholesterol and blood sugar levels, cure skin infections and aid in weight loss.

In a recent effort to improve her personal wellness, Olsen tried drinking two tablespoons of apple cider vinegar with an added cup of water every day for approximately one month. However, her experiment only lasted a month. Olsen said she was not seeing any results from this process and said the plain vinegar tasted “awful.” However, she said many food and drink manufacturers have mixed apple vinegar with other ingredients such as honey, cinnamon and berries to improve the taste.

A company called Blueprint, for example, sells an apple cider vinegar drink mixed with flavors such as turmeric, blueberry hibiscus and ginger maple. Proponents say it improves health, but apple cider vinegar is not an instant cure-all, according to nutritionist Cameron Straw.

For example, if the consumer’s goal is to lose weight, Straw said they must take into consideration that while the vinegar will help break down carbs in the body, there are several other factors that impact weight-loss including diet, lifestyle and exercise. It is important to consider all three when attempting to lose weight.

Found locally at Trader Joes, Whole Foods or Pressed Juicery, wellness shots come in a variety of colors and flavors, like turmeric, ginger and apple. They are meant to provide concentrated quantities of essential minerals, vitamins, antioxidants and other nutrients that manufacturers claim instantly boost health, as opposed to traditional supplements taken in pill form.

Straw is not convinced. Despite all the claimed positive effects of wellness shots, Straw said the beverages could actually cause harm.

“There are random vitamins in (wellness shots) which could potentially throw your body out of whack, and it’s hard to know which supplement company to pick,” Straw said. She also said these shots tend to have a lot of sugar, which, although healthy if consumed in moderation, is harmful in excess.

Turns out, bacteria isn’t only good for science experiments. Made up of a combination of yeast and bacteria, kombucha, a fermented tea, has some health benefits, according to Straw. Benefits include the probiotics that come from the combination of yeast and bacteria. However, the long-term effects of regular kombucha consumption are still unknown.

“Probiotics in general are not well understood and researched enough to make any claims,” Straw said.

Once a granola bar, a handful of nuts or a bag of trail-mix were considered the go-to snacks for health nuts, pun intended. However, trail-mix is no longer cutting it in today’s competitive of healthy snacking culture. Quinoa has made its way into breakfast, lunch, and dinner options — and now into snacks as well. It appears in a variety of forms including breakfast bowls, mac and cheese and chocolate-covered.

Moringa, or drumstick tree, has long been used in Asia and Africa for its alleged health benefits. Supporters say benefits include reduced chronic inflammation. Straw is not quite sure, though.

“I have heard of moringa, but most of its uses are not well researched,” Straw said. “Like many trendy supplements, I don’t think it’s the best idea. Herbs do have amazing benefits, but the way in which you consume them is important and (it is best) to work with a professional.”

Unlike smoothies, the consistency of smoothie bowls is more solid, making them more filling.
Junior Rachel Lysaght works at SunLife, a juice shop and smoothie bar, and describes the bowls as healthy blends of fruits and other supplements, with a resulting base that is almost ice cream-like. The base is poured into a bowl and topped with whole fruits, nuts, seeds or grains. The ever-popular acai bowl is composed of açai, banana, strawberries, blueberries, apple juice and almond milk.

“It’s a healthy alternative to sweets, but you should also include a balanced meal and other healthy items in your diet,” Lysaght said.

Straw takes a stronger stance against smoothie bowls. She said while they may be vitamin-rich, they are not healthy for the average consumer for several reasons. She said these bowls tend to have a lot of sugar, and while they do contain an antioxidant called glutathione, the same effect can be obtained by simply working out or going to the sauna.