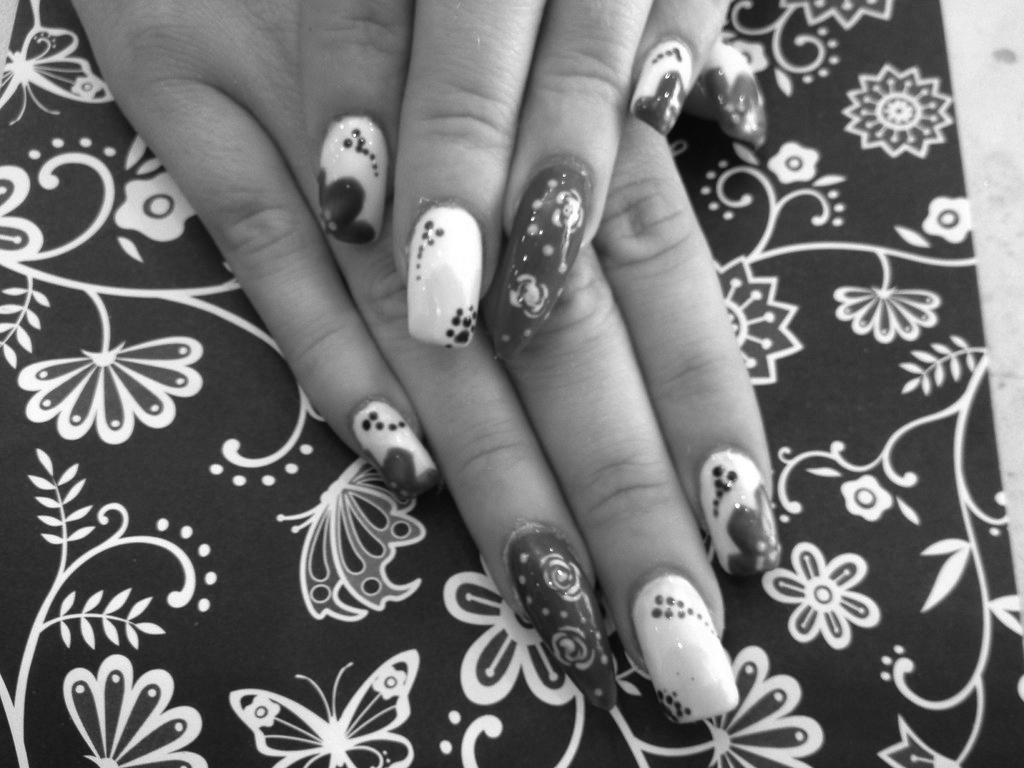 As junior Laura Malagrino walks into the salon, her mind is flooded with countless ideas for her next set of acrylic nails. Between various shapes such as coffin or oval, and numerous designs ranging from french tips to solid colors, the possibilities are endless, allowing her to get creative and explore new options.

“It’s a really interesting and different form of creativity,” Malagrino said. “You can do your makeup, but you have to do that yourself and it takes time every morning. But if you go get your nails done, you can get whatever you want, because the (nail technician) does it.”

Although there are a multitude of reasons behind getting acrylics,  which are fake nails applied over real fingernails, Malagrino likes them because of the way they spice up her style and appearance.

“I definitely like the look,” Malagrino said. “I use hand gestures a lot, so I like having long nails since they accentuate them so much. When you pick something up and you have long nails (you look) really dainty. I just think if you have that feeling, everything you say is important and it means something because your nails are long.”

Similar to Malagrino, junior Isabella Koutsayanis, who was inspired by her cousin to wear acrylics, enjoys the look of the nails.

“My cousin is really big on acrylic nails and I always saw them on her and I thought they looked very pretty on her,” Koutsayanis said. “Also, I have the tiniest hands and the smallest nail beds too, so (acrylics) just make my fingers look prettier. I think for that aspect, I really like the way it makes my like hands look.”

On the other hand, junior Audrey Kernick initially got acrylics to prevent bad habits.

“I got nails to help with biting my nails and pulling hangnails,” Kernick said. “I keep them long and pointy because I can’t pick at hangnails that way.”

However, Kernick now appreciates acrylics for the aesthetic, having since found a specific style preference over time.

“The shape I get is always (similar to) almond, but pointier, and I’m a total sucker for bright red and anything sparkly and sheer,” Kernick said. “I did a sparkly lime green that had a jelly polish look a couple of times because I was so in love with it.”

Through the countless shapes and designs available for acrylics, Malagrino has found a different preference towards her nail style than Kernick.

“I have a whole folder on Instagram of designs that I like, but those are usually way more expensive,” Malagrino said. “I usually just get solid colors or different colors for each nail. The nail shape I tend to get is coffin because it works better with the shape of my hand and I just personally like it more.”

According to Malagrino, when getting acrylics, the client can get a new set of nails put on, or they can get their previous, grown-out set filled, allowing them to change the color and design as well. Getting a new set is more expensive than getting older sets filled.

“It depends where you go, but (a new set) can be anywhere from 40 to 100 (dollars),” Malagrino said. “It also depends if you get designs and how long you get them, because they cost more for longer nails. Then, I think fill is like 15 or 20 (dollars) or sometimes even 30 (dollars).”

For Malagrino, the high price of getting her nails done is a notable downside.

“I’ve thought about doing them on my own because it would definitely be less expensive,” Malagrino said. “It definitely drains my bank account.”

In addition, another negative is that acrylics can be damaging for one’s natural nails underneath as acrylics are bonded to strongly to the real nails.

“You can refill (a set) as many times as you want, but they recommend that you take them off at some point because it’s really damaging to your nails to (leave them on),” Malagrino said.

Koutsayanis finds this to be an issue as well, and sometimes experiences pain due to the damaging property of acrylics.

“I do think that acrylic nails are damaging for my nails because they take an electric file to file your nails down and it makes it really rough,” Koutsayanis said. “Also, the day after I get acrylics, if I haven’t gotten them in a long time, my nail beds will start to hurt a lot.”

Kernick has approached this obstacle with a cautious attitude, being sure to take care of her nails in order to avoid damage.

“As for damage, I’ve always been super careful with them and have never taken them off myself or ripped them off,” Kernick said. “(I haven’t) had them removed and put back on a ton of times, so my nails are in pretty good shape.”

According to Kernick, while some people view having long nails as an added difficulty, she has found that it isn’t much different.

“I always get asked how I can do anything with them as long as they are but they’ve never really gotten in the way,” Kernick said.

Malagrino agrees that having acrylics isn’t too difficult.

“You get used to (long nails) really quickly,” Malagrino said. “My only issue was that clasping necklaces can be really hard since they’re so tiny.”

However, Koutsayanis finds acrylics can be very inconvenient.

“It’s very inconvenient sometimes,” Koutsayanis said. “Typing is really difficult — I type slower when I have long nails on because I have these big nails in the way. When I drop something, it takes me (a long time) to pick (it) up. Also when you hit your nail on something, it hurts so bad because it’s glued to your nail and it kind of rips off a little bit.”

Overall, for Malagrino the art of acrylic nails opens up a world of fun and creativity.

Malagrino said, “You can have a lot of fun with colors, so I love picking what style I’m going to do next.”