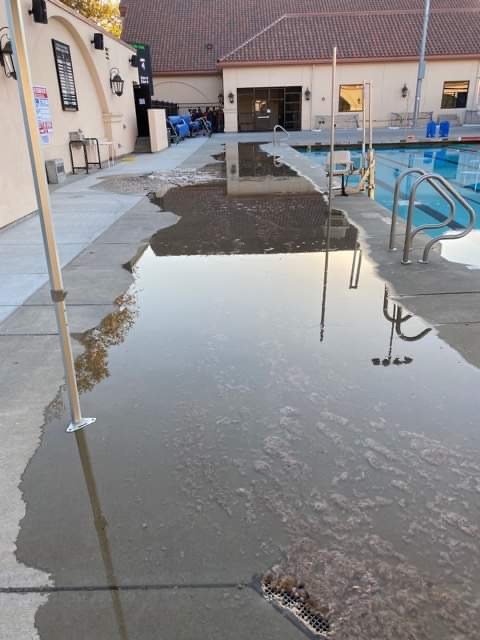 Confusion engulfed the Paly pool deck around 4:45 p.m. on Nov. 2 as the pipes of the small gym malfunctioned, leading to a sewage backup onto the pool deck and chaos regarding the Santa Clara Valley Athletic League boys water polo playoffs.

Gunn sophomore and varsity water polo starter Cole Vale was in the pool when the backup started.

“Our team started to smell something and looked behind the bench to see a fountain of sewage,” Vale said.

Gunn was playing Mountain View for fifth place in the SCVAL playoffs when the sewage first appeared.

“Our game against Mountain View was called off,” Vale said. “We gave them the game instead of heading over to Gunn to finish the last quarter.”

While Vale said the outcome of the game was not affected by the sewage issue, he was  perturbed with the timing of the event.

“I was disappointed that the game we were sending our seniors off in was ruined by the sewage,” Vale said.

While Vale and Gunn had the rest of their game canceled, Paly’s team, who was going to play in the SCVAL finals against Los Altos High School, was forced to move its game as a result of the situation.

“The game was supposed to be played at Paly,” Ijzerman said. “And it was kind of our big home game to prove to the rest of the league that we are the best team in the league. Having it moved to Gunn (High School), who doesn’t have as nice of a pool, affected our performance.”

Ijzerman said until the sewage problem is fixed, water polo practices will be held at Gunn, and he’s not happy with the situation.

Look said his team moved its final game to Gunn on such short notice because the girls SCVAL tournament was being held there, and the pool was already set up.

Steve Haney, a parent of a player on the team, was working the desk at the Gunn v. Mountain View game when the sewage problem arose.

“We kept smelling something very strong and very odd,” Haney said. “It wasn’t something that went away, so I thought the Gunn bench had done something. But the entire bench jumped up, and the ref noticed and stopped the game.”

Haney immediately could tell something was wrong when he saw players and coaches reacting to something on the other side of the pool.

Haney said a plumbing problem in the small gym lead to the overflow.

“As I understand,” Haney said. “There was a toilet running for days in the small gym, which, when faced with a blockage has to come out somewhere.”

“I noticed water running by our outside locker rooms, and thought, ‘That’s weird. Is someone using the outdoor shower?’ and then noticed that water smelled.” Look said. “And that’s when I looked up, and put it into high gear.”

Both Paly girls and boys varsity teams practiced at Gunn on Nov. 4, having to share pool time because of scheduling issues.

According to Look, Paly was able to clean the pool and deck quickly, and all Paly teams were able to resume normal practice schedules.

Look said, “To my understanding it was just all superficial on the deck, and they were able sanitize the deck.”

Both teams resumed practice at their home pool on Nov. 5,  aiding their preparation for the Central Coast Section tournaments.