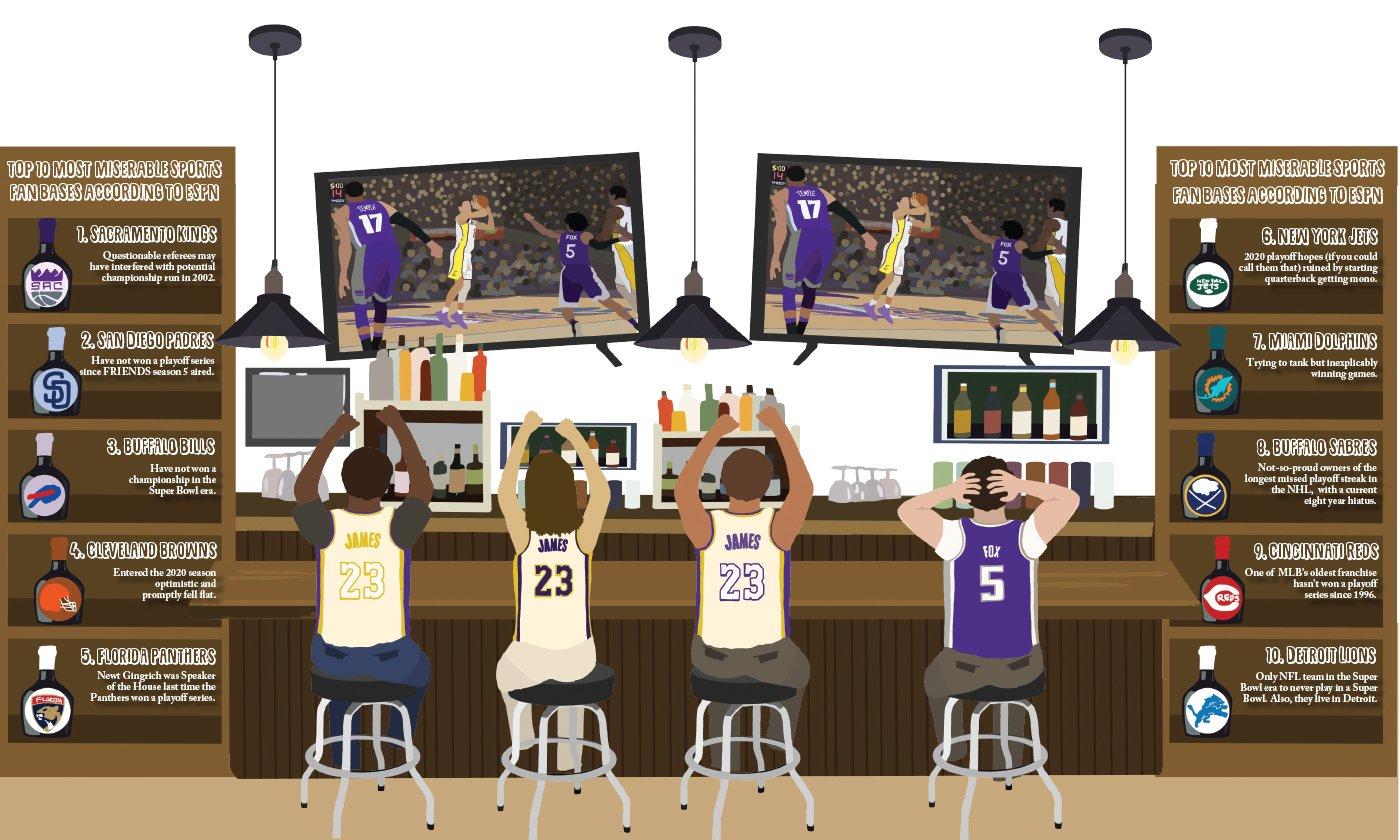 Frustration crosses junior David Snyder’s face as he avidly watches the television, his eyes darting back and forth across the screen. It’s 2017, and Snyder’s favorite basketball team, the Indiana Pacers, are challenging LeBron James and the Cleveland Cavaliers in the first round of the NBA playoffs.

Snyder grows increasingly angry as the Pacers continue blowing a double-digit lead. He slams his fist on his coffee table as they turn it over again, leading to a Cavaliers basket.

A few minutes later, the Cavaliers complete a miraculous second half comeback, capped off by a timely basket from James, sweeping Indiana and eliminating the Pacers in the first round for the second consecutive year.

Snyder lets out a groan as he realizes that it will be a long six months until he can watch his team again. For him, it comes with the territory of being an Indiana Pacers fan.

According to Snyder, there are a few main types of sports fans. The bandwagons: those who wore Warriors, Patriots, Red Sox and Capitals gear last year, and now sport Clippers, Nationals and Blues gear.

However, there is a different type of sports fan, exemplified by Snyder. The fan who screams their head off for a subpar team. Who curses out their team’s management for every terrible trade and mind-bogglingly horrible contract. Who faces public ridicule for supporting a team that’s neither elite nor Bay Area-based.

Pacers fan Snyder is a fan of an off-beat team because he said it’s more enjoyable than supporting local teams.

“Supporting an unpopular team is fun because it makes you stand out, because you’re not just one of those bozos who rattles on about how great the Warriors are,” Snyder said.

“It is more fun because if your team wins a game against your friend’s team, it’s kind of over for them,” Snyder said.

Snyder said supporting a good, though not elite, team makes regular-season wins more rewarding, although postseason success can be lacking.

“My adrenaline starts flowing, and I start feeling insanely hyped,” Snyder said. “I really feel a part of a team, and rooting for the team is just an awesome experience for me to share with myself.”

Snyder said his team is unlikely to win a championship in the near future, but has no problem with the treadmill of mediocrity.

“It’s a struggle, but you gotta appreciate that grind because when the day comes that the sun shines on us, I’ll bask in the glory,” Snyder said. “People think I’m crazy. Which I am.”

Like Snyder, junior Jackson Muma is a fan of a consistently mediocre team.

A Detroit sports fan, Muma said he chose to be a fan of the city’s teams because he wanted to be different. Muma mainly supports the NFL’s Detroit Lions, although he is also a fan of the NBA’s Pistons, NHL’s Redwings and MLB’s Tigers.

“Growing up, everyone was a 49ers fan,” Muma said. “I wanted to be different and support a different team no matter what, even when the 49ers went to the Super Bowl (in 2013).”

According to Muma, another reason why he chose Detroit teams when picking teams to follow was his father’s home state.

“My dad’s side of the family is from Michigan,” Muma said. “So I decided on the Lions, and I’ve been a Lions fan since.”

Muma said that he faces mostly negative reactions from others in the Bay Area when he tells them about his favorite teams.

“People are surprised when I tell them I’m a Lions fan,” Muma said. “The reaction is never positive, as it is pretty common knowledge that the Lions are pretty terrible. They then proceed to either ridicule them or make me feel less bad about how terrible the team is.”

Muma said that even when he begins to feel hope about his team, they often let him down anyway.

“It feels terrible; it’s really just knowing that the team will disappoint you even though you believe in them,” Muma said. “It usually happens that I get caught up in the hype or the flow of the game, but I end up disappointed more often than not.”

“Many things the team or organization does make little sense from the fans’ perspective,” Muma said. “It’s overall just frustrating to be helpless as the organization makes bad decisions.”

A recent management decision that left Muma particularly dumbfounded was the trading of safety Quandre Diggs to the Seattle Seahawks.

“His production was worth much more than we got in return, and his play didn’t warrant shipping him off for a bag of potato chips,” Muma said.

The Lions are generally not one of the worst teams in the NFL, and there have been a few things preventing them from becoming bottom feeders, which would put fans like Muma into even more potential misery.

“Matthew Stafford is the best player on the Lions,” Muma said. “He’s been on the team for so many years and has often been the only reason the Lions have been competitive in recent years. He’s so devoted to the city and the game, and I find his loyalty inspiring.”

Many sports fans take relish in beating their rivals due to the history of bad blood between the teams, but Muma has become desensitized to his Lions beating their midwestern rivals.

“While it’s great to beat the Minnesota Vikings, Chicago Bears and especially the Green Bay Packers, we lose so much that it doesn’t really make me feel better because we lose the games that matter,” Muma said.

Muma said that the only thing that could make him stop being a fan would be a terrible signing or trade, worse than the Diggs mishap, or doubling down on past mistakes.

He is also frustrated that his team is toiling away in mediocrity due to no foreseeable path to Super Bowl contention.

“At this point I would much rather them just bottom out and tank, because it’s clear that they aren’t close to competitive,” Muma said. “But deep down, I want them to compete always.”

Wong supports the Philadelphia 76ers, a basketball team infamous for tanking, a term for when a team intentionally loses games in order to get a high draft pick. Starting in the 2013-14 season and ending in the 2016-17 season, the 76ers lost a whopping 253 games.

Wong initially was drawn to the team because of this ineptitude.

“I thought it would be pretty funny to become a 76ers fan, because they were really bad, and because they went 10-72,” Wong said, referencing the team’s record during the 2015-16 season.

Initially however, Wong did not understand the practice of tanking.

“I thought they would be bad forever,” Wong said. “I didn’t really know too much about the NBA, so I started cheering for them as a joke.”

Wong said he learned what tanking was after the 76ers ended up with consecutive Number 1 picks before the 2016 and 2017 NBA drafts.

“I learned what tanking was, but it was pretty funny that they just kept losing,” Wong said. “And I did not really care as much during the tanking seasons.”

Wong said after he learned about the strategy, he became filled with optimism regarding his chosen team’s future.

“I was not frustrated with all the losing because I knew it would pay off in the long run,” Wong said. “And it did, as we found stars in the draft like Ben Simmons and Richuan Holmes.”

Wong said he faced teasing and ridicule for being a fan of one of the most inept teams in NBA history.

“People laughed at me, and they thought I was crazy,” Wong said. “They called me stupid and a moron.”

However, Wong has been vindicated. The years of turmoil nicknamed “The Process” came to fruition in the 2017-18 and 2018-19 seasons.

“We drafted Ben Simmons and Joel Embiid, and when they started playing, I started watching the team more and learning more about the other players,” Wong said. “I also began buying Sixers gear when they made the playoffs (in 2018).”

However, Wong still faces criticism from his peers regarding his team of choice.

“People still think the Sixers are a joke because Ben Simmons can’t shoot, and people laugh at us for making horrible financial decisions, like maxing Tobias Harris,” Wong said, referring to the 76ers decision to sign forward Tobias Harris to a five year $180 million contract in the 2019 offseason.

Despite facing criticism, Wong said he stands strong when his team is attacked.

“We are not incompetent, we are actually the best team in the Eastern Conference; the Bucks, Craptors and Ltics can’t stop us,” Wong said, referring to his team’s divisional rivals, the Toronto Raptors and Boston Celtics with derogatory nicknames.

While Muma said he would not abandon his team in the case of baffling ineptitude, Wong said his logic would be the opposite.

“We have not won a ring yet, but once we do, I’ll probably root for another team, maybe the Charlotte Hornets,” Wong said.

While Snyder supports an unconventional team in order to gain more of a personal stake in sports, Washington Redskins fan and junior Luke Thieman supports a sports team for family reasons, similar to Muma.

“My dad, he’s from Washington D.C., and they’re his favorite team,” Thieman said. “Even though he’s not a big football fan, he likes the Redskins, so I kinda started watching them, and now I’m a fan. I also still have a ton of family back there, so that’s why I’m a Redskins fan.”

In supporting the Redskins, Thieman said he finds himself frustrated with the team’s management, specifically the loss of the current coaches of the San Francisco 49ers and Los Angeles Rams.

“Everything is frustrating,” Thieman said. “The owner, in general, is just not a good owner, and, I mean, hindsight is 20-20, but Sean McVay and Kyle Shanahan were both once on our coaching staff, and now we have no coach.”

Thieman also wasn’t a fan of the team’s treatment of their top pick, Dwayne Haskins.

According to Thieman, the front office insinuated that Haskins was not their top choice, alienating their first round pick before he even played a game.

However, Thieman said that fans should not put all the blame on the front office, because injuries also have contributed to the team’s poor record.

Like Muma, Thieman finds himself frustrated with his team’s historic position of constant mediocrity.

Thieman did say there is some enjoyment in watching a middling team, though.

“To be honest, it’s not really that fun to watch when we’re just being OK,” Thieman said. “It was fun a couple times though, back when Kirk Cousins was still quarterback, and we were always in close games.”

However, Thieman’s team isn’t mediocre this year.  The Redskins have dropped to the bottom of the NFC standings, yet, due to a weak division, could still possibly make the playoffs, and Thieman said he is pleased with the current standings.

“If I was in charge of the team, I would just tank,” Thieman said. “This year, I would say, just throw in the towel and try to get a high pick.”

Thieman says he faces some scrutiny when he reveals that he is a Redskins fan.

“It’s always frustrating because I have to remind myself that I’m a Redskins fan,” Thieman said. “Usually they (people) understand, but one of the things about being a fan of a team that’s not from the Bay Area is that people kind of question your loyalty.”

Thieman said that liking an out-of-state team can lead to criticism no matter the success of the team in question.

While facing joking criticism from his friends over supporting the Redskins, Thieman said that he can’t see himself jumping ship.

“I’m gonna like the team regardless of what people say,” Thieman said. “Which is what a sports fan should (do).”