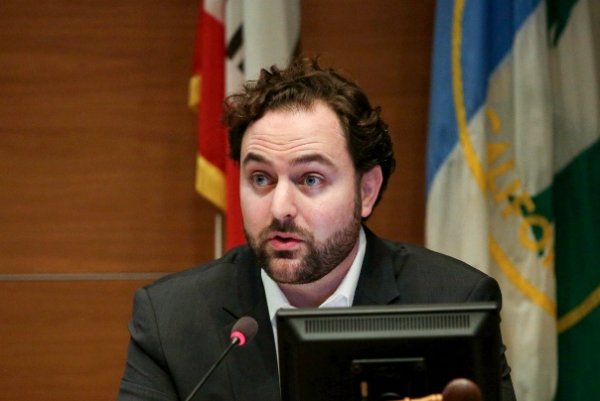 Palo Alto residents are adjusting to the new mayor’s plans for 2020 after City Council elected him earlier this month.

Mayor Adrian Fine, an advocate for business and housing growth in Palo Alto, assumed his new position on Jan. 9 after a promotion from his role as vice mayor in 2019.

As a strong supporter of Senate Bill 50, which promotes the construction of more apartment-style buildings in single family zones and transit rich areas, Fine said he sees the lack of affordable housing in Palo Alto as a pressing issue in our community.

“In the realm of housing, I’ve always had the attitude that all options need to be on the table,” Fine said.

Fine said he is open to exploring tenant protection, additional funding for housing and producing more housing for zoning changes.

Fine also said he is concerned about the recent decline in the rate at which people start families and settle down.

“It really worries me, because I think ultimately we’re a community of families, great schools and good jobs,” Fine said.

Zareen Khan, a Palo Alto resident and restaurant owner of Zareen’s on California Avenue, agrees with Fine’s perspective on solving the housing issue. In 2017, Khan bought a house in Menlo Park specifically to provide residency for her employees who couldn’t afford Palo Alto’s expensive housing options.

“We need some affordable housing so that people who work here can ultimately do it without commuting an hour,” Khan said.

Khan also mentioned how important more housing is for small businesses like her own.

“(More housing) increases foot traffic because wherever you live is where you shop… people aren’t going to go to California Avenue for one or two shops,” Khan said. “I want small businesses to survive here.”

“The notion that the zoning for all of Palo Alto should be changed to high density just seems to be an unreasonable approach,” Beamer said. “It’s too coarse of a solution for a much finer problem.”

Beamer also points out how SB50 would change lots with one residency to three or four, ultimately increasing the value of the lot and worsening the affordable housing issue.

“The demand for housing in Palo Alto is essentially infinite, and so it’s hard to believe that even aggressive densification would significantly lower prices,” Beamer said.

Fine said he understands that not everyone is in agreement with him in regards to solving the housing issue.

“I think we need to be clear with ourselves on the Council and with the community that these are imperfect solutions, and some people are going to be unhappy with them,” Fine said.

Besides focusing on solving the housing crisis, Fine said he is devoted to revitalizing Palo Alto’s charm and character by encouraging local businesses and fun community events.

“I actually can’t think of a place in Palo Alto where you can go for a concert or music nowadays,” Fine said.

Fine also mentioned the closing of Pluto’s after 20 years of business and the Village Cheese House, which had been open for 60 years, pointing out the importance of affordable eateries rather than just fancy sit-down restaurants.

“It’s important for the history of Palo Alto to be preserved,” Annes said. “When you take (the local businesses) away, you’re changing the heart of the city.”

Fine said his own history as an Ohlone, JLS and Gunn alumnus is part of why he believes he will lead Palo Alto in the right direction, even if some residents disagree with his views.

Fine said, “I’m just a kid who grew up here and cares a lot about this place.”