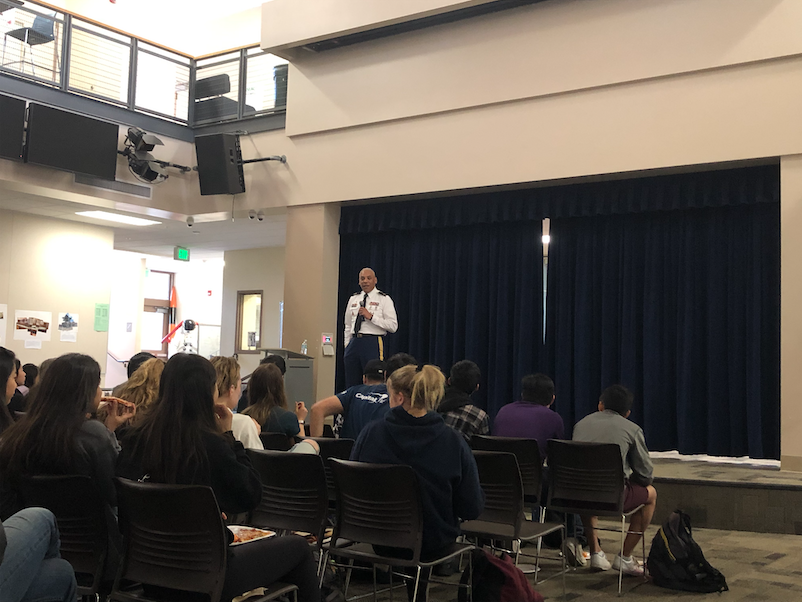 According to senior and Career Month committee president Ludovica La Rosa, Career Month is a time in which people with careers in different fields come and share their professional experiences. The two-week period consists of daily speakers discussing their lives and how they ended up where they are. These talks take place during lunch in the Performing Arts Center and Media Arts Center.

La Rosa said all students should take advantage of this opportunity because it will allow them to discover and learn about both traditional and non-traditional careers.

“It gives exposure to a lot of careers and job paths, especially unconventional ones, and it lets you learn about different careers and what you might be interested in,” La Rosa said.

La Rosa said she joined the committee as a sophomore and has enjoyed her three years on it.

“It’s definitely a rewarding experience seeing a lot of the students come to the speakers and enjoy them, and just getting to work with a lot of people from a lot of jobs is always interesting,” La Rosa said.

One of the most important parts of preparing for the event is making sure students know about it, according to junior and Career Month committee publicity manager Ryan Yeung.

“We try to publicize the events through posters, social media and word of mouth,” Yeung said. “We want everyone to know about Career Month.”

Another critical aspect of preparation is reaching out to and selecting which speakers to host at Paly, La Rosa said.

“We have some of our own contacts through parents and friends but we also search online in various job websites,” La Rosa said.

According to the Career Month committee advisor Karla Larson, the students in the committee essentially plan and run the entire event themselves.

“The committee is mostly run by students, and I’m just there to help them with the planning,” Larson said. “Our students on the committee find the speakers themselves. Every year, they send out a survey to the whole school and find out what types of speakers the students want to hear.”

This year, the committee has made an effort to choose speakers from more diverse industries than in past years.

“We try to pick speakers who are from a ton of different careers, even speakers who pursued an unconventional way of getting a job, like they didn’t go to college, for example, just to have a lot of diversity,” La Rosa said. “We have sports coaches to professors to venture capitalists. We definitely have been increasing the diversity of speakers over the years.”

Yeung agrees and said this year’s event has more emphasis on speakers in vocational fields.

“There’s a lot of different speakers, for example, there are more vocational industries like the Army or mechanical,” Yeung said.

For Yeung, Career Month is about more than just speeches. After listening to the speakers during his freshman year, Yeung said he approached them, exchanged contact information and gained many connections. This experience is what ultimately led him to join the committee.

“Freshman year, I got a decent amount of connections and it led to getting a part-time internship,” Yeung said.

According to Larson, connecting with speakers is common.

“It’s a good way for students to get connected,” Larson said. “Often times, students stay after and get connected and that can lead to something else like internships.”

Yeung encourages other students to take the same initiative.

“Afterwards, exchange contact and send them an email,” Yeung said. “It’s rare as a student to be in the presence of so many successful people. Take advantage of that.”

Yeung said networking is one of, if not the most, important skills in life and Career Month is a great opportunity to start practicing.