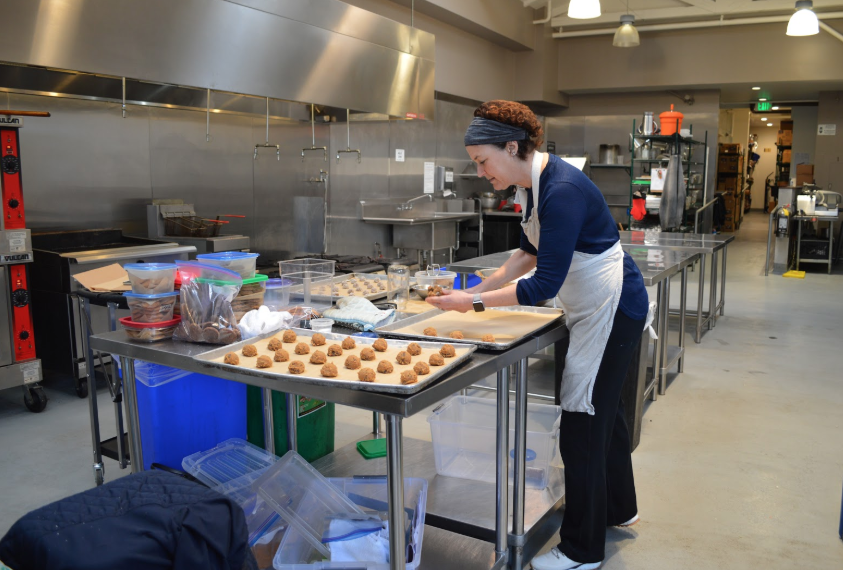 Two outdoor cafe tables, the scent of fresh dough and melted mozzarella, and a storefront covered with colorful murals occupies 3242 22nd Street, San Francisco. With a pride flag stationed by the entrance and a “Gabriella’s New York Pizza” banner looming over the door, it seems like nothing more than a typical San Francisco pizza parlor.

That is, until you open GrubHub to find that very address listed as the location of six other establishments: Chubby Pie, Lorenzo’s of New York, Pizzaoki, Soho’s and Sunny Day Creamery.

These brands are the brainchildren of Family Style Inc., a LA-based restaurant business aiming to corner the market on the rising star of the food industry: online food delivery.

Online food delivery started off as a risky experiment for Pizza Hut in 1994, and eventually became a national phenomenon that sparked the launch of thousands of online food delivery apps and ordering sites. It has grown into an industry that, according to Statistica, generated $107.4 billion of worldwide revenue in 2019 alone.

A report from L.E.K. Consulting shows there is no sign of its growth stopping anytime soon, stating that restaurant delivery is projected to grow at a rate more than three times that of on-premises sales by 2023, with digital deliveries projected to have a compound annual growth rate of 22.3%. This boom in online food delivery has led to a series of innovative game-changers, with one of the most prominent being ghost restaurants.

According to Upserve, ghost restaurants, or virtual restaurants, are food service businesses with no storefront, waitstaff, seating or dine-in patrons. Instead, they target consumers who order food and catering online through their own websites or third-party delivery apps like UberEats and DoorDash, where it’s impossible to distinguish them from traditional eateries without some Internet sleuthing.

If you can find multiple restaurants listed under the same address, they’re probably ghost restaurants. Most ghost restaurants fall into two categories: those linked to brick-and-mortar establishments and those residing in commercial kitchens, dubbed ghost kitchens.

The Faboo-lous and the Frightening

There’s a reason for everything, and ghost kitchens are no exception. Aside from an increase in sales, having multiple platforms and brands offers customers more options in terms of delivery app, payment choice and different menu items, according to Bernard Piccoli, Amici’s manager.

“It’s an option for the customers in the way they (food delivery apps) charge, like at the end of the month, or right away on their credit cards,” Piccoli said. “(The goal) is to have more third-parties, to get more customers from our end and to give more options to customers on their end.”

Piccoli said that using third-party food delivery apps is also more time-efficient, since the process of manually entering information into Amici’s point-of-sale system is unnecessary for orders from these apps.

“(The process) usually takes about a minute — it depends on the type of the customer and the speed and the time of the call,” Piccoli said. “But with the integration that we started adding over here, the order comes through UberEats, we confirm with them and then it prints directly in the kitchen.”

Forage Kitchen is an example of how communal kitchen culture is part of the appeal for businesses working from ghost kitchens.

“I love the community and the fact that everyday, there’s somebody different making whatever their passion is,” said Johanna Sedman, the owner of Scenic Made.

As mentioned by Forbes, ghost kitchens also give entrepreneurs the opportunity to start a business they’re passionate about without having to worry about the added cost of a traditional restaurant setup, the hassle of obtaining legal certifications or a defined schedule.

According to Scenic Made’s website, Sedman was inspired by her mother’s delicious baked goods and the care packages she sent Sedman during her college years, a tradition that lived on with Sedman and her own son in college. With Scenic Made, she says she aims to capture that comforting love in her organic sweets.

“I couldn’t do my business without having a commercial kitchen where I could come and use it hourly because it would be too expensive,” Sedman said.

Sharon McGinnis-Girdlestone, the owner of My Sustainable Table, started her business out of concern for the way store-bought products and processed snacks were   adversely affecting her son. She said she’s always made an effort to give back, and My Sustainable Table is no exception, providing meals for the homeless on multiple occasions.

“It’s illegal to do it at home,” McGinnis-Girdlestone said, referring to how home-based businesses are limited to selling low-risk cottage foods. “The cost of brick and mortar, extra staff, insurance, etc. would probably outweigh the benefits we see by utilizing a commercial kitchen, where we set our own hours.”

However, according to The Food Corridor, this business model comes with its own set of challenges, one of the most impactful being delivery.

“The hardest part is maintaining delivery staff because it’s a part-time job for them, so most people move on after six months,” McGinnis-Girdlestone said.

“We’re really picky with quality here, and our own delivery drivers have thermal bags for everything to keeping like the temperature as high as possible to deliver to the customers,” Piccoli said. “Most of the time, I’d say 90% of the time, UberEats drivers, DoorDash drivers, GrubHub drivers — GrubHub drivers are a little better, they have bags — the others, they don’t (have bags). Whenever they collect the food over here, they go to their car. Especially now that it’s really cold and sometimes they park far  … the quality gets affected.”

In 2015, an NBC 4 New York exposé revealed that more than 10% of the 100 top-rated GrubHub and Seamless restaurants were hidden ghost restaurants, including several originating from restaurants with sanitary violations and non-retail commissionaires with no proper permits. This launched a frantic attempt to weed out such listings from both apps.

Though their past still haunts them, most of the stigma has been forgotten by the general public, or at least, by the Paly population.

“I wouldn’t care whether or not I’m eating from a ghost kitchen or a normal kitchen because unless the food quality is significantly different, I don’t think there’s a difference,” junior Justin Qiu said.

An online survey of 75 random students through a Google Form distributed on social media showed that most Paly students agree with Qiu. Only 12% of survey respondents said that they would care if their food was coming from a ghost restaurant, mostly due to concern for the food safety, while 54.7% of them said they would not care. 33.3% chose the “Depends” option, with all of them citing uncertainty about the conditions of the hypothetical ghost kitchen as their reason for hesitating. Most of the “Depends” respondents also stated requirements along the lines of “as long as the food is safely and properly prepared” or “as long as the quality is good.”

Rise from the Dead

Ghost restaurants have recently resurfaced with a fresh look and a respectable reputation, as reported by Forbes. Independent owners and companies alike ensure that commercial kitchen businesses like Forage reach, if not surpass, the sanitation of traditional restaurants, since state food safety codes and regulations still apply.

Ghost restaurants have received support from various food delivery apps and companies who have helped users start their own virtual restaurants, with UberEats contributing to the launch of 4,000 of them worldwide, according to Kristen Adamowski, the head of Uber’s ghost restaurant program.

Another supportive service is Joyrun, the Silicon Valley-based peer-to-peer delivery app originally designed for college communities. Though ghost restaurants aren’t an integral part of the formula since users place orders depending on where runners are already planning on going, JoyRun has partnered with several of them to make them available for their users, as stated by sophomore Neil Rathi, a Growth Marketing Intern for Joyrun.

“(These partnerships) allow JoyRun users to run and go to those restaurants even though they are not technically real, full restaurants,” Rathi said. “We are partnered with approximately 5 chains that have ghost restaurants, including Chick-fil-A, the Halal Guys and Rooster & Rice.”

The New York Times reported that big names in both the tech and food industry have started their own chains of ghost kitchens. For instance, JoyRun’s ghost restaurant partners are all from the DoorDash Kitchens, a ghost kitchen started by DoorDash itself in Redwood City.

Theresa McDermott, a member of Paly’s CTE/Work Experience department, said, “As long as good sustainable practices are put into place, I think that ghost restaurants can and probably will be very successful.”