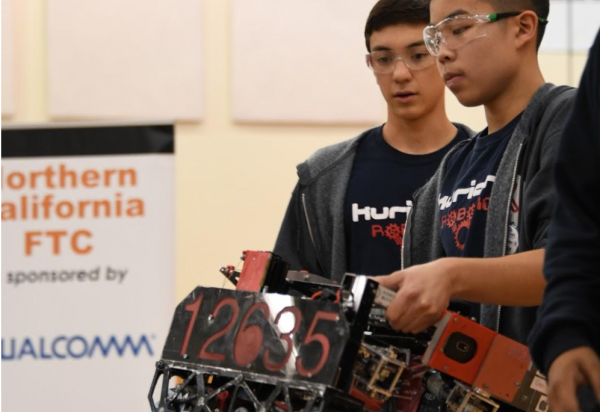 Many students at Paly have decided to pursue their passion for STEM through an unconventional path: joining a non-school affiliated robotics team. Whether it’s forming a team before entering Paly or not being able to be a part of Paly Robotics, these students believe that participating in robotics outside of school is for the better.

Despite not making the Paly Robotics team, freshman Daniel Siegel, who is a member of the newly formed Jump Robotics, did not want to let this obstacle deteriorate his passion for robotics.

“(Our team) was not going to let this take us down because we like robotics, and we’re just going to keep going at it,” Siegel said. “So, we decided to look at the options, and we decided to make our own team.”

Tony Espinosa, the mentor for Jump Robotics, said that not making the Paly team was the motivation that the members needed to overcome their challenges and form their own group.

“It was a set of guys who were really excited about the For Inspiration and Recognition of Science and Technology (FIRST) Robotics Competition (FRC), and their first choice would have been to join (Paly Robotics, an FRC team),” Espinosa said. “But I have a saying that I believe in which is that sometimes, the obstacle that gets in the way actually becomes the way.”

In FRC, high schoolers build a robot under 125 pounds and compete on a 27-by-54-foot field with a budget almost 10 times greater than that of the First Tech Challenge (FTC). In FTC, teams are limited to 15 students from grades seven to 12, and build a robot which fits in an 18-inch cube, while competing on a 12-by-12-foot field. Both are hosted by the non-profit organization FIRST.

Sophomore Sam Duong, the team captain of FTC Kuriosity Robotics founded in 2014, said that he did not want to leave his team for Paly Robotics as he had run it for so long and helped the team garner a strong reputation.

“I also had learned so much from starting a team from scratch and saw that what I would learn in FRC would not be worth what I could learn in the First Tech Challenge (FTC),” Duong said. “In FTC, you get to try everything as the teams are much smaller, and as a result, I’ve gotten to learn all of the engineering aspects.”

According to Duong, most students choose to participate in only one team, either FRC or FTC, due to the large time commitment that would be needed to do both at once.

Senior Chi Tran, who joined Kuriosity Robotics before entering Paly, believes that through being on a community team, she can bond with people outside of Paly and continue building upon the good memories she has with the team.

“Our team was formed before I entered Paly, so when I eventually became a freshman, I decided to stick with the team that I had already developed close connections with,” Tran said.

One advantage of being part of a non-school affiliated team is the fluidity in the team structure and being able to work in different sub-teams. Members are typically divided into sub-teams that have certain responsibilities, such as the building of the robot, programming or the business aspects of the team.

“Community teams allow you to have more freedom because you could switch sub-teams if you want,” said sophomore Jerry Fang, who is a member of a Palo-Alto based community robotics team, Peninsula Robotics. “The entire team is closer together since they’re not as divided between sub-teams.”

Freshman Arthur Balva, who is on Kuriosity Robotics, said that on a smaller team, members have more involvement and the team is more tight-knit.

“When you’re very spread out as a team, the team chemistry isn’t as strong,” Balva said. “Also, you don’t get to be involved in as many things as you want to.”

For Balva, being on a community team allows him to further enjoy his passions.

Siegel also believes that being on a community team allows for fewer boundaries and restrictions.

Like Siegel, Duong enjoys the freedom of working in a nearby garage that is constantly open, whereas schools are only open at certain times. Additionally, Duong believes that he is able to learn more on a community team due to being more involved on a team with fewer people.

“There is no overhead in terms of management, we don’t need to be monitored by the school, don’t have to follow a certain code, and I also get to go and work on the robot whenever I want,” Duong said. “I get to contribute to every part of the robot including (coding), (designing) mechanisms, and manufacturing parts.”

However, freshman Wesley Ma, a member of Jump Robotics, said that there are also downsides that come with being on a robotics team that is not affiliated with a school.

“We’re starting with fewer resources and less knowledge, so we have to experience more and learn more in a short amount of time,” Ma said. “We are also pulling in a lot less funding than the other teams in this area, especially Paly Robotics.”

Whereas Paly Robotics receives funding from the school district on top of sponsors, local community teams are typically self-funded.

“We have to raise the money from family members and anyone who wants to support us,” Espinosa said. “We don’t have as many people, as much machinery, and we have to make do with more basic tools.”

Espinosa says that due to the fact that most Jump Robotics members are in their first year of robotics, they make a lot of mistakes but look to learn from these errors.

“The strong suit of the whole program is that everybody who’s into it does it because they love doing it and would do it even if there wasn’t a competition,” Espinosa said. “In the process of doing that, they just learned so much frankly by making tons of mistakes, trying again and then having incremental success along the way.”

Other teams, such as Peninsula Robotics also have to deal with financial problems, as well as difficulties in recruiting.

“If we had some extra money, it definitely would help because we could purchase more tools or more expensive things like our carbon fiber,” Fang said. “Recruitment wise, (Peninsula Robotics) just stepped up this year because the senior leadership realized that after this year, a lot of seniors would be gone, and for the team to continue, they need to add more members.”

According to Duong, a difficult part of recruiting is simply getting the team’s name out to the public. Sophomores Nicholas Shinghal and Diego Diaz, both members of Paly Robotics, did not realize the option of joining a community team prior to applying to the school team.

“I had not heard about community (robotics) teams, partially due to summer programs like Paly Robotics’ summer camp being my primary point of contact with high school extracurriculars,” Shinghal said. “This presence in the school also allows (school) teams to advertise to the school community and expand the impact of the team.”

Despite these drawbacks, Duong strongly recommends those who have a passion for STEM to participate in community robotics teams.

“It is definitely a unique experience,” Duong said. “And unlike many people think, you can learn just as much, (if) not more than (being on) a school robotics team.”