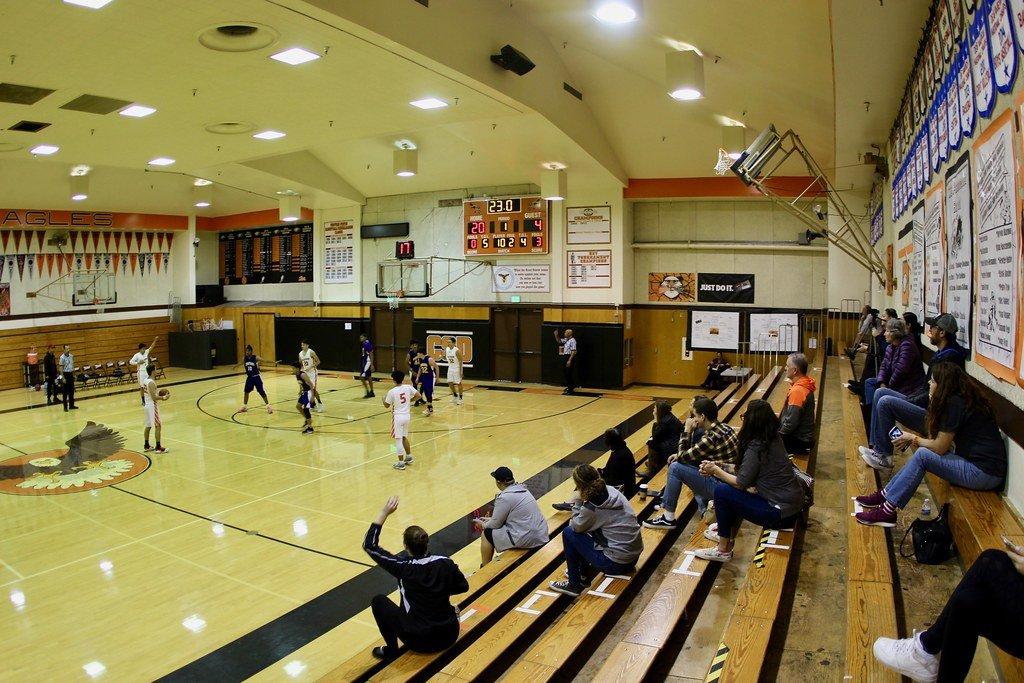 As junior Elif Turgut huddles with her teammates to prepare themselves for their Central Coast Section championship game against Menlo-Atherton High School, she envisions the stands filled with the same roaring crowd of fans that supports the boys varsity basketball team at the girls varsity games. The reality of fan support for the girls, however, is far from Turgut’s expectations.

“People typically only want to go to the boys games,” Turgut said. “They disregard girls’ games as though (we) don’t even play a sport. It’s very unfair how the student body does not want to support us, but they want to support the boys.”

Turgut said she attributes this significant difference in fan support to a consensus among the student body that the boys team is “better” than the girls team and more worthwhile to watch.

“I think this happens because people believe that boys are ‘better’ than girls at sports,” Turgut said. “In my opinion, it shouldn’t matter who’s better. Both teams are playing in a league that’s competing at their skill level. Also it doesn’t matter because skill level should not determine the amount of support you get from your school.”

Boys varsity basketball player Andrew Li, unlike Turgut, said he doesn’t think there’s a general agreement among the student body to only attend the boys games.

“I don’t think there’s an agreement among students to only go to boys games, as there are some students that come to both (games),” Li said. “But I do notice the issue that more people tend to want to come to the boys games more often than they want to come to girls games.”

Girls varsity basketball coach Scott Peters said the differing amounts of fan support is also true for professional basketball within the NBA and WNBA leagues. The NBA, too, tends to be better marketed and more televised than the WNBA, rendering a bigger fan base for the men’s league, Peters said. According to the World Sports Network, the average annual viewership of the NBA in 2019 was 15.14 million, and 231,000 for the WNBA in 2018.

“I think it’s definitely true that in professional basketball the men’s teams get more support because the experience is more enjoyable for the fans,” Peters said. “The whole experience produced by the NBA is better because the games are better promoted (in) media.”

Li said he acknowledges that more people support the NBA than the WNBA, but that the opposite is true for other sports.

“I do notice the issue when it comes to professional sports, as some sports like women’s soccer tends to have more fans than men’s soccer, while leagues like the NBA have way more fans than the WNBA,” Li said.

According to Li, there’s little that can be done to improve the turnout for girls games, as it’s completely up to the students whose game they choose to attend.

“I think the girls deserve the same fan support and their games should be respected just as much as the boys, but it is really up to the students to decide which games they would rather see,” Li said. “I’ve heard they have tried to give free tickets to the girls games in order to incentivize more students to come, but I’m not sure what else can be done as the students don’t seem to care all that much whether the tickets are free or not.”

Peters said instead that better promotion of the girls games will move more fans to attend both games.

“The promotion is better for the boys team which makes the overall experience of the game more enjoyable than the girls team, which is why if we can replicate that experience more people will want to come to the girls games too,” Peters said. “More people know about the boys games because there are more posts on social media telling people to go and more advertisements for it by the student body.”

According to Peters, the issue of a lack of fan support is not just for the girls basketball team, but also for other Paly athletics. To combat this, Peters suggested the establishment of a sixth man club, a group of students to motivate players and rally fans, for all of Paly athletics.

“If we had a sixth man club we could use them to promote games and get students excited about sporting events,” Peters said. “Fans could be part of the game and it would convey that same excitement that students feel when watching the boys basketball games for all sports.”

Turgut said that although the fans that do come to the girls games do not go unnoticed and unappreciated, the Paly student body is selective in where it chooses to demonstrate its support.

“For those who do come to (our) games, I really want to let them know that I appreciate them coming,” Turgut said. “Paly definitely has pride, but not towards everyone.”