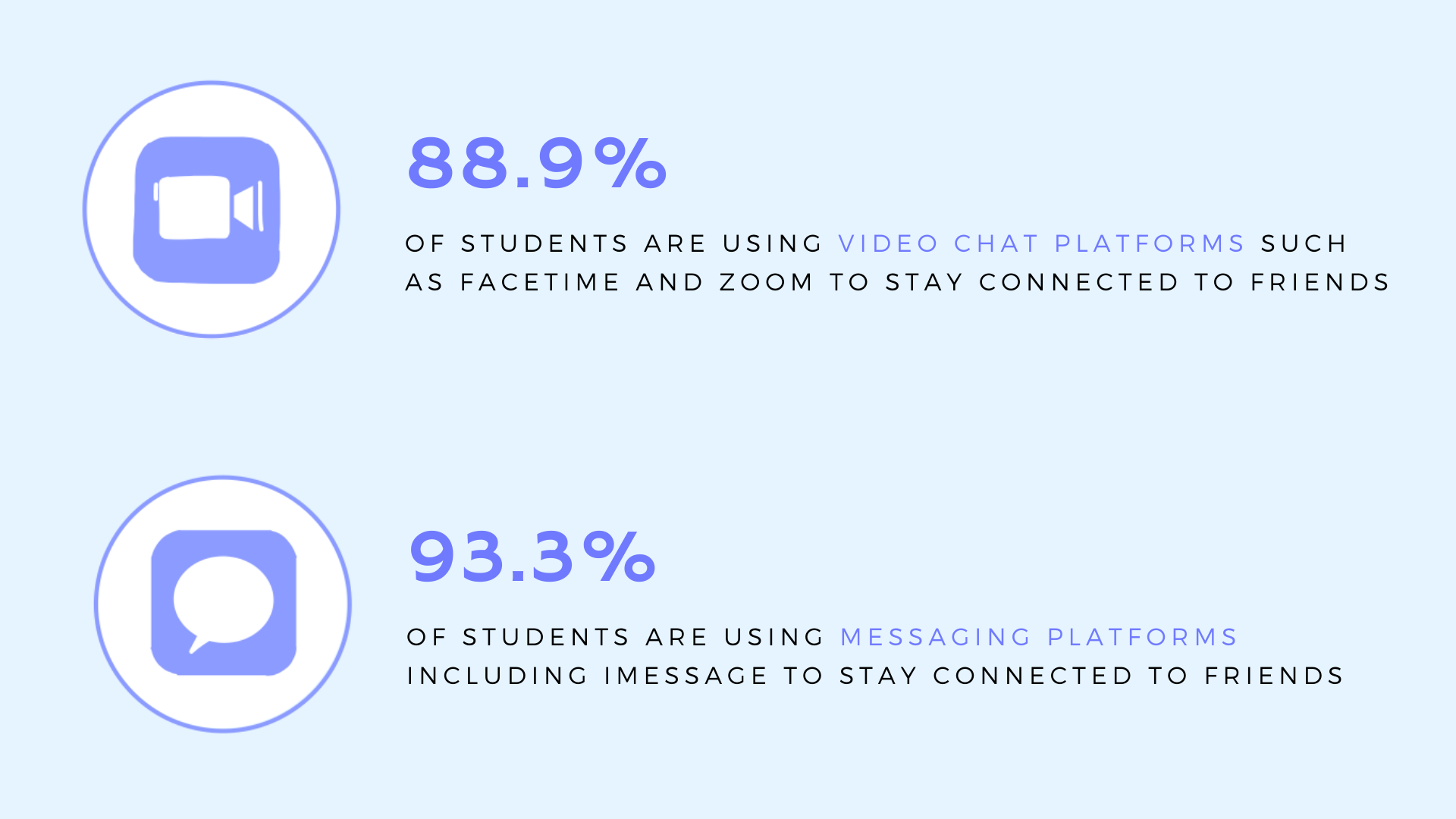 Students use digital means to stay connected under COVID-19 quarantine

A month ago, a movie with friends would have junior Stephanie Peng driving to the nearest theater, hugging her friends, buying concessions and enjoying a new release. Today, it entails sending a link to a Zoom meeting to her group chat, sharing her screen, streaming an old favorite on Netflix and chatting with her friends in the chat bar.

In light of the rapid outbreak of COVID-19 in the U.S., the Santa Clara County Public Health Department issued a shelter-in-place order that will stay in effect until at least May 3. The order calls for all county residents to stay home, to only leave their homes for essentials such as grocery shopping, exercise and medical care, and to keep a distance of six feet from others who do not live in the same household.

The Campanile surveyed 45 random Paly students through a Google Form distributed on social media two weeks after the Paly school closure began on March 16. The survey showed that over 96% of students surveyed are adhering to the shelter-in-place quarantine order and spending their time in isolation.

“I don’t really see anyone (in person),” junior Callan Malone said. “I’m doing that because there are so many people (for whom) this is a really serious issue, and I feel like it’s not fair to just do whatever you want during this time.”

Similarly, senior Tyler Liu said he has been spending most of his time at home helping out with cooking and reading books. Liu only leaves the house to exercise, in accordance with the shelter-in-place order.

“You’re helping other people out by staying at home, because you put others at risk if you go outside — you may not get sick, but you serve as a sort of vessel for others to get sick because they have compromised immune systems,” Liu said. “It’s incredibly important that you do your part to stay home and then hopefully when this all subsides you can go back to doing other activities that you want to do.”

The COVID-19 epidemic sets itself apart from those we have had in the past for one main reason: the rise of social media.

“We have social media, and I imagine that in the 1918 flu pandemic it must have been a very different situation,” sophomore Madison Abbassi said. “Students couldn’t really continue their learning or stay in contact with friends, so it must have been a lot more isolated in the past.”

Despite being physically isolated, Malone, Liu, Abbassi and Peng, along with over 93% of their peers, have still been keeping in contact with their friends through digital means including online messaging and video chatting platforms.

“I call or FaceTime some friends at least once a day,” Malone said. “I think it’s helped me get through (the quarantine).”

Across the globe, people are turning to social media to stay connected — according to a TechCrunch study published on March 26 that surveyed over 25,000 consumers, WhatsApp, Facebook and Instagram have seen an overall 40% increase in usage since the outbreak began.

Freshman Daniel Garepis-Holland said the shelter-in-place order has made him use FaceTime much more.

“I’m FaceTiming people for a couple hours every day,” Garepis-Holland said. “If I didn’t have that, I don’t know what I would do (to get through the quarantine).”

Liu said the quarantine has given him the time to explore new ways to stay connected to his friends.

“(Being under quarantine) provides many opportunities for me to look for new ways to get more creative,” Liu said. “I really like creating music, and I send these music projects to friends, and then they edit their music project a little bit and then they send it back to me, and we kind of have this back and forth social thing where we build songs — that’s probably been my favorite part.”

Liu said he has also been using Zoom and FaceTime to communicate with friends and relatives, and has started using Discord much more than usual. Similarly, Malone said the quarantine has made her turn to unfamiliar means to stay connected to her friends.

“(My friends and I) don’t normally communicate that much through technology,” Malone said. “We (usually) just show up at each other’s houses, and obviously that can’t happen right now so it’s been very different.”

Abbassi said she has also spent her quarantine finding new, creative ways to keep in touch through baking over long FaceTime calls with her friend group.

“We had this night where we were all making those Bestiefy (custom trivia) quizzes and quizzing each other,” Abbassi said. “We stay in contact over the different things that we’re making — like a lot of us all made banana bread within a three day period, and exchanged notes on how it was going for us.”

For at least the next two months, as Superintendent Don Austin announced on April 1 that school will stay closed through the end of the school year, Paly students will remain in isolation under the extended school closure and shelter-in-place order, using digital means to keep in contact with others.

“When we’re in isolation, we can only be in our home, and the only few people we see are our family members,” Peng said. “Something I really miss is seeing friends and just talking with people, but (digital communication) has definitely helped me feel more connected since I can’t physically go see people.”