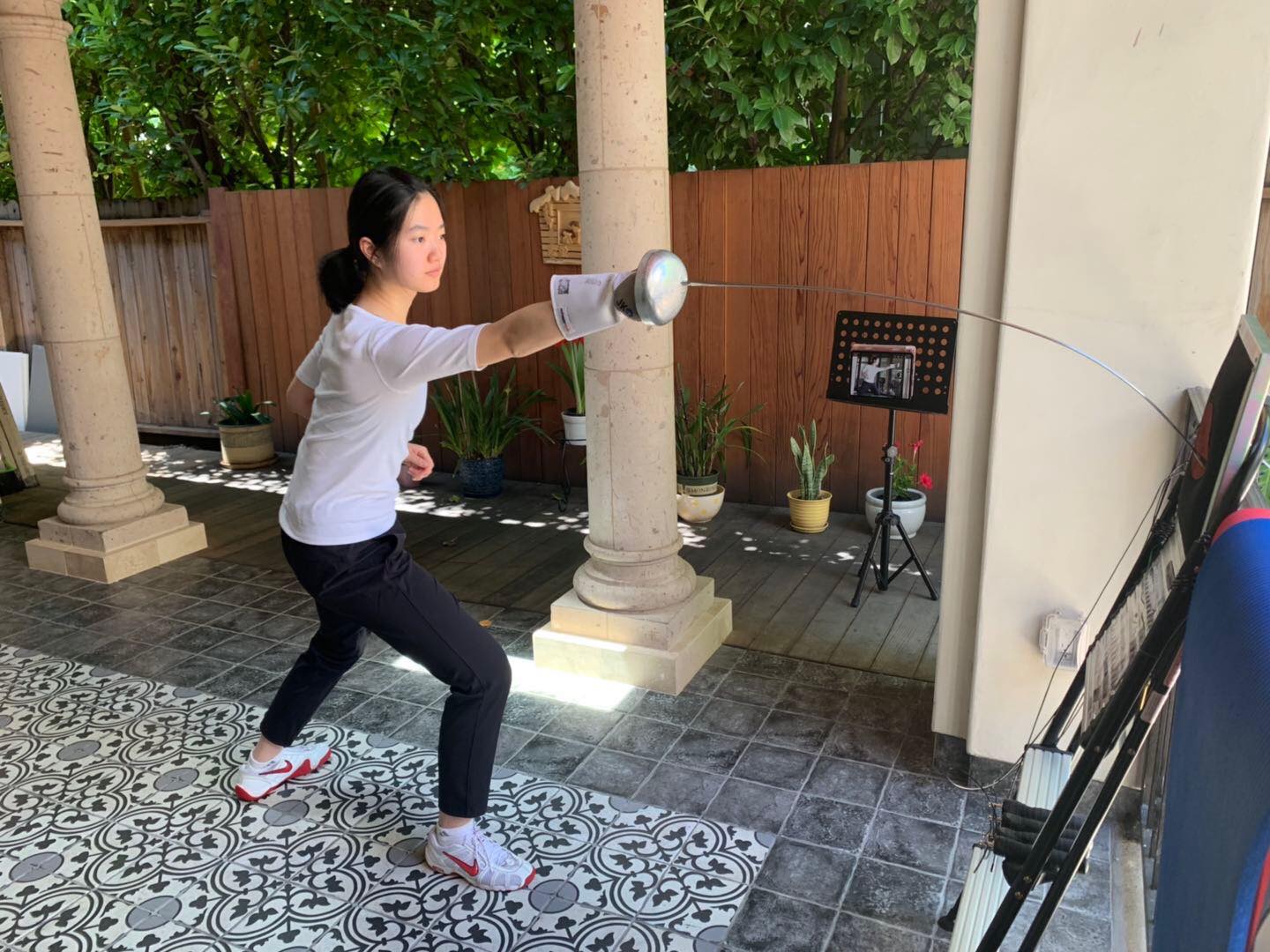 As the clock strikes 4 p.m., junior Audrey Chu joins her daily fencing practice via zoom which primarily focuses on hitting drills on a still-target and staying in shape.

The Academy of Fencing Masters, the club at which Chu attends, is among the numerous sports teams that have resorted to hosting online practices in an effort to comply with the current shelter-in-place order. According to Chu, the online team practices are much less intensive than in-person practices, particularly for a combat sport like fencing.

“You get the most out of in-person drills and actually competing with other fencers,” Chu said. “Online practices can only help us stay fit because the technical requirements for fencing are too high.”

Chu, like many other student-athletes, has also resorted to taking online private lessons with her coach to continue practicing her craft. However, the lack of physical instruction makes addressing mistakes for coaches much more difficult, according to Chu.

“My coach tries her best to correct my mistakes, but there is only so much that she can do because she is not actually giving me an interpersonal fencing session,” Chu said. “During group lessons, however, coaches rarely correct mistakes because there are so many students for them.”

During her online lessons, Chu said she has noticed her coaches are more personable than in traditional face-to-face practices.

“They encourage their athletes and compliment them for attending the practices because at this point in time, self-discipline is what matters the most,” Chu said.

According to Irina Chirashnya, one of Chu’s coaches, online practices are essential to maintaining fencers’ motivation, shape and sharpness. She said online practices provide coaches with the opportunity to explore new aspects of teaching.

“Coaches are able to focus on things that they cannot focus in class for many reasons, and now those elements are under a great deal of improvements,” Chirashnya said.

While online practices can’t substitute in-person practices in fencing due to the need for partner drills and bouting, Chirashyna said she plans to incorporate a mixture of both online and in-person practices to AFM in the future because of its effectiveness in improving certain skills.

For team sports, junior and Palo Alto Soccer Club 03G White player Callan Malone said online practices differ in that there isn’t as much of a reliance on teammates, and that online practices are more focused on footwork and fitness.

“We are all on a Zoom call together and depend on each other in that sense, but I am not going to miss out on new playing strategies,” Malone said. “There is nothing happening in them that I couldn’t do myself another time.”

In sports like dance, where timing, rhythm and coordination are crucial, junior dancer Summer Sun said although her team’s online practices are less intense, they’re still difficult because the team attempts new combinations every week, leaving less time for conditioning and technique.

And she said because of technical issues such as connection problems and lag-time with music, the chemistry of dancing with a team through the screen isn’t the same. While Sun’s dance team practices are mandatory, other sports’ practices are not, which leads to a decline in online practice attendance.

Junior and volleyball player Kimi Lillios said many athletes have less motivation to attend online practice than they did for attending in-person practice because athletes are prioritizing their schoolwork.

“I think part of the motivation of playing a team sport in-person is the atmosphere and being able to interact with everyone and having to rely on your teammates to build the sport,” Lillios said. “My motivation is competing and getting better whereas in online workouts I’m less motivated for the sport.”

“There are just so many benefits, and I think people overlook the fact that even though we’re physically separated, that doesn’t mean we can’t try to uphold some of the norms that were in place before quarantine,” Lillios said.

While physical practices can consist of passing the volleyball between people, Lillios said her team’s online practices focus more on strength than cardio. When practicing a specific skill for a sport, Lillios said athletes are inadvertently doing a lot of cardio, even when simply transitioning between activities. However, since there are no teammates to train with at home, players focus more on individual improvement by turning to weightlifting and strength-building workouts.

Unlike individual sports where success depends mostly on the individual, success in a team sport is dependent on all members doing their part.

“There’s really no way to emulate team chemistry and connections when you’re at home alone and it is such an integral aspect to this sport that often seems to be taken for granted,” Lillios said.

While online and in-person practices differ immensely in terms of motivation and what’s practiced, athletes like Lillios say they will continue to make the most out of the current situation so they are prepared for when the season resumes.

“It’s going to be a struggle to get back into the rhythm,” Lillios said. “But I’m more excited than ever to see my teammates again and get back on the court.”