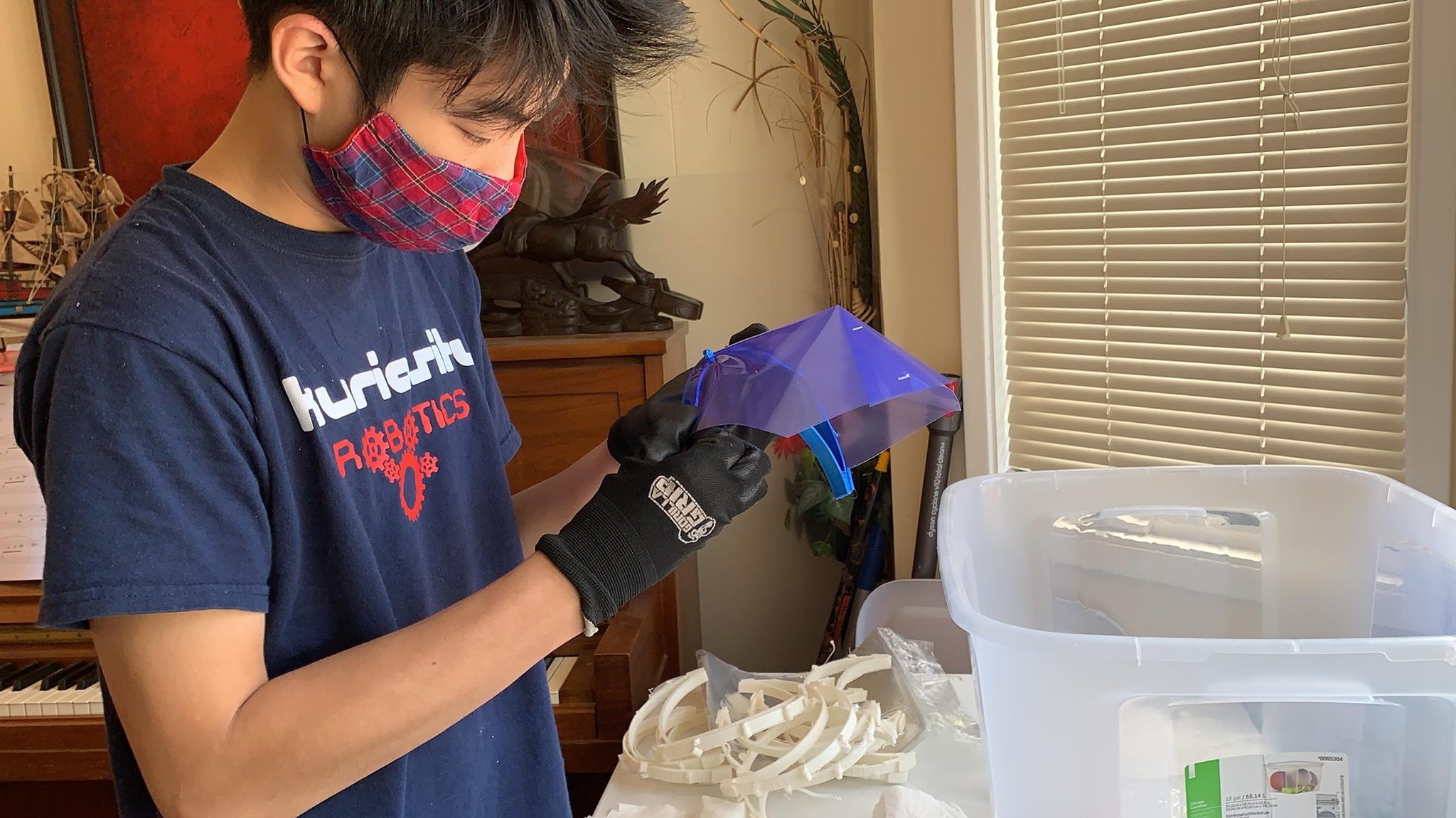 Students give back to community during COVID-19 pandemic

Three 3D printers sit side by side, spitting out frames for face shields while sophomore Sam Duong assembles his daily 40 face shields to donate to frontline workers.

According to Duong, he and his team decided it would be valuable to help the community by designing and producing face shields during the team’s offseason, when competitions come to a halt and teams stop building their robots.

“We are a robotics team, so we have a lot of technical experience and machines,” Duong said. “Currently, we don’t need to build a robot, so we might as well use (our resources) to do something good.”

Despite his teammates’ help, Duong said he still spends much of his free time working on the project.

“I’ll spend one or two hours assembling the face shields and boxing them,” Duong said. “We’re constantly running 3D printers, so every so often there will be one that breaks and needs to be fixed real quickly.”

Amidst spending the time to produce, assemble and donate face shields, Duong said he has set a series of large goals for himself and his team. As of May 4, he said the team surpassed the mark of donating 2,000 face shields.

“We set milestones along the way,” Duong said. “The initial goal we set was actually 5,000, but if there is still a need for face shields after that, then we’ll still continue to make it.”

Producing these shields is not cheap, though; Duong said they can cost up to $2 each to produce. To support these costs, he said his team has set up a GoFundMe, raising nearly $7,000 as of May 7. Duong also said they are attempting to find ways to use less expensive materials such as elastic, 3D printing filament and thin plastic.

“We either directly buy the materials, (or) partner with a bunch of companies locally and also all across the country who have generously supplied us with free filament, plastic and 3D printers,” Duong said.

Duong said finding places to donate the shields is easy, as many organizations such as Kaiser Permanente and Palo Alto Medical Foundation have expressed a need for them.

“We just search up, for example, nursing homes and hospitals near us and contact them,” Duong said. “A lot of places also email us directly asking for face shields.”

Duong said this project has been a rewarding experience for him and his team, as he’s been able to use his skills to help the community.

“It’s kind of cool to see us use our knowledge and apply it into the real world for a good cause,” Duong said. “It’s also kind of like running a startup a little bit: (we’re making) our own product, marketing it and trying to get it out there.”

Meanwhile, sophomore Freddie Kiessling has started his own tutoring service called Palo Alto Free Tutoring to help out with the negative effects of online schooling on some students.

“There’s homework, and it’s hard to understand because it’s online, especially when you are watching a video because it’s different from an in-classroom experience,” Kiessling said. “I thought it was a good idea to tutor people because I saw that my two siblings need a lot of help, and my parents are both working jobs from home so they can’t really help.”

To follow through on his idea, Kiessling gathered some friends and began reaching out to the Palo Alto community.

“We made an online website and sent out an email to different schools, like JLS Middle School,” Kiessling said. “Kids started contacting us, and right now we have around four kids that we are all tutoring.”

Kiessling said it took him some time to get the tutoring service started.

“For the website, it took me a couple of days to add people, make the structure or write down contact information,” Kiessling said. “In the case of teaching, I’ve done around 25 hours in the last two weeks.”

To follow the social distancing guidelines, Kiessling said that he utilizes a platform called UberConference, which has all the features of Zoom without the basic meeting time limit.

“I don’t use Zoom because Zoom only goes for 40 minutes, and I normally do an hour to two hours,” Kiessling said. “I just send a link to a person and they just click on it and join, and you can share screens like (on) Zoom.”

Kiessling said running this tutoring service has paid off for his students and for himself.

“It’s definitely satisfying knowing that I helped a student with a particular assignment (or quiz) she was struggling on,” Kiessling said.

Paly junior Tommy Hall said he is also working to give back to his community by volunteering with the East Palo Alto Boys and Girls Club food drive.

“At first it was just my mom saying that they needed help, and obviously we had nothing better to do with our time,” Hall said. “But once I started going, I really liked it because everyone there is really great, and it’s a fun environment to be in, especially when you’re doing something good.”

Hall said he and the others who volunteer for the food drive with the East Palo Alto Boys and Girls club all have the same goal.

“We’re just trying to feed the hungry,” Hall said. “The goal is to be able to give food to everyone who (cannot access it) or cannot afford it themselves. (We) try and go two or three times a week, and usually spend two or three hours there each time we go.”

Hall said he and the other volunteers start serving meals at 6 p.m. to the cars coming through.

“You just ask for how many (meals) they need, and you put the (number) of meals they ask for on the table in front of you, and they have to come out and get it,” Hall said. “You can’t really be (handing meals) to people because (there’s) a lot more (risk for) cross-contamination if you do that.”

Hall said that in just one day the Boys and Girls Club food drive gave out over 2,000 meals, served hot. He also added that more Paly students should volunteer as the food drive could always use more help.

Hall said he has learned a lot about what the less fortunate have to go through during this pandemic.

“(The food drive) was eye-opening because I was able to view what it was like for those who aren’t as lucky as I am,” Hall said. “It really makes me appreciate what I have.”