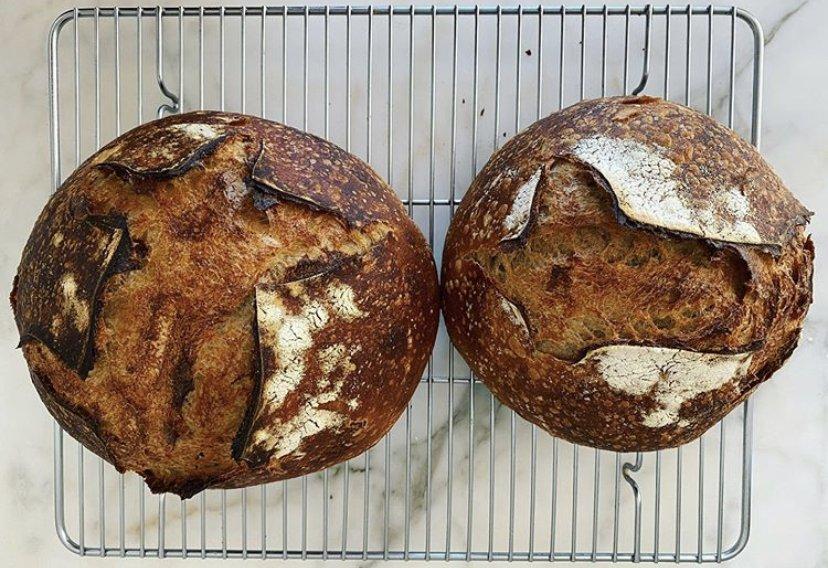 As the smell wafts from the oven, senior Grace Lindstrom’s mouth begins to water. She waits with anticipation as the timer counts down. Three. Two. One. As she opens the oven door to reveal her crisp, fresh, golden sourdough loaf of bread, a smile spreads across her face.

If you were to ask her a year ago about baking bread, she’d have looked at you like you were crazy. Now, it’s all she thinks about.

Many students have begun baking sourdough bread during the pandemic. With the extra free time and the unusual absence of summer plans, these students spent more time with their sourdough starter in the kitchen then they would have ever predicted.

Senior Dean Hall took up baking sourdough during quarantine as an opportunity to expand on his love for cooking and bond with his family. Hall said he and his dad had always been interested in baking bread but never had the time to do it together.

“Over the summer my dad and I would make maybe a loaf of bread each week, some weeks more, some weeks less,” Hall said. “Since school has started, I have been unable to get back into the game but cautiously stalking any opportunity I have to return.”

Lindstrom got into baking sourdough because of her prior experience with cooking but also gained useful starter knowledge through her AP Biology class as a junior.

“I’ve always enjoyed baking and cooking, but fermenting things was kind of a whole new category of creating food that I never really looked into before,” Lindstrom said. “I learned about fermentation in AP Bio last year, and it was very interesting to me, so I decided I wanted to try it.”

Both Hall and Lindstrom say they still have a long way to go in their sourdough journeys.

“From the get-go, I had very high standards of where I wanted my sourdough to be at the end of this experiment, and I am sad to say I have not met them yet,” Hall said. “The best bakers in the world are constantly changing their recipes trying to make a better gluten stretch or fluffier dough. Only being a couple of months into the process, I can say I make a good loaf,  but I have a long way to go to reach perfection.”

Lindstrom said she is also always trying to make a better loaf of bread.

“I’m constantly tweaking the ratio of flour and water I’m using,” Lindstrom said. “Baking is a never-ending process, and there is no end goal. That’s something I always keep in mind. I don’t think I’ll ever be able to make the perfect loaf of sourdough or the perfect croissant, but I think I can perfect it to the way I like it, and the way my family likes it.”

The process is also therapeutic for her.

“I’d probably say the best part of baking sourdough is feeding my starter every night,” Lindstrom said. “I do it right before I go to bed after the house is all quiet and everyone is in their own rooms. It just forces me to just focus. It’s very peaceful and rhythmic. While I’m doing it, I don’t listen to music or watch TV. I just focus on this one thing. It’s a really nice way to end the day. You have to be very conscious about your measurements, the temperature of the kitchen. There’s a lot you have to be conscious of. I find that very therapeutic because it forces me to think about something other than the hard math test I took or the college application that I have to get done. When I make sourdough I’m definitely at peace.”

Both Hall and Lindstrom are eager to grow as sourdough bakers.

Hall said, “I have learned that you must be as patient as Master Oogway from ‘Kung Fu Panda’ to truly respect the art of breadmaking, and you must also be as wise to know when and where you faulted as to not make the same mistake in the next batch.”