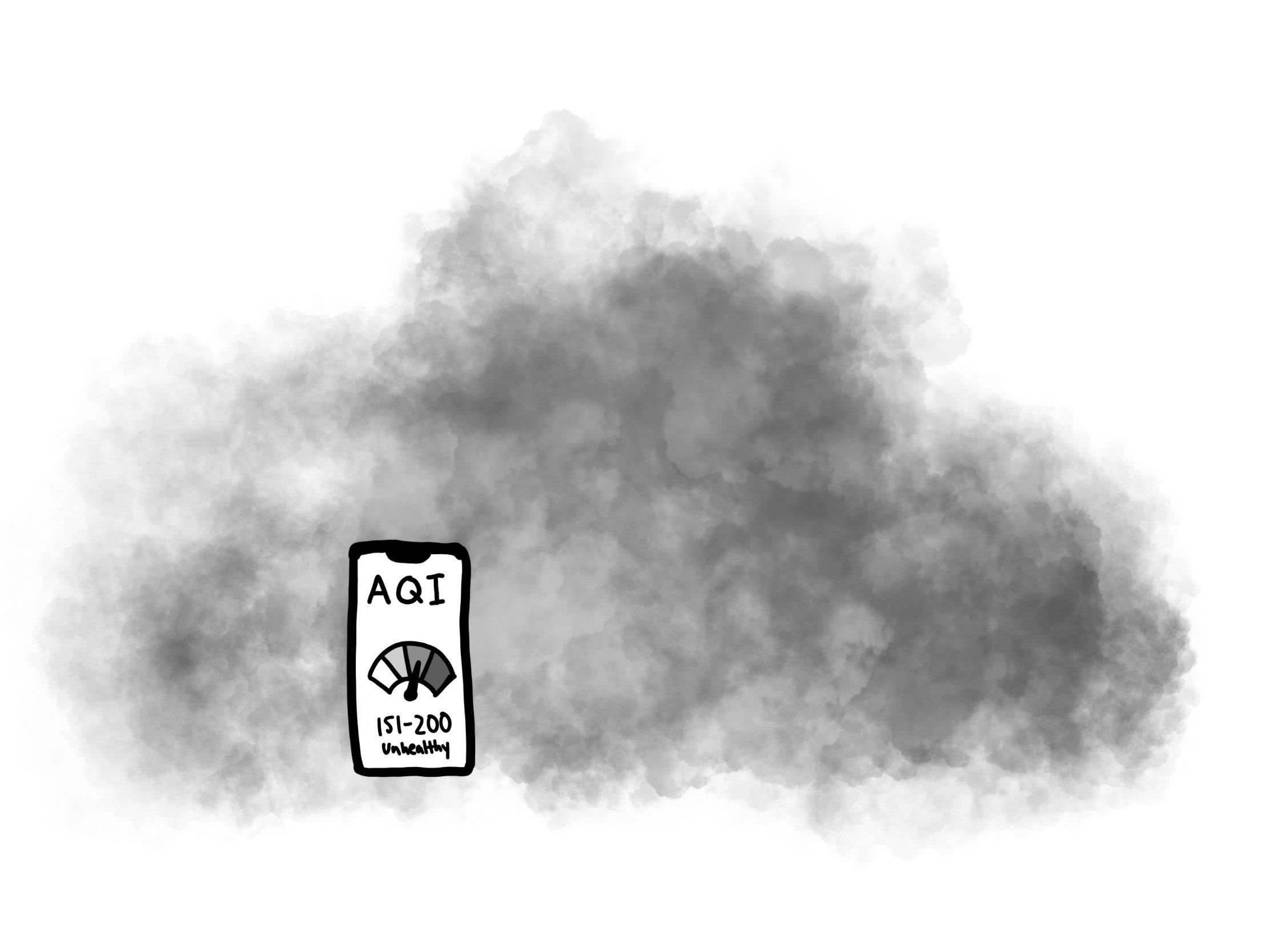 At the end of a typical school day, junior Ziv Weissman would normally head to water polo practice. In the latter half of September, however, many of Weissman’s practices, as well as other sports practices, were called off due to bad air quality.

“I definitely, during 7th period, will always be checking the air quality,” Weissman said. “When it was really bad, it was pretty worrying.” For many students like Weissman, it is becoming increasingly clear air quality is affecting their daily lives.

As smoke from ongoing wildfires drifts over California, parts of the state are experiencing extremely poor air quality, and many residents have been driven even further to stay in their homes. With the smoke affecting the so many people, being aware of how to interpret air quality measurements can help prevent its harmful effects.

Air quality measurements describe the level of pollution in the atmosphere at a given time. In the US, this is typically measured using the air quality index, which rates the air’s concentration of five types of typically harmful particles, on a scale from one to 500.

The index is split into six colored tiers, ranging from “good,” which is below 51 AQI, to”‘hazardous,” which is above 300. The Environmental Protection Agency describes a safe level of pollution as below 100 AQI.

“One of the main substances that’s measured are PM 2.5 particles, which are small enough to get into your lungs,” Loomis said. “Anything attached to them can get into your bloodstream.”

PM 2.5 refers to particulate matter measuring 2.5 microns or less in width. These particles can be as small as 1/30 the width of a human hair and can attach themselves to toxins which can lead to serious, permanent health problems.

Wildfires drastically increase the likelihood of breathing in these particles. EPA data shows the concentration of PM 2.5 particles in California in the month of September was 2 to 5 times that of normal air.

These toxins often come directly from the source of the fires.

“It’s not just trees burning down,” Loomis said. “When a house gets burned down, think of everything that gets burned down with it. You’re burning insulation, piping and all the structural elements. That’s what really causes problems.”

A Stanford study conducted by Dr. Mary Prunicki and Dr. Kari Nadeau showed that wildfire smoke leads to a 40% increased rate of heart attacks and strokes in people over 65, while doubling the rate of asthma in children.

Paly athletes in particular have expressed concerns surrounding the danger of practicing on days with high air quality. According to Weissman, some athletes have had to make a decision between staying healthy and going to practice. “If you go to practice, you’re exposing yourself to all the smoke, but  if you don’t, you might be falling behind,” Weissman said.

These health concerns are reflective of problems athletes have faced due to smoky air. According to both Weissman and Paly Field Hockey Coach Jenny Crane, practices have become more difficult for students. “At one practice, I had a few girls come up to me saying (that they were) having trouble breathing,” Crane said. “It can definitely make exercises harder.” Weismann noted a similar experience, stating that he and his teammates had some additional trouble in practices.

In order to ensure students’ safety, Paly’s Athletic Department has stated that sports will be cancelled on days with air quality higher than 150.

Recommended courses of action to protect from wildfire smoke overlap significantly with those of the ongoing COVID-19 pandemic, including staying indoors and wearing masks while outside.

According to Vienna Liu of the Public Health Club, determining one’s own levels of risk is important. “Everyone should be aware of their own personal health,” Liu said. “Especially if you know you have other health conditions, you should be thinking about how you’re affected by things like this.”

Loomis said this spike in air pollution is not unique to 2020. She said it is likely to resurface, as widespread wildfires are sure to be a recurring annual event.

“We saw the same rise in Air quality a few years ago, when everyone had their masks and filters.” Loomis said. “We’ll definitely see this again with forest fires in the future.”