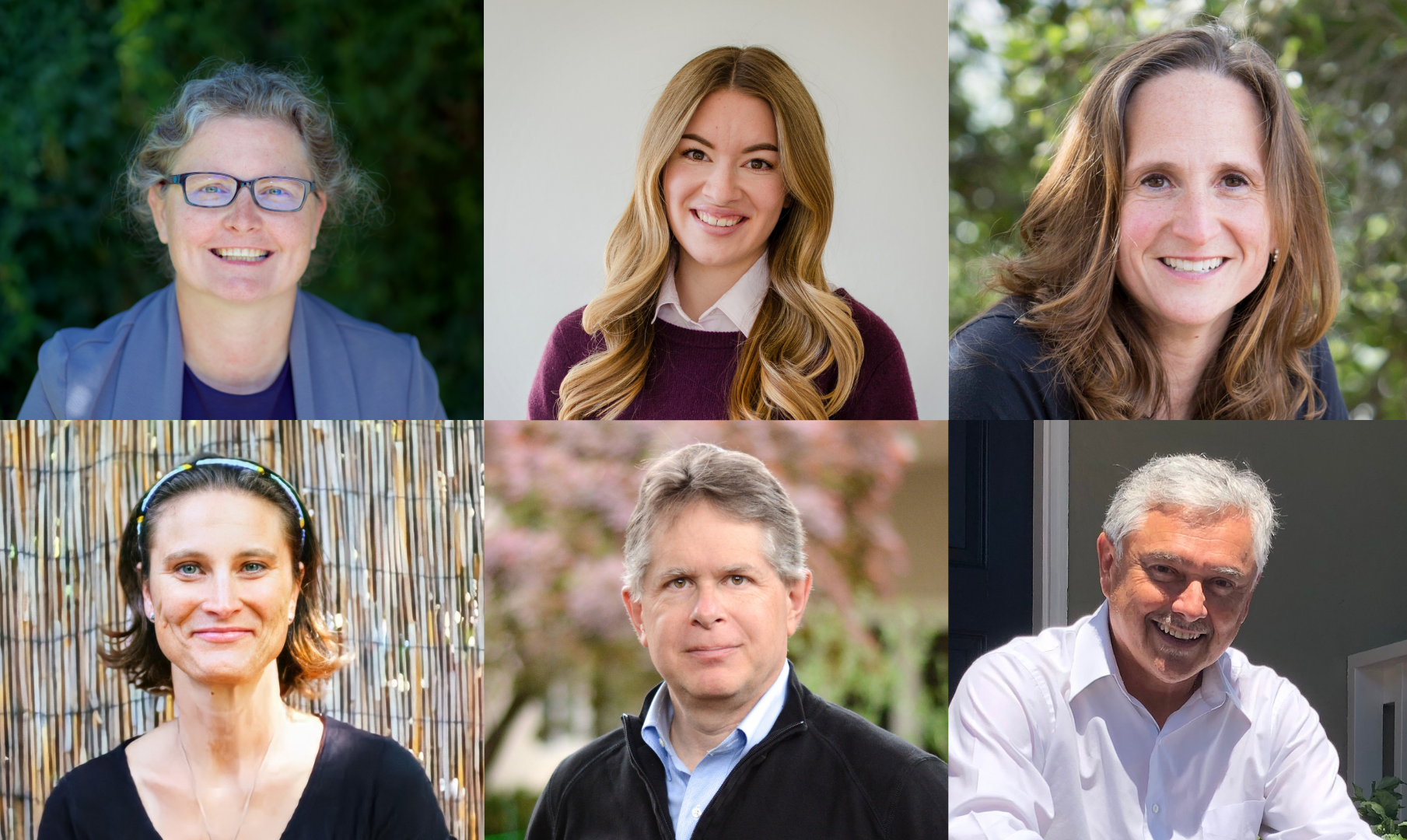 Katie Causey is a 2012 Palo Alto High School graduate and nonprofit employee who is running on the platforms of student voices, equity and the physical and mental wellbeing of students which she said was magnified following the string of student suicides.

“I am running because I know what it is like to walk into your classroom at age 14 to find your classmate is gone, and then the next month another, and then the next month another,” Causey said. “Our community was in crisis then and it is now. In a time where everything is unpredictable, I am running to prioritize what we can control –– ensuring families have resources, are supported, and are not alone.”

Since she was a teenager, Causey said she has been a longtime community volunteer, a chair within the Fund Development Council of the Junior League of San Francisco, and a fundraiser for community organizations like the Palo Alto Recreation Foundation and League of Women Voters.

“I bring a network of community resources and nonprofits that will help us lead with a community-based, collaborative approach, highlighting every avenue of support,” Causey said.

She has a degree in women’s studies from George Washington University where she focused on intersectional solutions in communities and schools, often applying her studies to Palo Alto Unified School District for her research on race, class, gender, orientation and ability.

Causey identifies as bisexual and is the first openly LGBTQ+ candidate to run for a seat on PAUSD’s board.

“This year can be an amazing opportunity to show students PAUSD’s commitment to civics –– to amplify the voices of our students who are organizing and assisting their community during this time to create innovative solutions and show them they can be the next civic leaders,” Causey said.

Causey hopes to promote a curriculum that encompasses well being –– whether social and emotional learning or understanding consent.

“(We need to ensure) that it’s strong, integrated, thorough, and that we’re listening to student and educator feedback to ensure it is as effective as possible,” Causey said.

Todd Collins is the president of the PAUSD board of education. As an incumbent, Collins said he is running in part due to COVID-19’s effect on education and how it calls for continuity in board leadership. He said he would advocate for helping low-income and minority students’ success, improving the district’s distance learning approach and building a stronger foundation in terms of data, people and culture.

“There are critical areas that will have a huge impact, both this year and in the coming years, on how we serve and support students,” Collins said. “These include: improving our (approach to) distance learning … based on student and family feedback, managing dramatic financial swings, including falling state and local revenue, and the risk of losing our parcel tax, working with our employee unions to make return to in-person school possible.”

Collins said he has a long history of service to PAUSD students and schools, previously serving as a Parent Teacher Association officer and a member of both the Bond Oversight and Enrollment Management Advisory Committees. All three of his children attended PAUSD schools.

“I believe this approach is fundamental for supporting every kind of student,” Collins said. “We need to be candid about learning loss and the impact of distance learning on our most high-need students –– we’ll likely see the achievement gap grow in the next year, and we’ll need to double down on our focus on shrinking it.”

Collins said PAUSD needs a stronger foundation in place –– one with people, organization, data systems and culture –– in order to progress on the issues the community cares about.

“Making long-term change in an organization like PAUSD takes time –– one problem we’ve had in the past is that we lose patience with initiatives too quickly and move on to something else,” Collins said. “It takes years for important initiatives to take hold and show results. There are no silver bullets. We need to continue our focus to make sure we get the results we care about –– better experiences and outcomes for all students.”

“My long term number one has always been the systemic inequities that student demographics are very predictive of how much success you’ll find in our district,” DiBrienza said.

DiBrienza hopes to provide experienced leadership as the district faces the challenge of the novel Coronavirus and the future budget cuts that may lie ahead.

“I’m excited, now that we’re starting to make progress, to really stick it out (with the current superintendent),” DiBrienza said. “And now with COVID, (there are) so many challenges in front of us with reaching our students and being supportive in all the ways they need. And with budget issues that are probably in front of us, we need to be making sure that some experienced leadership is there to help guide us.”

DiBrienza has a PhD in math education from Stanford and was an elementary classroom teacher and provided staff development for grades K-8. She now consults for school districts both nationally and internationally.

“My oldest is a Paly 10th grader,” she said.“And my youngest is in elementary school in fourth grade so I am experienced in the district. I’m invested in the future.”

DiBrienza said she is also focused on providing support for underrepresented and disadvantaged students who are having difficulties navigating distance learning.

“The number one issue now is really helping make sure we manage through COVID,” DiBrienza said. “That as students (remain at) home, there aren’t equity issues that come up, there aren’t access issues that come up. And making sure that our students are able to engage in meaningful ways with their schoolwork or their home, while also making sure that they have the emotional support.”

During her time on board, DiBrienza said she is particularly proud of the renaming of two PAUSD schools named after eugenists, its increased communication with adjacent school districts and its passing of a resolution for increased dyslexia intervention and support.

Jesse Ladomirak is a PAUSD parent of four, General Manager and Chief Financial Officer of the remodeling company Teevan and was a public agency attorney. She said she’s running to represent all families with her priorities being mental wellness, educational equity and principled budgeting.

Ladomirak said having only one current board member who has children in PAUSD is a source of disconnect between parents with school-aged children and the board.

Given her experience in management and budgeting, Ladormiak said she has an understanding of the complex interplay between mission budget personnel, risk analysis and its connection to the culture and climate of PAUSD.

“Budgets are a quantification of priorities,” Ladomirak said. “You can say something’s a priority, but if you’re not spending money on it in an effective way, it’s not really a priority. I will see it as my responsibility to make sure that the things we’re prioritizing are backed up with funding and that the funding is actually producing value.”

Ladmoriak plans to amplify student and parent voices, particularly through task forces and surveys on mental wellness and educational equity to better identify issues and work towards potential solutions.

“There’s a lot of concerning information that came out of surveys that were taken in the spring that students, particularly secondary school students, don’t feel a lot of self-efficacy,” Ladomirak said. “What I really would like to do is set up a series of student task forces because I feel like students have so much wisdom to give us. We don’t have systems in place right now (to access) that wisdom.”

Ladomirak said she was particularly shocked at the results of the latest California Healthy Kids survey that showed a considerably high amount of secondary students had made a suicide plan in the previous 12 months.

“In the term of a board member — four years — I would consider myself successful if, at the end of that four years, we’ve seen some market improvement in the mental wellness metrics and the opportunity gap,” Ladomirak said.

Nagle has been a management negotiator for six years and is an elected union representative. He said he is running to champion educational equity and provide stronger support and resources for low-income, minority students.

“It is a focal (interest) of mine that is made worse by the COVID crisis,” Nagle said. “My son is a Mexican American kid. I’m actually Mexican American, but his friends are all Black, indigenous, people of color and they’re struggling … Our BIPOC students are not enjoying the same success as our other students.”

Nagle said he is concerned about diversity and underrepresentation of people of color on the board, specifically in Palo Alto where the majority of elected officials are white.

“You will notice there are no people of color candidates,” Nagle said. “It’s all white again. I’ve heard some, ‘Yes, we need more people of color,’ this and that kind of thing. But I don’t see it happening. I’m going to be your only Mexican-American candidate in 30 years.”

“I’ll be even a bigger proponent of equitable hiring practices,” Nagle said. “And I hope that’s something that, after four years, I can say that I really moved the needle on is that we really recruited and developed within our own teaching ranks, future leaders of color that are woefully missing in Palo Alto.”

Nagle is also calling for more transparency when someone within the district gets COVID-19.

“We ask to have a community conversation led by the board in public of when we want to come back to school and what that’s going to be,” Nagle said. “Will we let county health experts decide when it is going to be safe enough to return to school? What’s our move when students and staff begin to get COVID? That is the fundamental question.”

Karna Nisewaner is a PAUSD parent of two, Palo Alto Community Child Care director at large and former chair, and the Vice President and Deputy General Counsel at Cadence Design Systems, Inc. She said she’s running for the board in light of distance learning’s effect on children’s education and to strengthen the city’s relationship with PAUSD.

“What prompted me to run was my initial feelings as the parent of two elementary kids and how the school district initially responded to the COVID pandemic situation,” Nisewaner said. “The spring was very, very difficult for elementary parents, particularly working parents who could not have (a spouse devoted to) full-time to educating their children.”

Nisewaner said she felt as though the district could have implemented live instruction in the spring rather than going asynchronous for an extended period of time.

“I know many people who have quit their jobs or have scaled back their work,” Nisewaner said. “And to me, not understanding or not doing anything to alleviate this pressure or just expecting all parents to become teachers was just not realistic.”

Nisewaner said her experience as a lawyer is valuable because her job encompasses contracting teams through inbound and outbound contracts, litigation, employment and intellectual property.

Nisewaner said she will strengthen the relationship between the school board and city council, citing her experience as a board of director at PACCC and as a lawyer. This relationship was recently strained when the city terminated its $5 million lease for the Cubberley Community Center from the school district in order to save money this fiscal year.

“Dealing with all of the complexities of that relationship just really made me feel like, given my experience as a lawyer and the functions that I run and given my experience, I could be a good person on the board to help make sure that the policies are being implemented in a smart way, that questions are being asked about, ‘Why we are doing this?’” Nisewaner said.