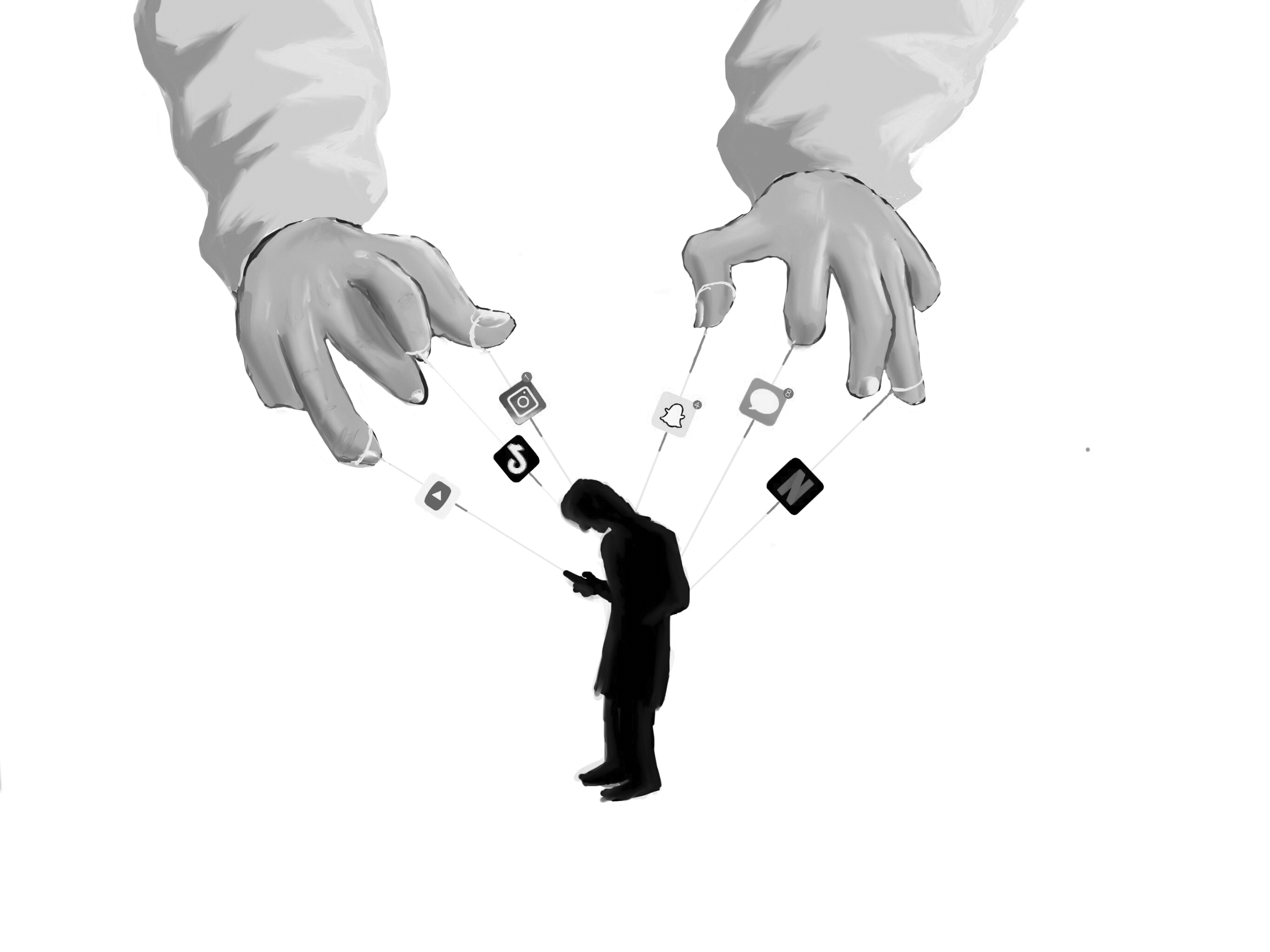 Senior James Fetter arrived home from swim practice two years ago in shock. An entire film crew was set up in his house. What Fetter didn’t know at the time is that the crew was there to interview him, his sister and his mom for the now-viral Netflix documentary “The Social Dilemma.”

The film, which calls social media and Silicon Valley a coexisting ecosystem of utopia and dystopia, made the Top 10 U.S. Today leaderboard on Netflix and debuted on Sept. 9. It features clips of Fetter and his sister checking their average daily screen time and social media use.

The film features former employees of Facebook, Instagram, Pinterest and other social media platforms. These former insiders explain how social media apps are intentionally designed and programmed to tether users to the screen to generate advertising revenue for the companies. The film argues that a business model of employing human data overrides the foundations on which capitalism was built.

Senior Timothy Hung said the film made him think a lot about what goes on behind the scenes with the creators of the apps.

“After watching the film, I was faced with the truth that these social media apps, while made for us, have their own agendas that often conflict with our well-being,” Hung said.

According to the co-inventor of the like button Justen Rosenstein, the likes, mentions and memories weren’t designed for the user interface. Instead, these features were designed to manipulate human psychology, keeping users engaged and scrolling.

“When real life gets kind of gray or boring, which happens especially when I can’t see people like in recent times, I find myself relying on social media for escapism,” Hung said.

After seeing the film, Hung said that he began to notice his own social media habits.

“I don’t use the main social media apps as much like Instagram or Snapchat, but I still have accounts,” Hung said. “I don’t feel the draw as much because I never formed the habit, and after seeing this film, I don’t plan on it either. I’m on YouTube a lot, and sometimes I feel like I’m just wandering around on the site when I have nothing to do. It’s true that it is a big time-waster, but I keep on coming back because I occasionally find very rewarding stuff on there, and I personally think the film glossed over this.”

Fetter’s mom, Stanford Psychology professor Anna Lembke, was also featured in the film, discussing the role of technology and media in her family.

“We were off the grid for many years when our kids were little,” Lembke said. “No smartphones. No computers. Not even WiFi was connected to our house. Then when our eldest (Mary Fetter) started high school at Paly, she came home and claimed she couldn’t function as a student without a laptop and WiFi to the house. It was true.”

Lembke said it got to the point where Mary came home saying she couldn’t function as a well-adjusted teenager without a phone. After incorporating technology into their household, Lembke said she fought hard to limit the amount of screentime in her family.

“No screens on Sunday,” Lembke said about her family rules. “No screens after 8 p.m. No screens on our technology-free vacation. No more than two hours a day of recreational use.”

Lembke said that the film was effective in presenting a universal, complex issue in a relatable way.

“It has helped get the message out that these devices and algorithms are engineered to get us hooked and keep us hooked, at huge costs to individuals and society,” Lembke said.

The docudrama intertwines talking heads with a portrayal of a fictional family wrangling their scrolling demons. The fictional mother tries regulating screen time. The fictional daughter is trapped in her Snapchat filters. The fictional son is manipulated by the A.I. behind his phone screen.

“I didn’t find that narrative particularly impactful,” Hung said. “While it did entertain me a great deal, I think because of the way the story was told, it just didn’t have the same punch as the real people and experts telling us their own stories and truths in their own words.”

While Hung said that the film included unnecessary portions of the story, he has found himself positively impacted by the messages of the film.

“Because of the film, I have found myself fighting the urge to scroll,” Hung said. “While the real danger lies on a wider societal level, the possibility of addiction and mental health effects exists for all of us.”