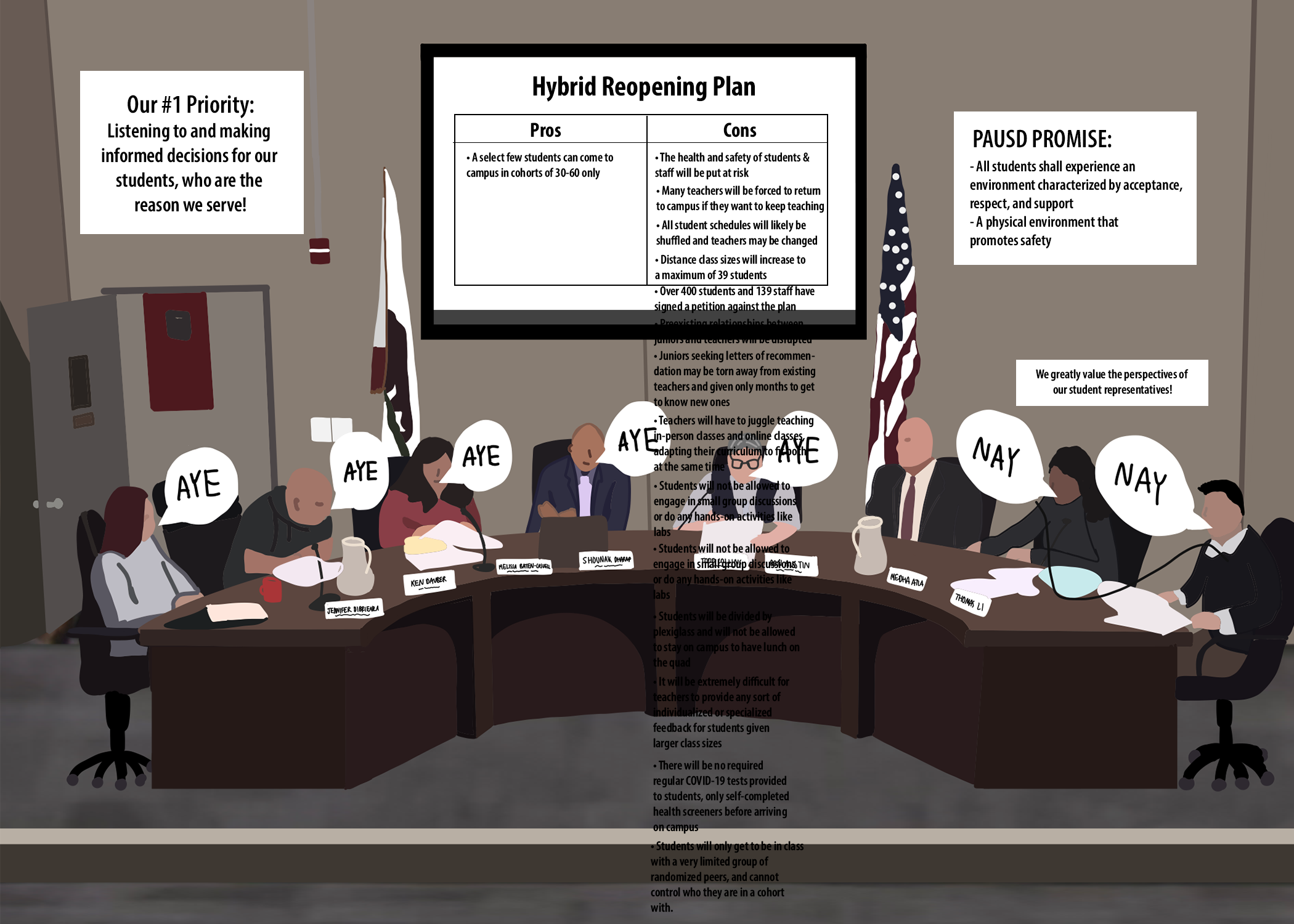 Reopening plan should have been more transparent, involved more stakeholders

As COVID-19 cases rise to record highs, the Palo Alto Unified School District board has approved a now-defunct plan for secondary students to voluntarily return to campus starting Jan. 7.

After a grueling hour of teachers, parents and students speaking out against the plan at the Nov. 10 school board meeting, the two student board representatives, Paly senior Medha Atla and Gunn senior Thomas Li, were the only board members to vote no (preferentially) on the plan.

The Campanile believes the district should have involved teachers earlier and more extensively in the process of creating the hybrid plan, and urges the board and the district to consider whether the plan truly benefits and protects the health and safety of the majority of students — as it stands, The Campanile does not think it does.

The first priorities of the district ought to be to protect the safety of teachers and students. Yet English and History/social science teachers, many of whom are in high risk groups for severe illness if they contract COVID-19, would have essentially been forced to return to campuses if they wanted to continue to teach, while a necessary shuffling of schedules would have torn apart preexisting classroom communities that already took months to build over Zoom.

Regardless of whether students chose distance or hybrid learning, the district made it clear that class schedules and teachers were going to change for every student, with few to no exceptions. Distance class sizes were going to increase, reaching a maximum of 39 — an increase many teachers said would make individualized feedback and the development of trusting relationships more difficult. Juniors who have established these relationships with teachers they hope to receive letters of recommendation from would have had to change their plans entirely, starting over with a new set of teachers.

Further, free-flowing collaboration and hands-on activities, arguably some of the only things severely lacking in distance learning for the majority of students, would still have been impossible to do in person under proper social distancing guidelines. The benefits of returning to campus, especially for English and History/social science classes, were few to none.

Beyond speaking at board meetings, many community members have come together against the plan. Juniors Kabir Bhatia, Madison Abbassi, Matthew Cao and Jeffrey Tu wrote an open letter to the board expressing their disapproval of the plan, citing concerns about the safety of faculty and families, schedule and course disruptions, inadequate support for student needs and lack of teacher and staff choice. The petition has been signed by 689 people, including 376 students and 139 district staff members.

Staff members have also come out against the plan with a similar letter, claiming facts surrounding the involvement of staff were misrepresented, that the plan exacerbates inequity and does a disservice to students and a lack of clarity around why the district decided to move forward with this plan in particular.

“Educators were not consulted; we were given a directive,” the letter read. “We were only included after key reopening decisions had been made.”

The letter was signed by 34 Gunn teachers, then echoed by 78 Paly teachers who signed a letter of support for the original.

The reopening plan as it stands is deeply flawed: it will inevitably disrupt students’ schedules, rip apart their existing connections with classmates and teachers, and put their health at risk. In the future, The Campanile urges the district to involve teachers in decisions that will impact them directly before decisions are made.