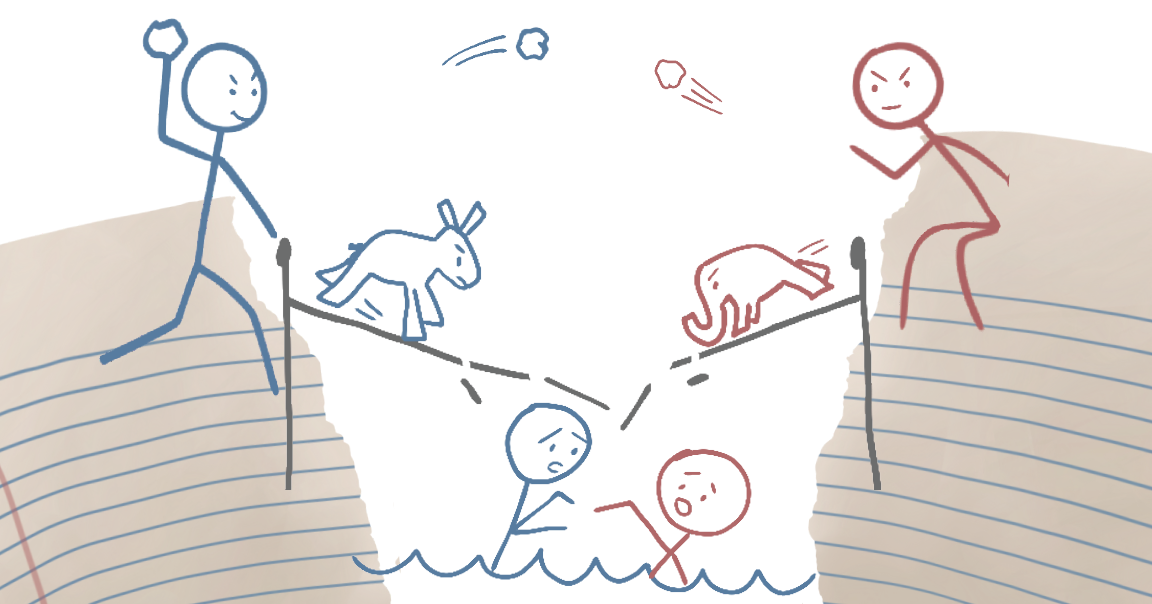 When reminiscing about the days before online school, some students recall the typical classroom setting as a place where collaboration and educational, respectful conversations occurred.

But for senior Jackson Bundy, the days where his class periods ended with frustrated peers glaring in his direction after an aggressive dispute over political views live vividly in his memory. In a Campanile survey measuring student political views, only 5 out of the 145 students who answered the question said they supported President Donald Trump, while 140 said they supported President-elect Joe Biden. As a student who tends to lean toward the conservative side of the political spectrum and supports Trump, Bundy said he often feels ostracized for his views among the many liberal voices at Paly.

“I’ve had classes where I was told that I wasn’t allowed to state my viewpoints because I was conservative, which is frustrating,” Bundy said. “But I also realized that it was probably going to happen eventually. I don’t know if I’ve ever been in a class with more than three conservatives, including myself, but it’s kind of just something I’ve learned to deal with.”

Bundy isn’t the only student struggling with his political identity in the classroom. Sophomore Kyle Lee said he feels uncomfortable having right-leaning beliefs in a heavily liberal school. He said some of his closest friends cut off contact with him because of his political views and that he believes some of his teachers treat him differently because of these views.

“I have a teacher who hates me because I’m conservative,” Lee said. “I know she does because I turn in the same worksheet, and I worked with all my friends on it. Even though they’re different answers, they’re basically the same idea, but she’s giving me way lower scores on my (worksheet).”

Lee said he is open to civil discussions, he said he is frustrated that others don’t take his opinions seriously.

“They will say I’m wrong, and they will not say anything (else),” Lee said. “They will not make any proof, they will say Trump’s a racist … it’s the same thing over and over again. I will debunk it and I will say, ‘Do you have any other points?’ I have a 34-ish page document of debunking everything that people have claimed. People say, ‘You’re uneducated. You’re stupid. You don’t know what you’re talking about.’ I do my research, I know what I’m talking about.”

In spite of some of Bundy’s negative experiences with political differences, he said one of his close friends is a passionate leftist, and they frequently have hour-long conversations about politics to help each other understand the opposing side’s perspective.

“Our viewpoints are never aligned,” Bundy said. “It’s really interesting because we’ll have political discussions a lot, but we’re never like, ‘Oh, you’re an idiot. I can’t believe you think this,’ it’s usually more like, ‘That makes sense, and I see where you’re coming from, but I disagree.’ I can have discussions like this, but I’ve also had discussions where I’m the only conservative, and it’s just six people yelling at me that I’m wrong.”

Since AP officially called the election in Joe Biden’s favor on Nov. 7, Bundy said his peers have been generally respectful towards his support for the incumbent President Donald Trump.

“For the most part, (conversations) have been civil, with the occasional argument getting heated,” Bundy said. “I’ve definitely heard some comments that I wasn’t supposed to hear, but they haven’t affected me at all.”

Like Bundy, freshman Anna Van Riesen said she has no problem listening to people whose opinions may differ from hers and is willing to agree to disagree with them. However, she said the definition of an opinion is debatable.

“If your opinion is that someone should not get their civil rights, then that’s not an opinion –– it’s oppression,” Van Riesen said.

Van Riesen said she thinks people being able to have conversations about different topics regardless of where they stand is valuable.

“I think that it’s always important to listen to what other people have to say as long as they’re willing to have a conversation,” Van Riesen said. “Just being able to talk with one another without automatically cutting someone off is really important for depolarizing the political situation.”

As a product of two parents with opposing views, sophomore Evie Barclay said she has come to learn the importance of hearing out both sides of the argument.

“I’m having conversations at home that I wish I was having in school,” Barclay said. “It’s really disheartening to see this amount of contempt and extremism from both sides when the reality is, most people fall somewhere in the middle of the spectrum.”

Because of her background, Barclay said a lot of progress needs to be made in terms of how people should treat others with opposing political views.

“There’s a unique political toxicity in our area, and I believe as a school and as a

community, we can do a better job of including all students and treating all students with respect,” Barclay said. “I’ve had people tell me they feel like they can’t voice their opinion, even though others may actually agree on some things with them but just choose not to listen.”

She also said she does not choose friends based on political ideology.

“If I lose respect for anybody, or lose the desire to be friends with them, it’s not because of their political opinions. It’s because of the way they treat and perceive people,” Barclay said. “It’s actions, not words, that I base my friendships on.”

Barclay said she encourages others to discover the value of sparking healthy, respectful conversations with others regardless of whether or not they agree.

Barclay said, “it’s worth listening to people who have different opinions and opening up discussion, even when it gets a little uncomfortable.”