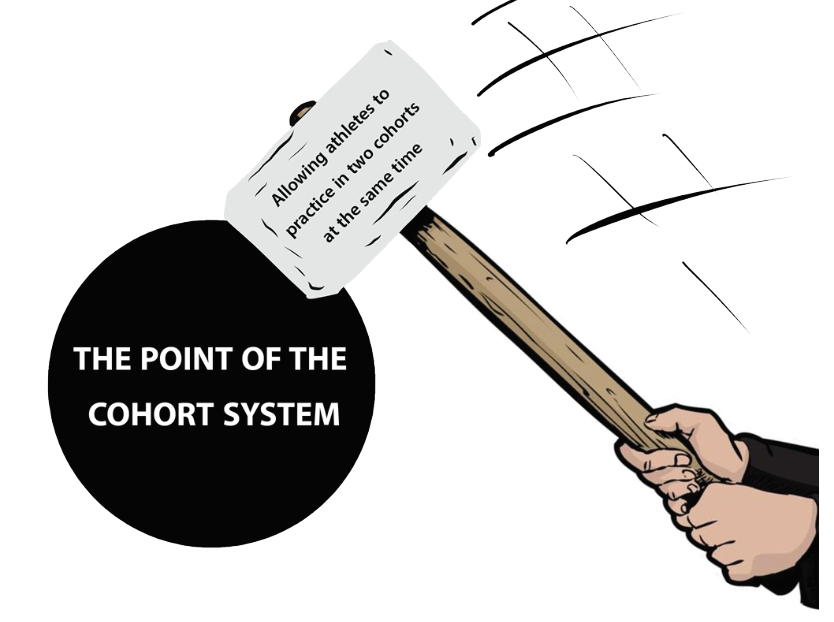 Athletes should not be allowed in two cohorts simultaneously

Athletics are starting up after a seemingly endless wait, with the low-contact Season 1 sports in full swing. Three weeks ago, Santa Clara County health officials announced a wave of changes relaxing guidelines around youth sports, including approving indoor sports, allowing for cross-team competitions and letting athletes compete in two sports or cohorts simultaneously.

Allowing an athlete to be in two cohorts at once creates the possibility of a single athlete infecting hundreds of others and greatly increases the chances of a campus-wide athlete quarantine.

For this reason, The Campanile thinks Paly should not adopt the two-cohort rule and student athletes should be limited to one cohort a season to minimize the risk of COVID-19 infection.

The risk to athletes, and their close contacts, is further compounded by a lack of infrastructure surrounding prompt quarantining following positive COVID-19 tests. Just last month, Paly swimmers showed up to practice hours after a team member publicly communicated that they tested positive; even though that test later proved to be a false positive, administration still failed to halt practices and communicate the test results to the whole team.

The purpose of the cohort system is to manage the impact of a positive test: if a student is only interacting with one predetermined group of their peers, only that group gets exposed to the virus if that student were to test positive. This allows every other group on campus to continue as normal, since the infected student would theoretically have not interacted with students in other cohorts.

Allowing student athletes to practice and compete in two sports at once inherently conflicts with this safety protocol. Given that there are six Paly-sanctioned sports in Season 1, there are 15 possible combinations of school sports an athlete can participate in, not to mention the dozens of club teams operating in the Bay Area.

Under the two-cohort system, a single positive test would likely cause a ripple effect that could easily result in multiple, if not every team on campus having to quarantine, halting practices and severely impacting multiple teams’ seasons.

Using a single cohort system would limit the impact of an athlete testing positive to the 15 other athletes in their cohort only.

Further, given the absence of an efficient quarantine plan in regards to Paly student athletes, allowing athletes to participate in two sports at the same time exacerbates the lack of structure surrounding COVID-19 exposure procedures, which are currently limited to district contact tracing.

Though allowing athletes to compete in two cohorts may open up more opportunities for college recruiting through increasing practice and game time, this benefit is far outweighed by the safety risk it poses.

Students are returning to campus, and the risk of infection within the student body is at its highest in months.

In the midst of all this, Paly should not allow students to participate in two sports simultaneously — not including preseason/postseason overlaps — for the foreseeable future, because it undermines the cohort system and puts the entire body of student athletes at Paly and in the broader community at significantly higher risk.