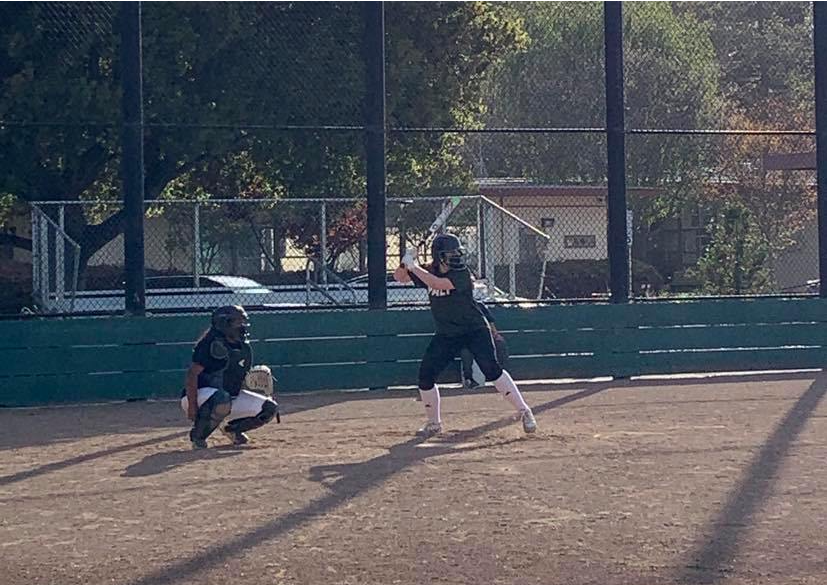 “It had been almost a full year since I last played softball, so I was really excited to see all of my teammates and finally play,” Sahota said.

The announcement of the reopening of sports came alongside specific COVID-19 safety guidelines, play and practice restrictions and extensive color-coding of sports.

The California Department of Public Health requires physical distancing of players, hygiene and equipment sanitation and face coverings by players, coaches and bystanders. Additional requirements depend on the sport and the tier it can be played in.

At Paly, water polo and football — both high contact sports according to the CDPH — are the only sports where athletes are required to get COVID-19 tested regularly based on these guidelines. But because Santa Clara County is in the red tier as of publication, testing is not mandated Athletic Director Nelson Gifford said.

“For the past two weeks, Santa Clara County has had an adjusted case count around six per 100,000,” Gifford said. “As a result, we don’t have to do testing for those sports.”

However, in the case that the county is pushed back into the purple tier, Gifford said Paly is prepared to offer COVID-19 testing for student athletes.

“We have testing mechanisms set in place to ensure the safety of all athletes,” he said.

With all the different, constantly changing regulations, varsity softball coach Marquisa Hawkins said she initially felt overwhelmed, especially in the enforcement of cohorts.

“It was very difficult to manage the different cohorts,” Hawkins said. “Keeping track of who’s in Cohort 1 and Cohort 2 made it challenging to do certain drills. Also, not knowing if everyone could intermingle and splitting people up in their respective cohort was hard to do.”

While outdoor sports have resumed, the California Interscholastic Federation Central Coast Section playoffs — which many student athletes work toward competing in throughout their season — are still up in the air.

“The guidelines say you can’t travel more than one adjacent county,” CCS Board Manager David Grissom said. “We serve many counties in our division, so it’s impossible, given those guidelines, to have CCS championship events.”

The league consists of 16 counties and 150 schools, making it difficult to arrange and create CCS playoff brackets safely, Grissom said. In addition, other state-level restrictions such as the prohibition of tournaments make it almost impossible for CCS playoffs to occur this year, according to Grissom.

“That guideline, along with other guidelines such as not being allowed to play in a tournament structure would have to change if we were to have CCS playoffs this year,” Grissom said.

The CCS playoff picture is grim in California’s current situation, but Grissom said he is trying to remain positive.

“Let’s not close the door to playoffs until we’re required to do so,” Grissom said. “We will be patient and see what time brings us.”