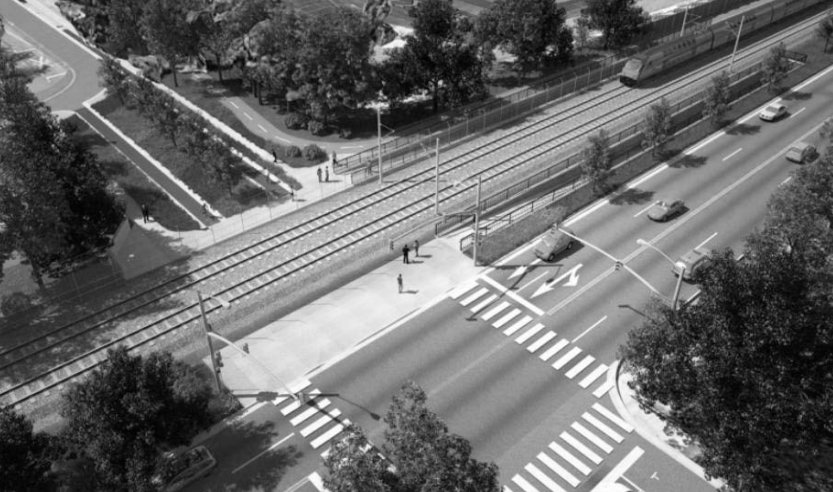 In response to the planned electrification of Caltrain, the Expanded Community Advisory Panel is recommending building an underground tunnel for bikes and pedestrians and closing Churchill Road at Alma Street to vehicles.

The panel, known as XCAP, is a group of nine Palo Alto residents who evaluate the information regarding grade separations –– when roads and railways cross at different heights –– and provide informed recommendations to the Palo Alto City Council.

After comparing three different closure options for the Churchill grade crossing, XCAP decided in a 6-3 vote to recommend Closure with Mitigations to the City Council. Closure with Mitigations would close the Churchill-Alma crossing to vehicular traffic while remaining open to bikes and pedestrians by way of a tunnel, and would include traffic mitigations designed by Los Angeles based traffic consultant Aecom that address the intersections on Embarcadero, Page Mill and Oregon Expressway.

“The idea is that in 10 years when these things get built, Caltrain will already be running a schedule, and it’s important to make sure that we have those grade separations,” XCAP chair and Palo Alto resident Nadia Naik said. “And, of course, for safety — because it’s really not great having everybody driving over the train tracks.”

Within the Closure with Mitigations proposal, two closure options exist that illustrate different models for an undercrossing. The first option would require individuals to cross Alma before entering the tunnel, while the second option has a tunnel running under both Alma and the train tracks. XCAP voted for the second option in a 7-0 vote with two abstentions.

“Imagine if 16 times between 5 and 6 p.m., the gates come down,” Naik said. “What ends up happening over time is that the traffic signal and the train — which has what is called preemption — gets to go first, and the cars have to wait. But when you do that so often, at some point the cars are not going to be able to go through, and backups will be so bad that we’ll get gridlock.”

According to XCAP’s final report, the majority opinion voted for Closure with Mitigations because they saw it as the cheapest and least destructive option. The minority opinion, which included Naik, is concerned the mitigations won’t be adequate after closing the Churchill intersection.

“There are still other things in question,” Naik said. “If we’re going to be building something that’s going to survive for 100 years, we really need to look carefully because these are also incredibly expensive.”

XCAP’s recommendation has resulted in both positive and negative reactions from the community. Junior Isabella Jones supports XCAP’s proposal, despite driving over the train tracks at Churchill two to four times a day.

“I don’t think it would affect (my drive to school) at all,” Jones said. “I think it’s pretty beneficial because it’s really dangerous for the bikers at the moment.”

Jones said the addition of a tunnel for bikers and pedestrians will make everyone’s commute to school safer because cars currently have to weave through the bike masses crossing Alma on Churchill every morning and afternoon.

Principal Brent Kline, though, does not support XCAP’s recommendation because he said it lowers the number of access points to Paly. He said there should be a way for the Churchill grade crossing to remain open to cars.

“Closing Churchill will increase the traffic flow on Embarcadero and give us just one road for us to get in and out of (Paly), except for on El Camino,” Kline said. “I think it has a bigger impact than they realize.”

Kline also said the Paly community should have a voice in the planning of the grade crossing, considering it adjoins the campus. He fears the recommended changes even with the mitigations in place.

“Because it’s in close proximity to our school, it’s a great conversation to have with more students and even staff so that we can understand the impact and maybe provide some of our thinking,” Kline said.

In accordance with Kline’s statement, one of XCAP’s specific recommendations to the city council is to get formal feedback from Palo Alto Unified School District.

“They need to be involved,” Naik said. “As much as possible, it would be good for the school to be involved in designing it because we might have suggestions, but students will have other ideas that we, as non-student bike riders, may not have.”

Beyond the Paly community, Closure with Mitigations will also affect Southgate residents because of their proximity to the crossing. Southgate resident Susan Newman is against the closing of Churchill crossing and has vocalized her concerns by attending all the recent XCAP meetings. She also is part of an unofficial group of Palo Alto residents who are against the closure and have made lawn signs reading “Keep Churchill Open.”

“There are reasons from (inside) our local neighborhood and out,” Newman said. “In Southgate, if they close Churchill, I will have to reroute 95% of my trips out of the neighborhood because almost all of them go down Churchill and on to Alma.”

Newman said Southgate is a centrally located neighborhood that has a protected feel to it because there are only two points of entry. By prohibiting cars from crossing the train tracks at Churchill, Newman said the neighborhood experience is going to change.

“We have older folks who’ve been in Southgate for a long time, and as they retire, move out and pass away, you get this influx of young families,” Newman said. “There are people of all ages in the neighborhood which is nice, and we worry that the younger folks, who have their kids and their two jobs, are not going to want to live here because it’ll be too hard to get around and they won’t be able to, for example, get down to Walter Hays.”

Even though XCAP has already made its recommendation to the City Council, the proposal is still subject to change. Numerous people including engineers, architects, Palo Alto residents and Caltrain representatives will discuss the plans for the grade crossing’s future, and Naik said the final decision will take at least 10-15 years due to the multi-step process required for approval.

As residents of Palo Alto, Naik says now is the time to speak up if people have concerns about the proposal or want to support XCAP’s recommendations.