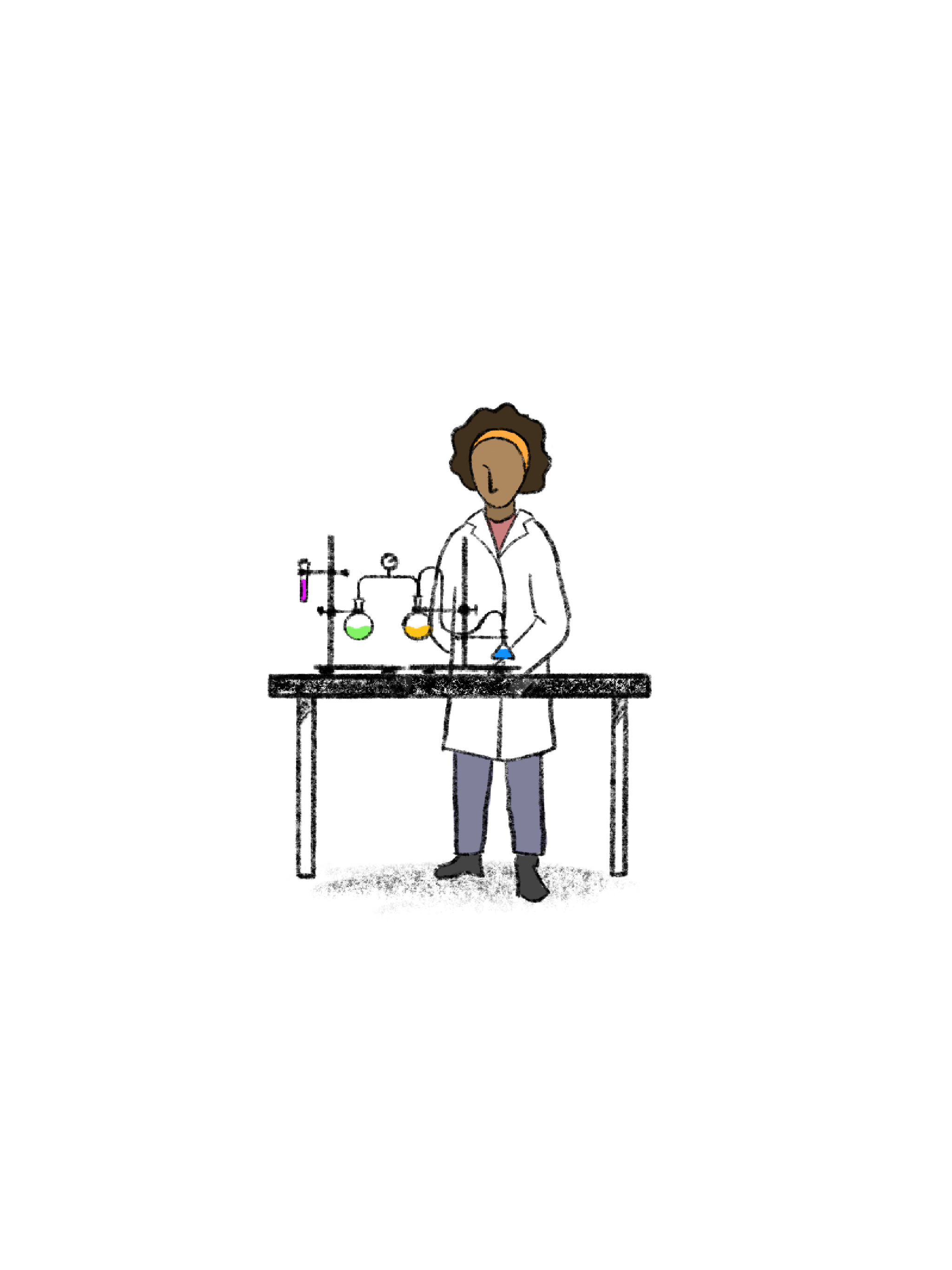 Roots of underrepresentation in STEM

As senior Noelle Burwell looks around her science class, she feels a sense of separation. Burwell, who is the co-president of the Black Scholars United Club, said she has seen first-hand the underrepresentation of women and some races in the STEM field.

“I don’t really see a lot of other students that look like me in a lot of the science classes that I have taken, which is really unfortunate,” Burwell said. “It does bring a sense of isolation — like who can I really connect with on a deeper level within my classes?”

While employment in the STEM field has increased by 79% since 1990, according to the Pew Research Center, many marginalized community members, namely women, African-Americans and Hispanics, continue to be underrepresented within it.

Black employees make up 9% of the STEM field in the United States, while Hispanics constitute a mere 7%. In comparison, Blacks and Hispanics compose 13.4% and 18% of the country’s population.

Burwell, who plans to enter the STEM field after graduating from college, and said she was inspired by her mother, who works in the field. However, Burwell said her exposure to STEM is an anomaly.

“I never really got any additional information about STEM (in school) — I just got it through my mom,” Burwell said. “But I personally don’t see a lot of resources specifically for people of color where they can learn about the STEM field, gauge their interest and eventually go into it.”

Meanwhile, Tiffany Grant King, the Global Program Manager for Diversity, Equity & Inclusion at HP Inc., said her interest in STEM started when she was 7 or 8 years old as a result of her family.

“My father grew up on a farm in South Carolina, so we had tractors, we had a lot of farm equipment, broken cars, and I was always with my dad tinkering, trying to figure out how things worked, so it just piqued my interest,” Grant King said. “I love problem-solving. I love overcoming obstacles and coming up with new creative ways to do things.”

Grant King said she decided to major in mechanical engineering at the University of Tennessee in Knoxville, where she joined the school’s National Society of Black Engineers chapter. In 2011 she started her own engineering education consulting business.

“I realized that though I wasn’t that far removed from my mentees, they weren’t getting the same level of exposure and awareness to what was happening around the world of STEM as I was,” Grant King said. “So I did some engineering projects on the side, but then I also got very involved in working very closely with our K-12 system here in the Bay Area.”

Grant King said she has also reached out to Paly and encouraged students to sign up for an NSBE virtual convention for high school and college students. King hopes the event, which took place on April 8 and 9, increased access to STEM-related information and helped bridge the gap in representation within the field.

Burwell said having more channels of information about STEM, like the NSBE virtual convention, could help combat the issue of the underrepresentation of minorities in the field.

“I think providing students, especially high school students who are getting to think about their future careers, with information about the STEM fields will allow for a lot more students of color to go into that field and make it a more representative career field,” Burwell said.

Sophomore Elena Brierley-Green, who is the co-president of the Socioeconomic Equality Club, said financial resources can also hinder people of color from joining the field.

“Underrepresented minorities such as African Americans and Hispanics oftentimes do not have the same resources and opportunities as those who are more privileged, so they may feel as if future careers in the STEM field are not realistic for them,” Brierley-Green said. “STEM is also an extremely demanding and competitive field, meaning that those who have the financial ability to receive more education and resources are at a significantly higher advantage (over) those who don’t.”

Burwell said the underrepresentation of people of color in the STEM field can also be attributed to preconceived notions about who belongs in the field.

“I think the STEM field is mainly seen as a field not for people of color because when people think about it, they don’t necessarily consider it could be mainly for African Americans or Hispanics,” Burwell said. “I think that’s something that may deter people of color from entering the field, because they feel like they don’t belong there or they aren’t represented by it.”

Burwell also said people of color are discriminated against even after they enter the field. The data backs her up: the Pew Research Center said 62% of Black people in STEM reported experiencing discrimination based on race.

“I’ve had many conversations with people in the STEM field that do experience certain microaggressions or aren’t necessarily treated like their other peers who are not people of color,” Burwell said.

“I’m a very optimistic person — no one can keep me from achieving something that I desire to achieve,” Grant King said. “So at the end of it all, you have to keep your goal at the front and don’t let anyone else keep you from it. Also, you have allies and support systems out there who care and will help you get to whatever you’re trying to achieve.”

And Burwell said the underrepresentation of people of color in the field has actually inspired her to pursue a STEM career.

“It turned into more of a push for me to go into the field, as opposed to a deterrent from entering it,” Burwell said. “I think I am really inspired to be in a place that I am not necessarily expected to be — I like the idea of going into the field and leading a path for other young women of color and setting a precedent or being inspirational to other people of color.”

Although women make up nearly half of the U.S. workforce, they only represent 27% of STEM workers, according to The United States Census Bureau. Sophomore and co-president of the Girls Who Code club Tess Bowen said this underrepresentation of women goes back many years.

“I think that a lot of the reason is that historically, women were not encouraged — in fact, they’re discouraged from pursuing an interest in science and math,” Bowen said. “I think it has started to change, but it takes time.”

Sophomore Annum Hashmi, also co-president of Girls Who Code, cited gender norms as a cause for women being underrepresented in this field.

“Society is still largely dictated by gender norms, and many women have to choose between a career and raising a family,” Hashmi said. “There are certain ideas about what a woman is capable of which (are) created by gender norms.”

“A reason we can point out is a lack of faith and belief in yourself,” Hashmi said. “That is also just an effect of the lack of representation — if you don’t see role models in that field that are women, you can kind of stop believing in yourself and your own abilities to pursue that field.”

Hashmi and Bowen said the gender gap in STEM also widens during grade school. Research done by the National Science Board largely supports this idea, showing that by the time students enter college, only 21% of engineering majors and 19% of computer and information science majors are women.

“During middle or high school, it’s easy to notice girls will choose to not participate as much in STEM activities and instead move to other areas,” Hashmi said. “It definitely can start at early ages, although they may have an interest in these things in elementary school.”

The Pew Research Center reports half of all women in STEM say they have experienced discrimination based on their gender.

Having grown up in an affluent area surrounded by technology where women are more inclined to enter the field, Bowen said she’s been lucky to not have been discriminated against. But Hashmi said being part of a minority group involved in STEM subjects many girls to discrimination.

“Personally, I have participated in STEM extracurriculars and classes, and I’ve definitely felt the need to prove my worth as a girl in these male-dominated spaces and activities,” Hashmi said. “When I’ve been in all-girls teams during some activities, it feels as though we’re not given the same respect, and a lot of times people doubt our abilities.”

Hashmi said when there are so many boys in a setting with so few girls, girls can feel like they’re being spoken over.

Through their club, Girls Who Code, both say they have been working on creating a safe environment for girls of any skill level to learn coding through projects that interest them.

“Having a safe space is important to ensure that people can ask questions and learn without judgment,” Hashmi said. “Our projects allow girls to work on what they choose and show them that coding has many possibilities and can contribute positively to anything in their life.”