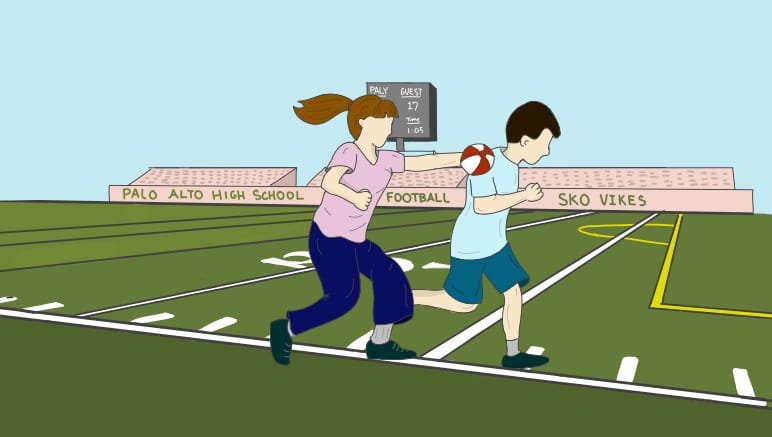 After idling in her car for an hour and a half and spending another 30 minutes hiding behind a bush, senior Malia Wanderer finally made her move, leaping from the shadows and tagging her target with a beach ball.

Wanderer is participating in the Class of 2021 Elimination, a city-wide game played by both Paly and Gunn seniors. Participants are assigned a target and receive a small beach ball, which they must hold on to at all times in order to be safe from being tagged themselves. When a player tags their target, they enter their target’s code into the system. Then that player takes on the defeated player’s target, and the game continues until there is one person left standing.

PAUSD administrators were against holding this annual senior game this year because students would have to break social distancing rules when tagging their target, but senior Jenna Tetzlaff decided to organize the tradition anyway, away from campus, while accommodating COVID-19 restrictions.

“Ever since I was a freshman, I wanted to play elimination,” Tetzlaff said. “Since my class missed out on spirit week, two proms and other senior activities, I wanted to find a way to still feel like a senior, so I made elimination happen.”

Due to the pandemic, the game, which began on March 1, looks different from previous years.

“I heard that around 320 (Paly) seniors played last year, and I knew we weren’t going to match that,” Tetzlaff said. “This year we have around 140 seniors playing which isn’t a lot, but considering the circumstances, I think it’s a great turnout.”

Several rules, such as participants must go outside for an hour a day and wear a mask at all times, were necessary if the game was going to happen this year, she said.

“(Going outside for an hour) is sometimes annoying because maybe it’s a rainy day or you just want to stay home, but this rule is one of the most important rules because if you don’t go outside, you’ll never get tagged, and you’ll never tag your target,” Tetzlaff said. “The game simply can’t be played.”

Every week, Tetzlaff said targets are shuffled, and every two weeks, there are new rules regarding how participants can keep themselves safe with their ball.

Senior Charlize Nguyen, who eliminated nine people prior to being eliminated, was formerly first in the game. Nguyen said she attributes her successes to a creative strategy for tagging her targets, as well as a bit of luck.

“If you have your target’s address, I think a really effective strategy is to ring their doorbell,” Nguyen said. “It’s a bit scary because you don’t know who will answer the door, but usually people don’t think to bring their ball with them when answering the door.”

And some of her attempts have been successful because of their creative, unconventional approach.

Second in the game at one point, Wanderer had six eliminations before being eliminated herself. Wanderer said the game started out slowly for but started to pick up once she got her first target out. To find moments to get her target out, Wanderer said she had to do some digging online and get help from her and her target’s mutual friends.

“I’ve searched up their addresses on white pages –– it’s a little bit creepy,” Wanderer said. “And I’ve snuck outside their house, also creepy. Then I also just (talk) to mutual friends to find out where people are going to be and when.”

Wanderer said she was eliminated shortly after eliminating her seventh target, so she couldn’t enter her target’s code so her seventh elimination was not counted.

“I was hoping my game would last long, but it ended much earlier than I anticipated it ending,” Wanderer said. “I was going way out of my way to find people, hunt them down and tag them, and going on hour-long stakeouts. I wanted to make it to that purge, so I was very disappointed.”

Elimination is one of the few traditional events this year’s seniors have been able to participate in, and Wanderer said she was glad she took part in it.

“Elimination was really fun for me,” Wanderer said. “I was super into the game because getting kills was really exhilarating and super satisfying.”