Junior Noah Boyarsky (he/him) said students often view his transition to being male as something he decided on a whim.

“I think a lot of people who don’t have experience with this just assume that one day I woke up and I was like, ‘I want to be a boy,’ (so) I was like, ‘OK, let’s do that,’” Boyarsky joked.

But the gender discovery process was gradual and deliberate for Boyarsky and many people who do not identify as cisgender. Boyarsky, who is transgender, said he started asking people to use they/them pronouns three years ago when he changed his name, before settling on he/him pronouns about one year later.

“It took years of gender therapy and talking to my parents to make sure I knew all the effects of the medical choices I was making,” Boyarsky said. “I established my goals with my medical team, and then finally I got prescribed testosterone in June this year, which I think was around three years after I came out for the first time.”

But for junior Harvey Vostrejs (he/they), the process of discovery started later. Over quarantine, Vostrejs began to reconsider his gender identity, eventually determining that he was transgender and genderqueer.

“I started to be like, ‘Hmm, maybe I don’t want to be a girl. This feels wrong,’” Vostrejs said. “So I started talking with some people, and they started using different names and pronouns for me to see which ones fit. I eventually settled on Harvey because that one fit best. It was like trying on a pair of pants, and you’re like, ‘Yes, these fit!’”

For junior Rigel Cierniak (they/them), the coming out process was less experimental and more internally reflective. They knew they were not cisgender for three years before they decided to fully socially transition and eventually come out as transgender.

“I had been identifying as gender fluid, as nonbinary, with my internet friends and close real-life friends,” Cierniak said. “But it eventually came to a point where, during quarantine, I realized that having these two identities was not something I could do anymore. So it took me until 2021 to come out to my parents and everyone else at school.”

Being non-cisgender at Paly

Freshman Ryan Dyer (they/them) said students have been largely accepting of their gender identity and are willing to learn and remember their pronouns.

Vostrejs, who came out several weeks ago, said he has also received only positive reactions from friends, family and classmates, who immediately used his name and pronouns.

“The moment I told people, they immediately switched,” Vostrejs said. “It was amazing. It was like a switch flipped, and everyone did it, even people who barely know me. It was the best thing. It made me feel so accepted.”

Boyarsky said he has had a positive experience expressing his gender t school as well and was appreciative of the support he received from friends and teachers.

“I was worried that there would be negative reactions to my transition decision,” Boyarsky said. “(But) most students and every teacher I talked to has been very willing to use the name or pronouns I wanted.”

Every once in a while, though, Boyarsky said he would get some snide comments, especially from people in large groups.

“They would share what my name was before I changed it, which is not something you should ever do for a transgender person,” Boyarsky said. “If you know what their name was before, you shouldn’t say it.”

According to a junior (he/him) who agreed to be interviewed only if his name wasn’t used, Boyarsky isn’t the only person who has had others react negatively to their transition.

“I think people in Palo Alto think that they are very liberal, that they’re super progressive,” the junior said. “And what I’ve noticed is there’s a big shift when you come out and you realize that most people aren’t as liberal or progressive as they think they are.”

This junior said when he came out as transgender, he had friends whose parents did not want their kids to hang out with him anymore. He said even in classes where there are discussions about discrimination in marginalized communities, the topic of gender identity rarely comes up.

“People don’t want to learn the proper terminology because they’re like, ‘It’s such a small population, why does it matter?’ — I see that a lot in Palo Alto and at Paly,” the junior said. “They’re not aware that they’re saying harmful or offensive things. And when you tell them, they don’t register it, and they don’t feel the need to change.”

“I think the older students, the upperclassmen, have been around different types of people long enough that they’re pretty good about being respectful,” Kelly said. “But you do get some of the people coming from middle school who make jokes like ‘My pronouns are nor/mal or attack/helicopter.’”

In her time working in Paly’s Wellness Center as one of its Outreach Workers, Whitney Aquino (she/her) has had the opportunity to interact with students who come to her with all kinds of needs, from those who are looking to take a break from classes to those who want to access mental health services.

“The coming out process sometimes never ends,” Aquino said. “And that can be stressful, so learning how to manage stress in general — not just with coming out but with navigating a lot of other situations — is important.”

For students who want a safe and supportive environment within campus, the Wellness Center isn’t the only place they can go. QSA, the Queer Straight Alliance club, offers opportunities for students to have open discussions about gender and identity topics, ask questions anonymously to the club leaders or watch movies and eat lunch together.

QSA adviser and social sciences teacher Eric Bloom (he/him) said the club allows students to interact with others like themselves in a way that creates a forum for learning about identity.

“There’s kind of that hidden curriculum that allows kids to learn how to navigate the world as a non-conforming person,” Bloom said. “That space also allows for deeper conversation about feelings and love, and also things like how to discuss these issues with parents.”

And Vostrejs, the vice-president of QSA, said for kids who are queer, social media is an especially useful tool that can normalize being non-cisgender.

“Social media is a great way for queer kids to bond because a lot of times in certain places, queer kids don’t have a community — they can’t be out; they can’t ask for help,” Vostrejs said. “And the internet allows them to come together and meet people and know that they’re not alone.”

Aquino said the sense of acceptance on social media can be especially helpful for non-cisgender teens by showing them there is more to being a teen than the negative mental health statistics often presented about them.

The California Healthy Kids Survey from the 2019-20 school year, which surveyed 71% of the class of 2023, found that close to 6% of current PAUSD juniors did not identify as cisgender. 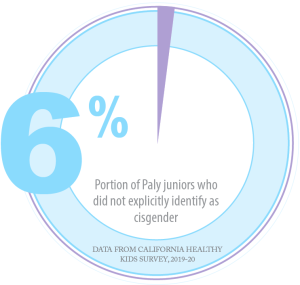 “Our hope (is) that we can help give students a better understanding,” Hubenthal said. “People who aren’t close to people who are transgender may not be able to empathize with them as easily, so we want to give them exposure to the concepts.“

The anonymous junior quoted earlier said educating students about transgender and nonbinary people can be a crucial step in making school a more inviting space.

“I think the biggest issue that we face in the trans community is the fact that people are not educated,” the junior said. “I think when you try to explain it, they’re just kind of like, ‘I’ve never heard about this so why do I need to learn?’ But when you finally get through to people, it can be lifesaving.”

Bloom, who has taught at Paly for 24 years, said the need for student education on the subject of gender stems from a disrespect for nonbinary genders that has only recently faded. He said the environment at Paly when he first started teaching was not accommodating to nonbinary students.

“Twenty-four years ago, gender performance was a big deal,” Bloom said. “If you didn’t fit into either gender, there would be a lot of questions. There was both active and passive hazing at that point.”

Bloom said he thinks Paly and PAUSD’s work toward fostering a safe school environment for non-cisgender people has succeeded so far.

“There’s been an ebb and flow based on personality of classes, but the trend is that the school is getting more accepting and focusing less on those ideals,” Bloom said. “For example, it’s no longer normative to bash kids for being gay or nonbinary. In fact, it’s the opposite, where we see that, and we’re angered by it.”

Ana Reyes (she/her), the PAUSD Coordinator of Student Support and head of the district’s LGBTQ+ Council, said PAUSD has focused on making campuses increasingly friendly and accommodating for non-cisgender students.

“It is definitely our first priority to make sure that anyone can use the facilities they need,” Reyes said. “Right now there are only two elementary schools without gender neutral bathrooms in the district, and all middle and high schools have them.”

While that may be the case, Kelly said there are only a few gender neutral bathrooms easily availability to them at Paly, such as the ones in the Student Center and the gym. The others stay locked or are relatively unknown, such as the ones in the MAC and the library. Due to the inaccessibility of gender-neutral bathrooms, Kelly said they try to avoid using them while at school.

“It’s actually a reason that I, as well as a few other trans friends, don’t really drink water while at school,” Kelly said. “If you drink water, you have to use the bathroom, which is always an inconvenience. If you’re in math class and need to use the bathroom, you’ll have to go all the way across campus, and then (your) teacher is like, ‘Where have you been for the past 10 minutes?’”

PAUSD also allows students to change their registered name regardless of whether they have done so legally. Reyes said the district hopes to allow for even more freedom of expression in official school registration.

“We’re also working with (Infinite Campus) to be able to include pronouns and some other accessibility features,” Reyes said. “Right now you can put in a nickname. It’s a start, but it’s not enough yet.”

Hubenthal, the Living Skills teacher, said another important step in the process of improving Paly’s environment for non-cisgender people is to address ignorance and hate on a personal level, including correcting careless statements and using accurate pronouns and names.

For Vostrejs, the work Paly has already done to be supportive of his transition has helped him feel comfortable with his gender.

“Honestly, I’m happy with how I am right now,” Vostrejs said. “Maybe one day I’ll want to get top surgery, but for now I’m happy with binding. I have no interest in going on testosterone or anything, and I’m just happy with who I am.”