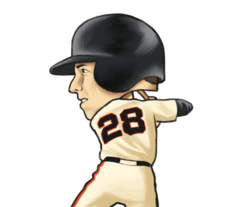 “Before the game starts, when the Giants lineup is introduced, there is a palpable electricity and anticipation throughout the ballpark to hear Posey’s name be called,” Julian Galindo said. “Any Giants fan will tell you if you are at a Giants game, you go to see Posey behind the dish; we don’t want no backup catcher, we want Posey. He’s the guy you’re there to watch.”

Galindo said that Posey has always been at the forefront of the team, and that he has always seen Posey as a leader and a veteran for the Giants.

“He was definitely the main guy, the star for the Giants, especially for the public and for the fans. He was always there from the beginning and was always a Giant, and he led his team to a lot of success in his years in the game.”

Posey helped the Giants win three multiple World Series titles in his 12 years with the team and won Rookie of the Year in 2010 and MVP in 2012. He stayed with the Giants for his entire career, spanning from 2009 to the end of 2021.

This month, Posey retired, citing his desire to spend more time with family and travel less. This came as a huge surprise for baseball fans all over the country, including devoted Giants supporter freshman Cormac White.

“Over the last 10 years, he’s been the heart of our team and the Bay Area,” White said. “When you think of role models for Bay Area sports, you think of Buster Posey. He’s a huge part of the team, and I think we are all sad to see him retire, but I understand it if that’s what he needs to do.”

Posey’s retirement won’t just affect the performance of the Giants team and the spirit of fans,  Oliver Marburg, co-host of sports podcast CO Sports Talk, said. Marburg said Posey’s impact on the baseball community was monumental because he was an idol for young kids growing up playing sports as well as older kids trying to play at the college level and professionally.

“Young kids growing up in the Bay Area that want to play baseball look up to Posey because he represents homegrown talent, drafted by the Giants and brought up through the system,” Marburg said. “He’s just representative of trusting the process, and that’s a real motivation for kids all the way up to the college level. He’s really the blueprint for student-athletes trying to make it to the pros, and I think that’s part of what made him such an icon for kids.”

Posey will be missed by many fans, but his legacy will remain, Marburg said.

“He was really that guy,” Marburg said. “He did everything for the team but even more for the community, and that’s something to be proud of. I know he’s gonna miss the game, but the game’s gonna miss him more.”