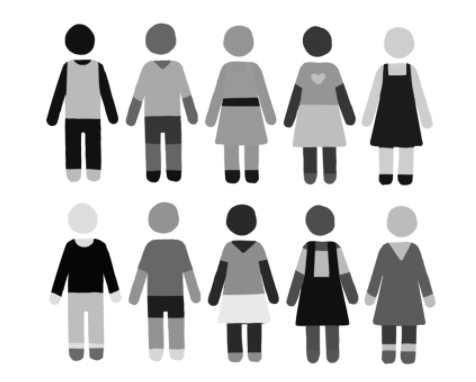 “Being with her empowered me and made me feel more confident in myself; it made me start reconnecting with the parts that I had lost touch with,” she said.

Multiracial students make up 6.3% of Paly’s student body and the population of U.S. citizens who identify as multiracial raised from 3% to a little over 10% in the past decade. And with the holiday season underway, the different cultures in multiracial families begin to become more apparent.

Sankararaman, who is Indian, said her relationship with her white partner, Alyssa, has created avenues for learning for both of them.

Being a part of a multiracial relationship comes with complexities, with things like holidays, traditions, foods and languages. According to Sankararaman, a balance exists between her partner’s culture and her own in their house.

“Diwali just passed a week ago, and Christmas is coming up,” she said. “If you look at our house right now, the decorations are actually a cross between Diwali and Christmas because we wanted both represented in (our home).”

Similarly, senior Kenji Tella, who is Japanese and Indian, said even though he is of mixed ethnicity, there is no dominant culture in his home.

“At home, neither culture is very prominent,” Tella said. “However, there are some Hindu and Buddhist religious and cultural decorations here and there.”

But Tella said he sometimes feels alienated due to his mixed ethnic background when visiting other countries.

“When I go to India, I don’t feel as welcome because I look very different, wear different clothes, and don’t speak Telugu,” Tella said. “In Japan, I feel more welcome. I think in part because modern Japanese culture is more similar to American culture and because I can speak Japanese reasonably well.”

Maia Johnsson, who is Jamaican and German, saidshe feels the same way when visiting countries like Africa or Germany.

“When I was in Africa, I felt like I was more white than normal just because my skin color was lighter than most others, and it’s the same when I am in Germany or Europe,” Johnsson said.

However, Johnsson said at Paly, she rarely ever feels unwelcome.

The president of Paly’s Black Student Union, Johnsson said even though she may have a slightly lighter complexion, she is able to understand the struggles and similarities each person shares.

“I feel quite welcomed in both communities –– with other Black people, even though I may not be as dark as them, we all understand what it’s like to not be fully white,” Johnsson said.

And Sankararaman said though she and her wife may look different, that has never been something that they’ve struggled with.

“Between me and Alyssa, I don’t think we even realize that we look different,” Sankararaman said. “I don’t think that’s ever been consciously a part of our thought process, and I think that’s one of the things that made her so different when I met her: that I wasn’t aware. She didn’t make me feel like there were differences in our culture.”

Sankararaman said this may be due to the changing attitude toward multiracial couples.

“I think I’ve had my own biases in the past, and Alyssa has had her own biases,” she said. “I think if we’d met 10 years earlier, it might have been a slightly different story. Maybe we still would end up married, but we might have had some struggles to see eye-to-eye on things.”

The changing attitudes towards mixed people and multicultural, ethnic and racial relationships are progressing for the better, Johnsson said because it leads to a more progressive society.

Johnson said, “Being mixed lets me experience multiple cultures and have multiple perspectives … and even though I don’t look like your average German, I think that people are very open and understanding of mixed families.”