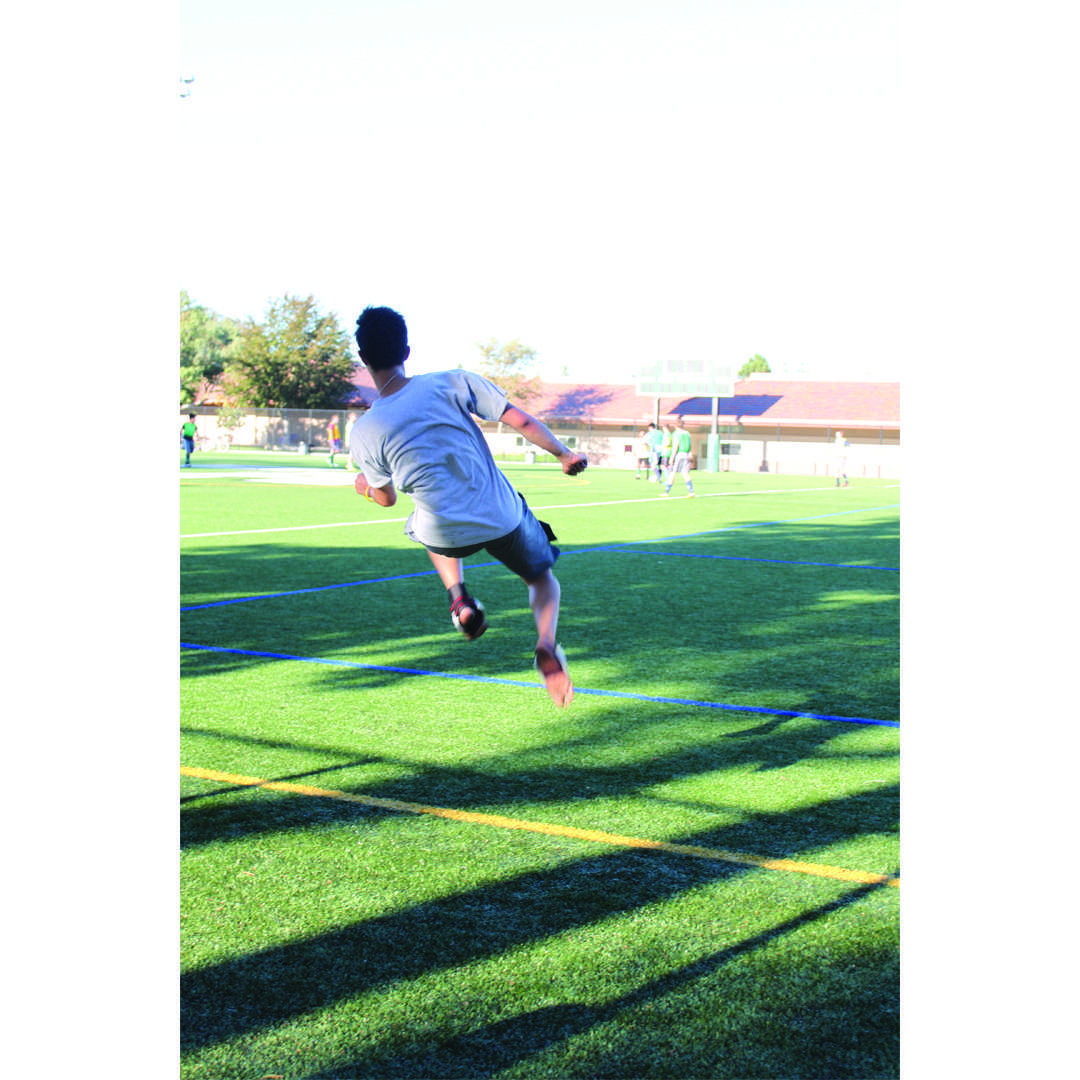 Sports
October 24, 2012
On Tuesday and Friday afternoons, people may stumble across an unusual sight on the Paly lacrosse field: students performing what seems to be kicks and jumps that one would typically see a stunt man do on the set of a Hollywood movie.
In early September, senior Ben Lin decided to gather a group of friends and gear, and set out to teach inquisitive Paly students the ropes of the martial art, taekwondo.

It began with a compromise between Lin and a friend.
“My sister wanted to learn how to play badminton, and I’m friends with [senior] Gavin Chan, the captain of the badminton team,” Lin said. “I talked with him and we worked something out with him training my sister in exchange for me teaching him taekwondo.”

From there, Lin rounded up gear and a few extra friends, and began teaching taekwondo to students. He teaches during the Paly boys’ varsity soccer practice in the back corner of the lacrosse field, bringing full body pads to keep his students safe from injury.
Most of the students learning from Lin are beginners in the martial art.
“Some people come only once in a while. Others come every practice,” Lin said. “There’s a beginner and advanced practice.”

Lin is a first degree black belt in taekwondo and has attempted other types of martial arts.
“I’m not a great fighter, but I qualified for Nationals in my sophomore year, and I currently train at Stanford,” Lin said.

There are many forms of taekwondo. The art may combine combat, self-defense, sport and sometimes meditation techniques.
However, there are two main branches of this martial art: traditional taekwondo and sport taekwondo.
The traditional form of taekwondo was established by the South Korean military in the 1950s and 1960s for combat training. This form specializes in strong strikes and kicks.
Sport taekwondo developed later with a slightly different focus on speed and multiple kicks.
This type of taekwondo appears in the Olympic games with a competition that includes sparring. In Lin’s classes, he chooses to teach the sport branch; however, he considers branching out.
“I plan to move into parkour and flashier things as supplements,” Lin said.

The two to three hour lessons seem to be simple, yet participants describe them as invigorating and physically taxing.
Lin teaches his students standard moves such as types of kicks, blocks and strikes.
“It’s basically informal taekwondo training,” senior Jeffrey Ling said. “[Lin] teaches us how to kick and spar, and people who participate are beginners. There aren’t very many of us.”

Seniors Gavin Chan and Jeffrey Ling and junior Kevin Zhang are just some of the students who attend Lin’s taekwondo lessons. Most of them have joined for the fun of it or to learn something new.
“Some people noticed our training and wanted to join, and so occasionally people drop in and maybe stay,” Lin said. “Jeffrey Ling just showed up one day and he’s a natural [at taekwondo], even though he only comes half of the time. He just learns kicks crazy fast.”

For Chan, he attends Lin’s classes to kill some free time and has enjoyed it ever since Lin started his lessons.
“[Lin] is really good at taekwondo,” Chan said. “We had some time to burn after school, so he invited a few people to join him. He just teaches us basic kicks and exercises once a week.”

In the span of two hours, students are able to learn about the art and will practice their newly acquired moves on each other in full gear.
Lin teaches not only combat moves, but also certain types of kick jumps. Students are either placed to fight against Lin or other participating students. Lin then helps the students focus on how they can improve their technique.
“Generally, we review what we learned the last week and practice it in the beginning,” Zhang said. “[Lin] then teaches us new material and we end with practicing the kicks on each other. It’s pretty interesting and is a good way to end the day after all of the tests and classes at school.”

Lin has found enjoyment through his lessons and is enthusiastic for his teachings in the future.
“I’m used to teaching martial arts and I enjoy it,” Lin said. “Being a black belt means you’re expected to advance the sport, so teaching is one way of me giving back to the art.”