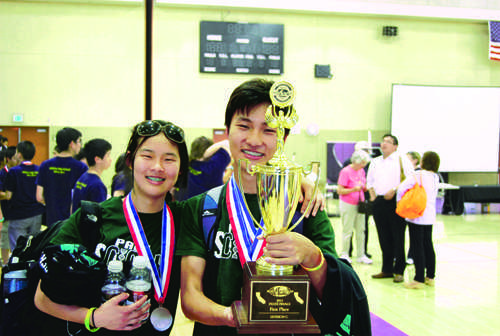 For the first time in its history, Paly’s Science Olympiad team (Scioly) is on its way to nationals. The group of 15 students began their journey last November and has been working together continuously since then.

Paly’s first victory came when they beat out 30 other schools at the regional tournament. From there, the team went on to the Northern California State Tournament, which they have never won, and had to take on national powerhouse and the team’s biggest rival Mira Loma High School.

“Our goal for the past two years has been to beat Mira Loma and go to Nationals,” junior logistics president Grace Lin said.

Early on in the competition, it did not seem as if Paly would be able to pull off the upset.

“As we checked in on each event as they finished, it didn’t seem like we were doing well enough,” Lin said. “A couple events that we were relying on to win first weren’t doing too well, or so we thought.”

As the competition dragged on, it became clear that it was going to come down to Paly and Mira Loma.

“I was tracking the rankings, and we were super close to Mira Loma the whole time, so the energy was crazy,” Lin said. “It all came down to how badly we failed the events we didn’t place in, and how badly they failed in the events they didn’t place in.”

In the end Paly performed just well enough to eke out a one point win. Senior engineering president Jeffrey Ling had been on the team ever since sophomore year, losing to Mira Loma by one place two years in a row.

“Getting second place in the last few years at states was frustrating, since it seemed as if we couldn’t overcome the dominance of Mira Loma High School,” Ling said. “When I found out that we won this year, I was incredibly happy and almost in disbelief. We had finally achieved what had seemed impossible, and I could not be more proud of the team that has made it happen. Making nationals is a historical moment for Paly Scioly, and I am overjoyed to be a part of this.”

Paly’s win not only allowed the team to advance to Nationals but also stopped Mira Loma’s eight-year winning streak.

“As we walked down the bleachers, the rest of the teams gave us a standing ovation,” Lin said. “I think probably because it’s been eight years since anyone but Mira Loma has won.”

Making this win even more remarkable is the fact that this year’s team has made its improbable run with 10 new team members.

“Our team was very strong overall this year, and everyone put in an extraordinary amount of effort to prepare for the competition,” Ling said. “Team members met consistently every week, putting in many hours studying, practicing and working on engineering. Everyone on our team works well together and strongly supports each other, and there were many instances when individuals put the team before themselves.”

Going forward the team is entering uncharted waters, as a Paly Science Olympiad team has never advanced to Nationals.

“For nationals, we just need to continue our streak of excellence that led us to the states victory,” Ling said. “However, an issue we did not anticipate at the beginning of the year is the immense cost of funding a full trip to the competition, not to mention the costs needed to improve our engineering events to compete with schools of the national caliber. We are currently trying to find donors and sponsors to cover these costs, but otherwise I anticipate another excellent performance for our Scioly team.”

Even after Nationals the team holds a high amount of promise for the years to come.

“The team currently has a significant number of sophomores, so future teams have a lot of potential and I have high hopes for coming years,” Ling said. “Given the level of excellence I’ve seen from everyone this year, I have faith that Paly SciOly can win states again next year or the year after that.”