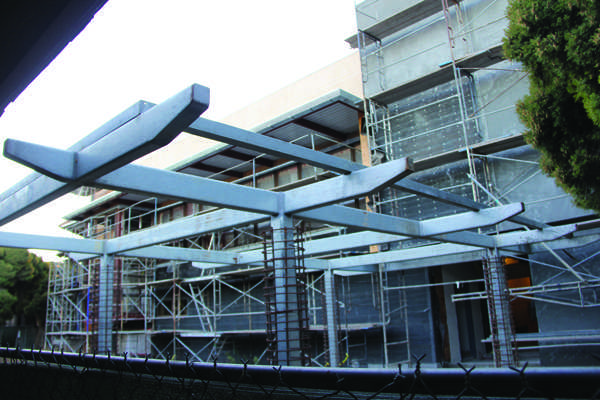 The constuction of the new media arts building is scheduled to be done January or February 2014. This building will have rooms personalized for each publication.

The construction sites at Palo Alto High School are progressing as expected, running on course for its goal of breaking ground in mid-December and having a few classrooms move in during January and February.

“In our last steering meeting on Aug. 20, we received a construction update that the media arts classrooms are still scheduled for December completion,” Principal Kim Diorio said.

Diorio also stated that the completion rate of the math and social science building varies from that of the media arts building.

“I know that the classroom buildings where the math and social science [classrooms are going to be] is a little bit more ahead of schedule,” Diorio said. “They’ve just had more men working on it.”

Diorio hopes that the buildings will be furnished into classrooms by January or February at the latest. She also hopes to receive suggestions from various teachers and community members of which materials to furnish the classrooms with.

“We will be working with teachers and staff on what that looks like for us, and how quickly we move to make it into a classroom environment.” Diorio said.

The buildings were projected to be finished by December 2012 but was delayed to January 2014.  And as completion nears, Paly students are excited for the move in.

The new media arts building will feature a headline ticker running across the outside of the building. In addition, the building will also feature studios for InFocus and personalized rooms for each of the publications.