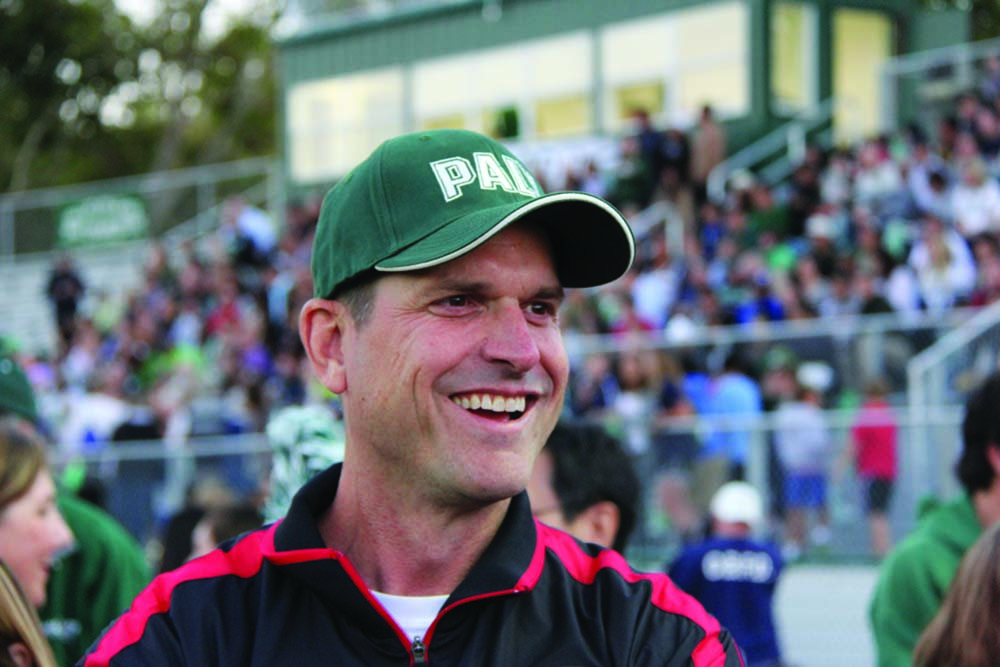 Viking Stadium opens with a bang

“The PTSA has been working really hard to make this cool, and I’m really excited to see how this turns out,” senior class president Audrey DeBruine said.

ASB was also working to promote the event, ensuring that the school community received regular updates on the details of the opening ceremonies.

“[ASB is] kind of on the student end, making sure the the students know what’s going to be happening,” DeBruine said. “We bought pompoms for the first thousand fans, an interactive gift so the players can see the support of all the fans.”

The evening started off with a performance by the Paly pep band, and then proceeded on to an honorary ribbon cutting ceremony. A group of parents, students, cheerleaders and dancers held a banner inscripted with “Viking Stadium Opening 2013,” as Coach Earl Hansen and Principal Kim Diorio took the honor of cutting the ribbon, welcoming the new stadium to the Paly community.

After the ribbon was cut, an American flag of massive proportions carried out by nearly 125 volunteer students made its way onto the football field. David Sanchez, a producer at e2k Events and organizer of the flag presentation, found all of the volunteer Paly students wonderful to work with, despite the obvious challenge of handling such a large flag.

“It’s been great, all the students have been very cooperative, fun to work with and enthusiastic about the whole thing,” Sanchez said.

Furthermore, students took time out of their school day in order to help prepare for the flag presentation.

“We rehearsed on Thursday for about an hour,” Sanchez said. “Students came on their own time at lunch and volunteered to do it.”

The flag itself has been seen during many 49er football games, according to Sanchez, since e2k works on the production and entertainment of Goldrush games.

“This flag has actually been used on that field, at Candlestick, many times,” Sanchez said.

To top off the opening festivities, former Paly football player and current 49er’s head coach Jim Harbaugh travelled to Paly to perform the coin toss of the very first game of the season. When asked why he decided to come help the VIkings celebrate the new stadium, Harbaugh cited his voluntary obligation to his alma mater, and his old football coach.

“Coach Earl Hansen asked me to,” Harbaugh said. “And when your high school football coach asks you to do something, you do it.”

All kinds of fans came out to support the Vikings, including alumni Viking quarterback Christoph Bono (Class of ‘11).

“I didn’t expect all this [in reference to the opening ceremonies]; I heard they were doing a few different things with the new stadium, but [it] was pretty neat,” Bono said

Overall, the excitement in the stadium provided by the masses of fans coupled with the unique opening entertainment made for an excellent kick-off game for the Viking football season.

“I’m really excited for the opening of the Viking Stadium, I think this is setting a really good precedent for the rest of the year,” ASB vice president Kate Marinkovich said.

And how did the celebration affect the players who took the field afterward?

“It was the best possible way to start off the season, it was quite a spectacle,” senior football player Jack Anderson said.

The Vikings pulled off an impressive win to top off the night, with a final score of 28-0 against San Benito. Harbaugh seems very expectant in terms of the team, believing that the they will be lead to success this season.

“I got a little insight knowledge, I know the quarterback, Keller Chryst,” Harbaugh said with a chuckle. “Prospects are looking good, expectations are high.”